Victoria Miro is delighted to present an exhibition by Sarah Sze.

In Sarah Sze’s new paintings, scaled to Victoria Miro’s Gallery II space, the artist incorporates a wealth of painted and collaged elements and traces of multiple image-making mediums, laying bare the narrative of the studio and the developmental arcs that occur within and between the works. In recent years the American artist has returned to painting, the medium in which she first trained. These new wall-based works continue the artist’s decades-long exploration of the ways in which the proliferation of images – printed in magazines and newspapers, gleaned from the Web and television, intercepted from outer space, and ultimately imprinted on our conscious and unconscious selves – fundamentally changes our relationship to physical objects, memories, and time. 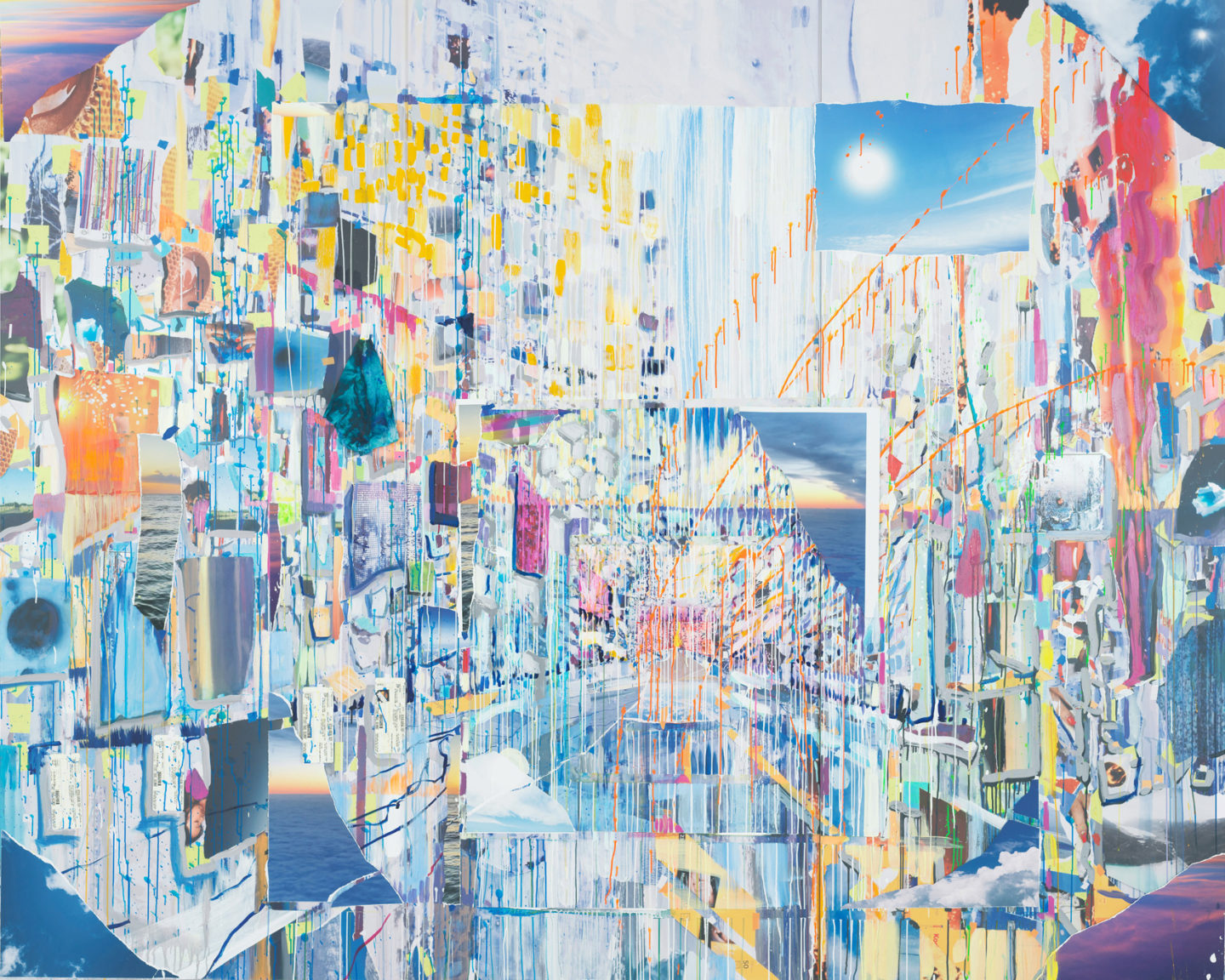 ‘I think of the entirety of an artist’s body of work as one work. Each individual artwork is a window into a chain of ongoing decisions. It’s the space in between those works that is fertile and feeds the evolution of the work.’ — Sarah Sze

Sze’s concept of the image in constant generation, evolution and degradation is highlighted in this exhibition. The paintings are conceived in pairs, revealing two stages of a related image. How images are produced, collected, appropriated and developed to create other images, and how, at the same time, they degrade, or are held, stored or transmitted at different resolutions, is a conceptual starting point. 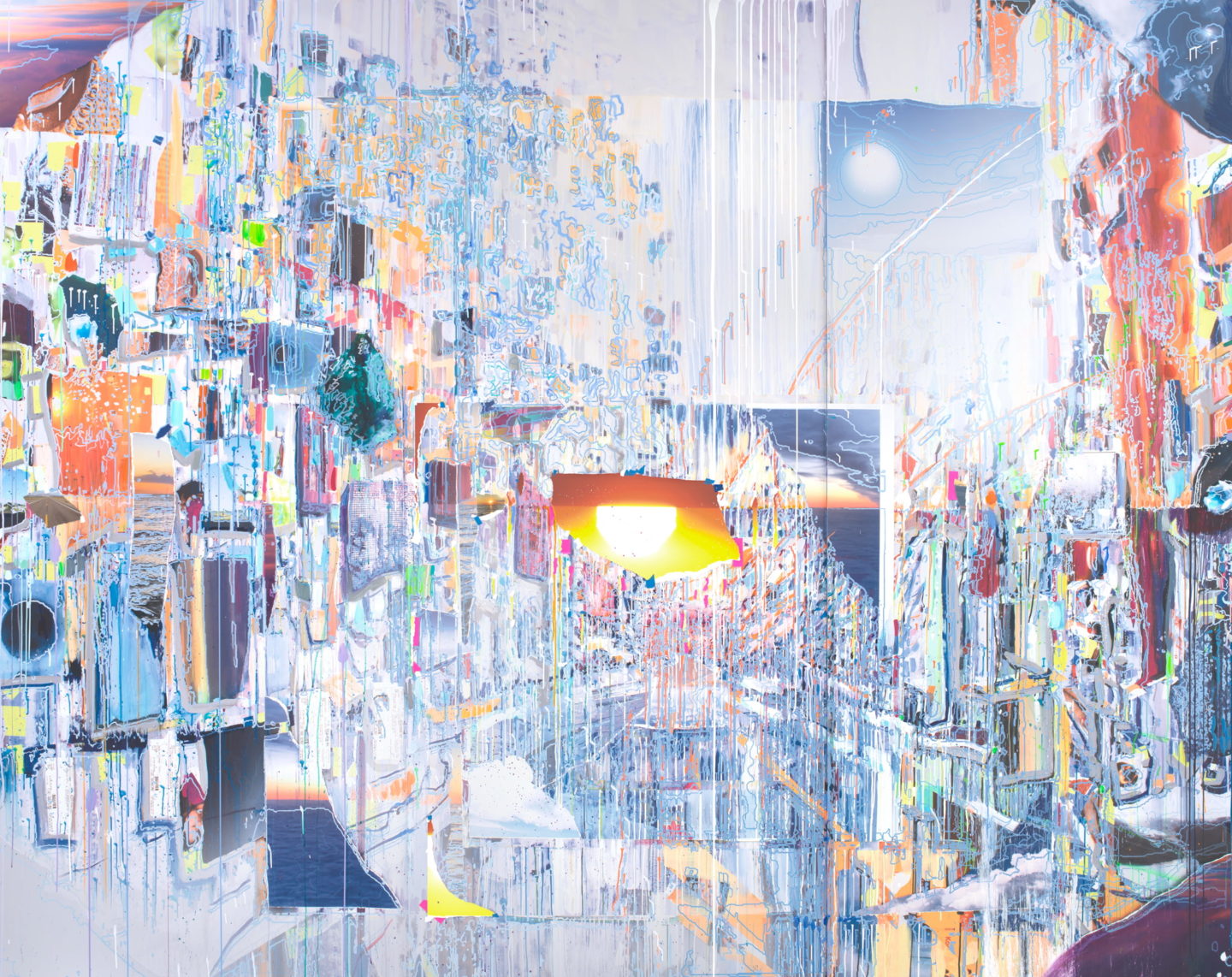 ‘Within the long galley the paintings create a corridor of paired images hung opposite one another. Moving through the space ignites an awareness of physical presence – one’s body is captured between each painting pair, with the paintings themselves hovering at the periphery of vision.’ — Sarah Sze 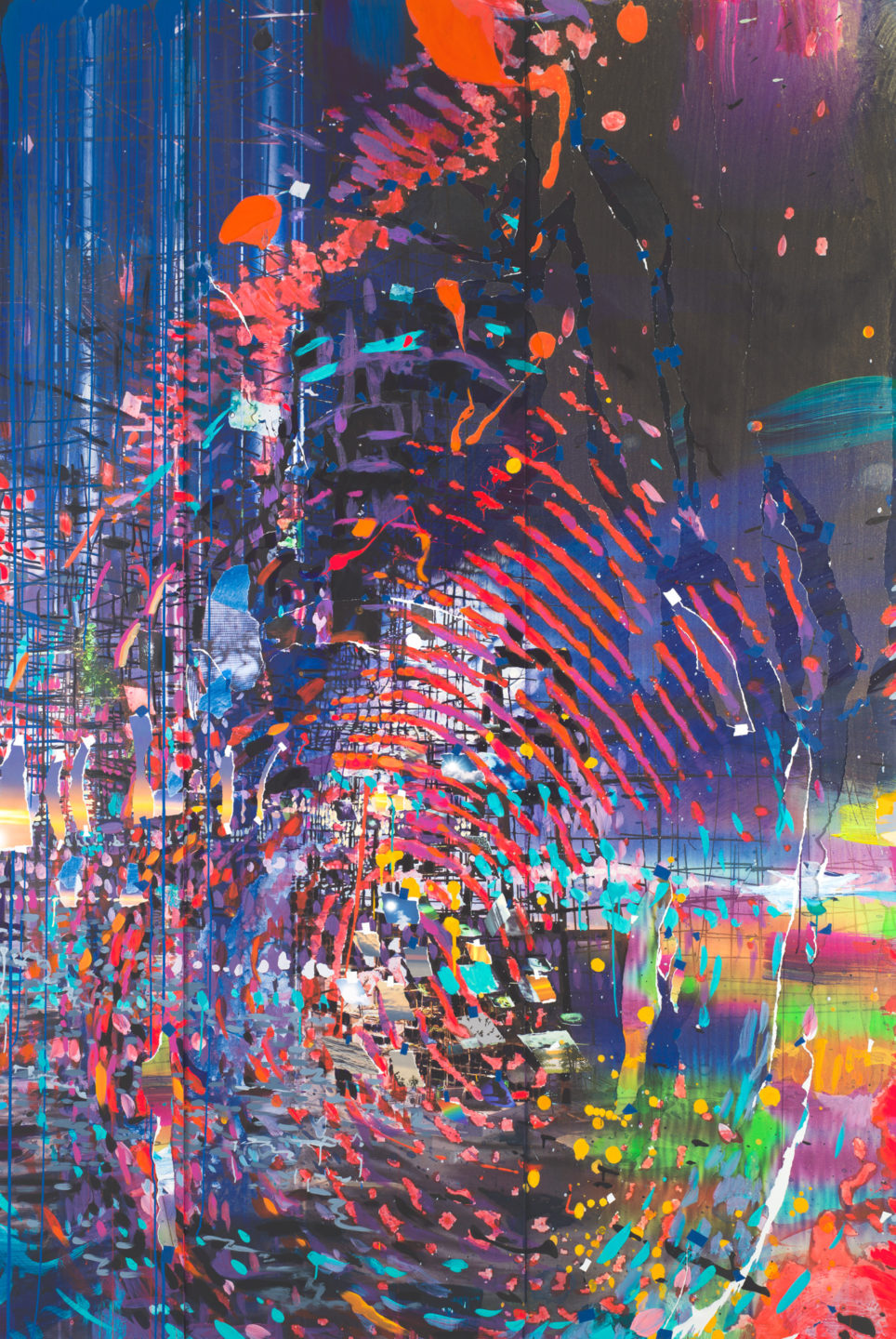 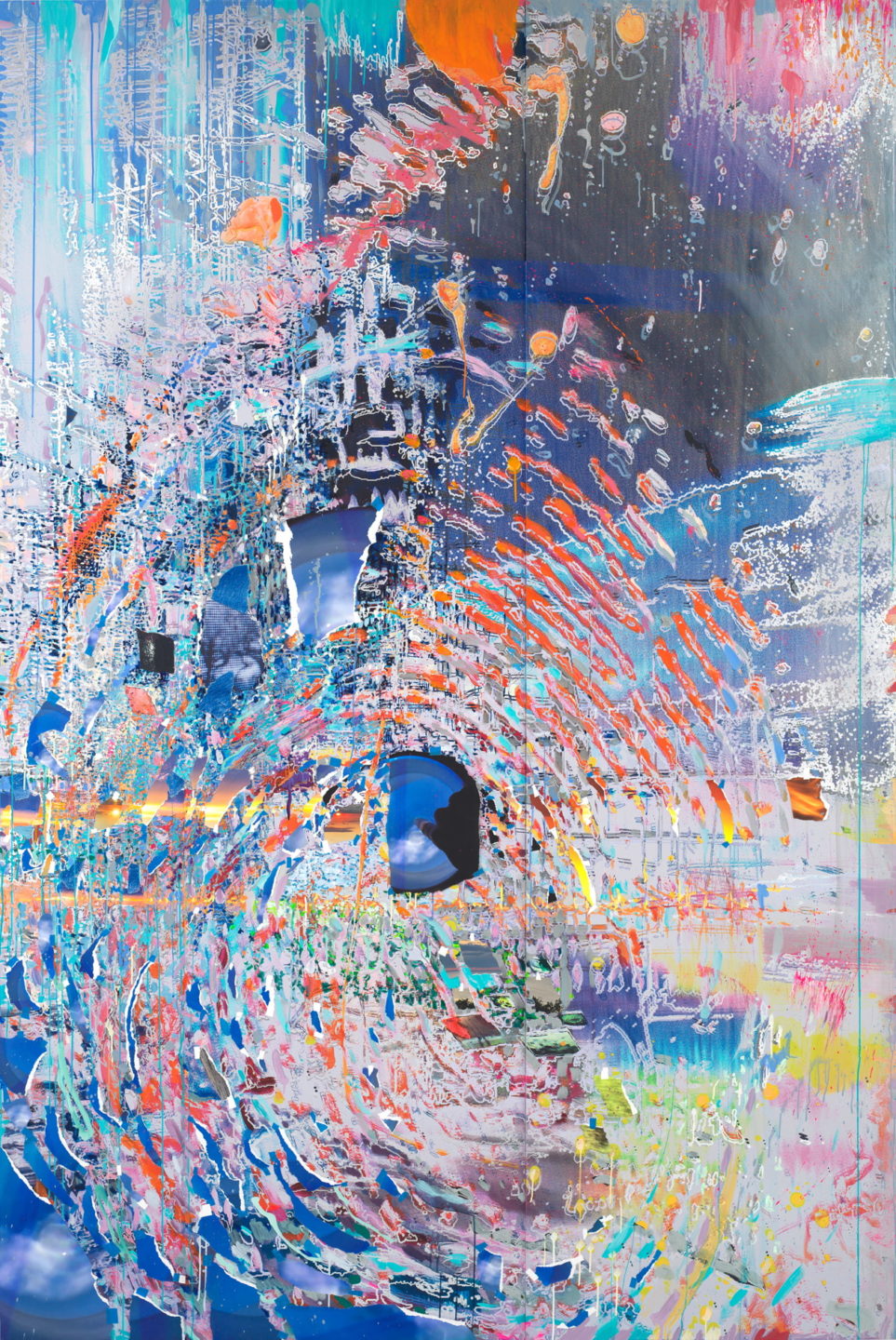 The works converse across the gallery – each registering as a stage in the life of a painting, a summation of thoughts, impulses and decisions of a work’s creation up to that point. Collaged and painted elements repeated, mirrored or flipped back and forth between the pairs of works, along with certain compositional devices and thematic strategies, serve to impress upon us a family resemblance, while a traditional understanding of lineage – the idea of beginning and conclusion, original and copy, or of one work preceding or succeeding another sequentially – is deliberately suspended in favour of a sense of continual cross-pollination. As the artist says, ‘I see both painting and sculpture through the lens of collage and look for a state in which a work is both becoming and degrading before you. I’m trying to find that moment that feels volatile or live.’

‘This choreography of space echoes the paintings’ play with déjà vu, memory loss, peripheral vision and the imprinting of images in our minds and our imagination.’ — Sarah Sze 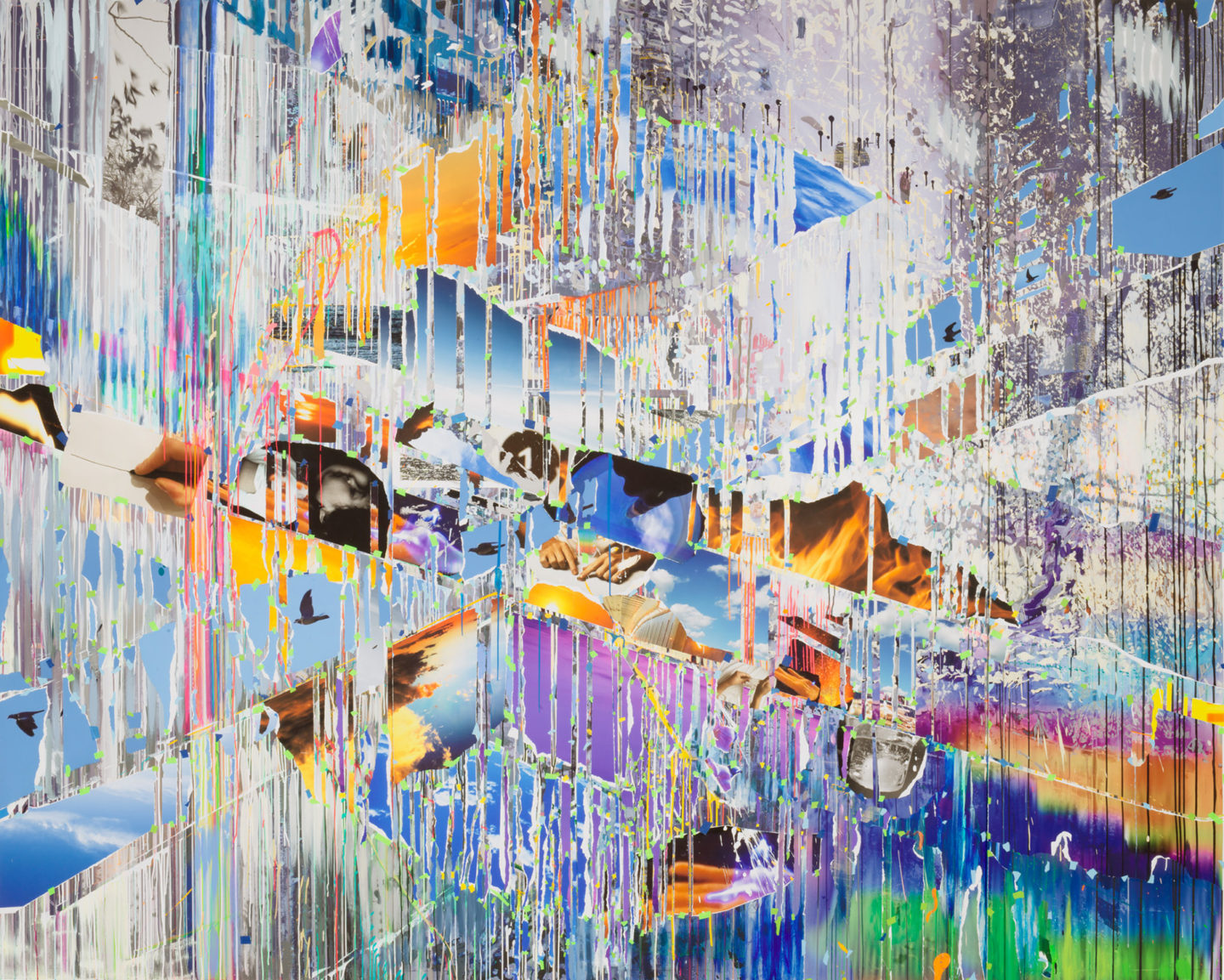 ‘Each pair of paintings is a similar image in a different generation of its evolution.’ — Sarah Sze 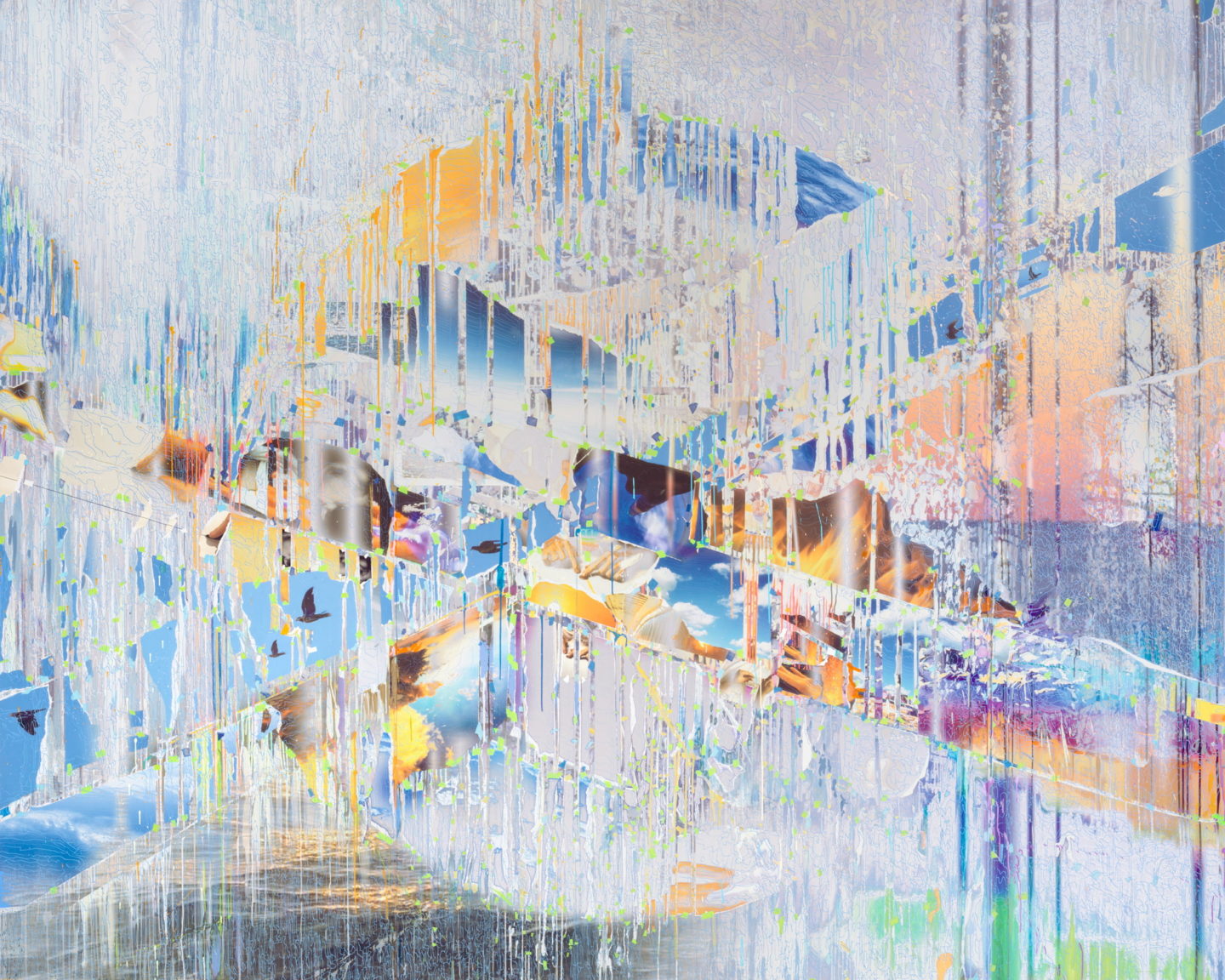 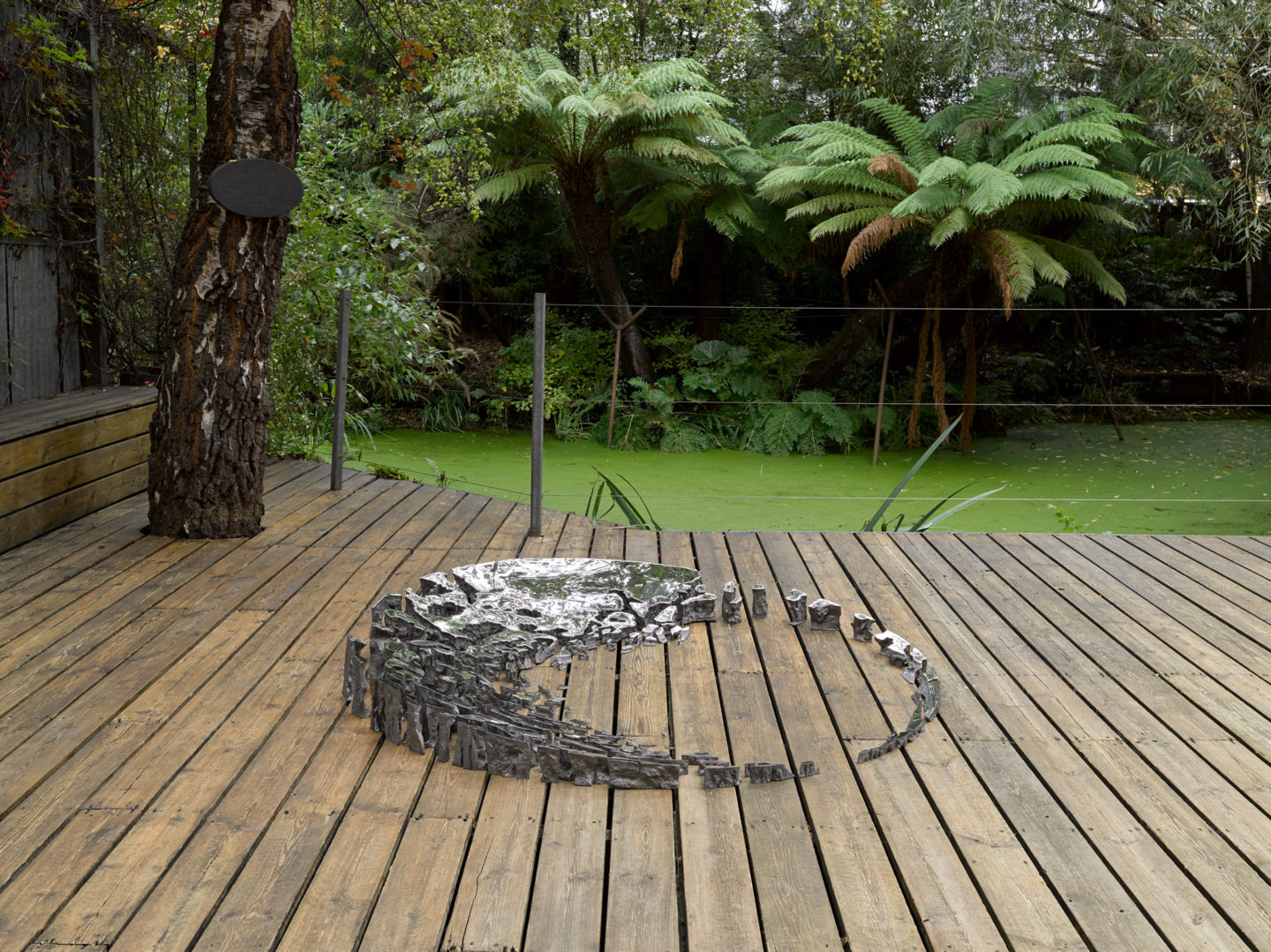 ‘The sculptures camouflage into any space and draw their surroundings into the piece. As you move around the work they transform in real time as a reflection of your location in relation to the sculpture. They have a filmic quality in that they reflect time and weather. On a blue day, they will be blue and on a grey day, grey. Under a tree, the tree becomes part of the palette of the work.’ — Sarah Sze

A number of sculptures, including a work viewable by visitors as they move through the waterside garden, relate to Sze’s landmark installation Fallen Sky, a permanent, site-specific work nestled into a hillside at Storm King Art Center in Upstate New York. Playing with the scale and landscape of the exterior and interior spaces, these mark a trail, first appearing outside the gallery in the garden, then inside the building. The different sizes of the sculptures, meanwhile, invite us to consider how scale changes our physical orientation to an object and to its surrounding space, encouraging thoughts of fragility and flux, positive and negative space, material permanence, entropy and ephemerality. 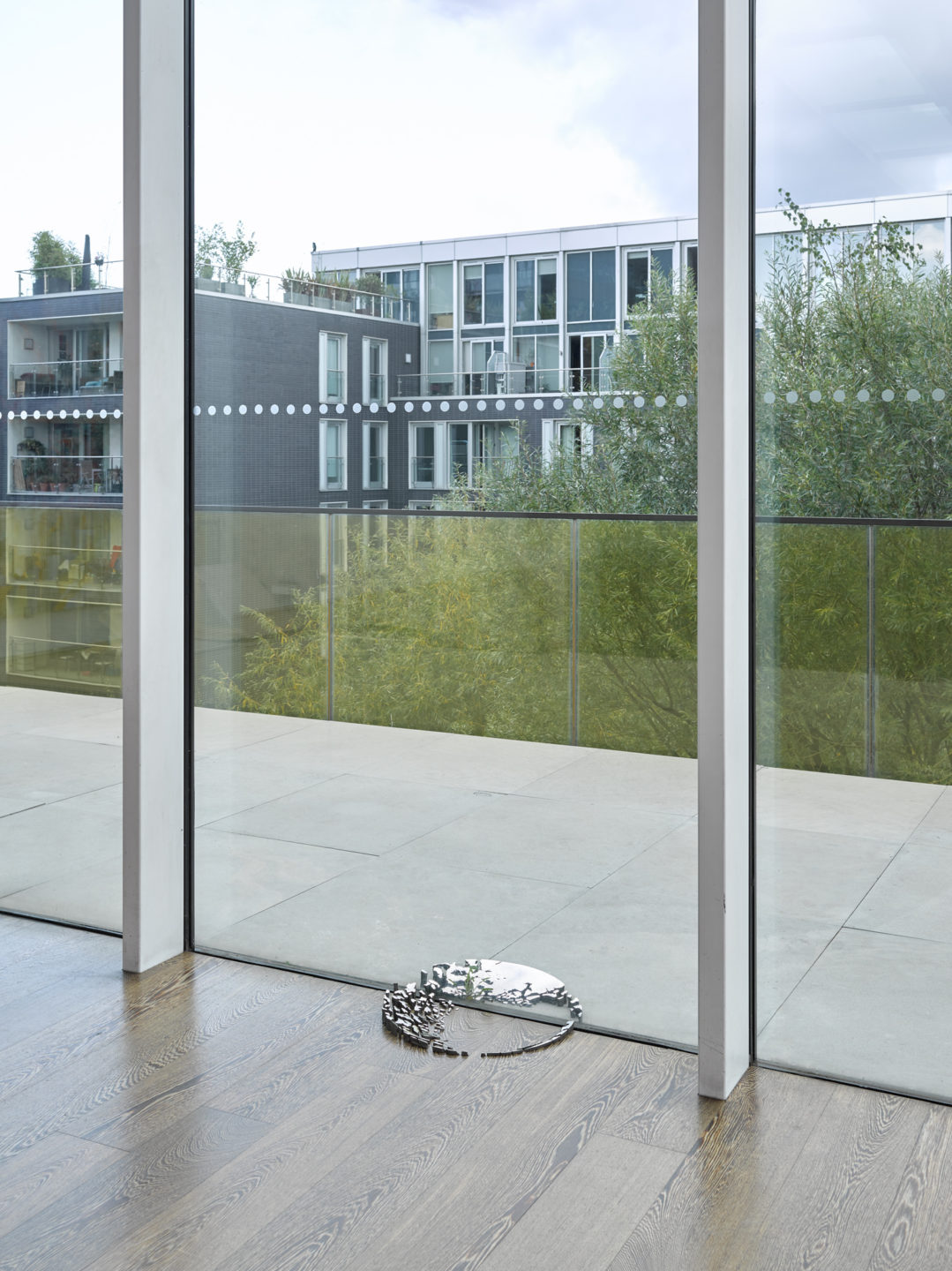 Like Fallen Sky, which was created partly through a process of erosion, the sculptures are inspired by ancient architecture and the language of ruins, merging with their surroundings and appearing as if they were both integral to the landscape and at a point of disintegration. To create the works, a simple pendulum hung from the studio ceiling was employed to create a perfect bowl in clay. The ‘fast’ movement conveyed in this sculptural gesture is starkly juxtaposed with the more glacial time and movement conveyed in the sculptural language of the sides of the work: in the drying process the clay split and cracked until barely holding together. 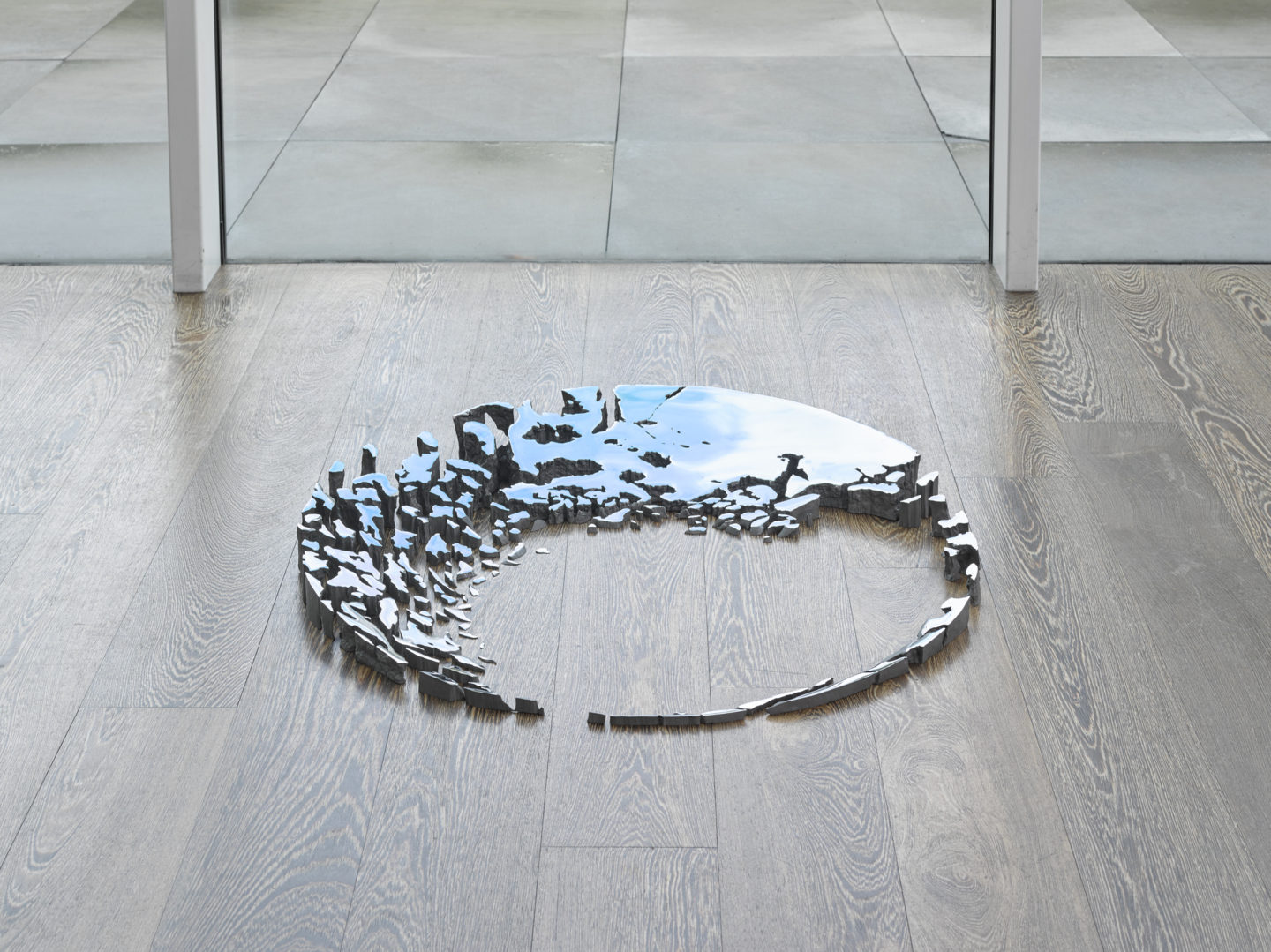 ‘The sculptures reveal how a material is always existing in different states: in a state of both entropy and growth. Your eye actively builds the whole from a shattered multitude of pieces.’ — Sarah Sze

The completed works in stainless steel with reflective mirror-polished surfaces catch an ever-changing stream of passing light and shadow across their multiple individual elements. Sze has referred to the dynamic nature of these works as ‘filmic’ in their ability to reveal ‘how the landscape behaves’, capturing fragments of the surrounding environment and co-opting them, in effect, into a fragmented film in real time. These works operate at a distinct register, collaging and camouflaging into any environment. At the same time, the idea of the fragment – of many pieces forming a whole – relates to Sze’s use of collage in the paintings on view, and her evolving process where ‘the sculptures generate the paintings, and the paintings generate the sculptures.’

Born in Boston, Massachusetts in 1969, Sarah Sze lives and works in New York. Sze represented the United States at the Venice Biennale in 2013 and was awarded a MacArthur Fellowship in 2003. The artist has exhibited in museums worldwide, and her works are held in the permanent collections of prominent institutions, including Tate, UK; M+ Museum, Hong Kong; MUDAM, Luxembourg; The Museum of Modern Art, New York; Museum of Contemporary Art, Chicago; the Guggenheim Museum, New York; the Whitney Museum of American Art, New York; and the Museum of Contemporary Art, Los Angeles. Sze has also created public works for the High Line in New York, the city’s Second Avenue Subway Station, and the new LaGuardia Airport.