Victoria Miro is delighted to present Metamorphoses, the gallery’s first exhibition of works by Hedda Sterne (1910–2011) since announcing representation of the artist.

An active member of the New York School, Hedda Sterne, who was born in Bucharest, Romania in 1910 and fled to the US in 1941, created an extensive body of work that intersected with some of the most important movements and figures of the twentieth century. A bridge between European Modernism, in particular Surrealism, and American Abstract Expressionism, Sterne’s work stands as a testament to her independence of thought, moving freely between figuration and abstraction throughout her long career. Sterne stated, ‘I believe… that isms and other classifications are misleading and diminishing. What entrances me in art is what cannot be entrapped in words.’

The works in this exhibition are drawn from the late 1960s and early 1970s. The 1960s was an especially productive decade for Sterne, her work becoming increasingly abstract, minimal and experimental as the years progressed, while also drawing clear inspiration from natural phenomena and elements of landscape. During this period Sterne began meditating daily, a practice that would have a profound effect on her life and work. In 1961, she spent time at Yaddo as an artist in residence, and in 1963, she travelled to Venice, where she would live and work as a Fulbright fellow until the summer of 1964. Shortly after her return to the US, she purchased a property in the East Hampton Springs community, which became her summer home and studio for several decades, and where she was able to work on ever larger canvases, and experiment in profoundly new ways.

Works on view include important paintings from 1967 created by pouring thinned acrylic paint on to raw canvas, Sterne accepting the element of chance and then returning to the canvases to reinterpret and draw out the forms through the addition of lines or swathes of overpainting. She likened the forms that emerged to the dense folds of lettuce leaves, which for Sterne became metaphors for growth and metamorphosis. Contemporary with the Lettuce works, and a corollary to them, are drawings from a series Sterne would title Baldanders, an invented compound terms of the German words for ‘soon’ and ‘change’. In these, tightly formed objects are centred and contained in large, blank white spaces. Sterne began the drawings with loose movements, allowing lines to flow automatically from her hand to page.

The exhibition is accompanied by a new essay by Anna Lovatt, entitled Inviting Miracles, excerpts below. 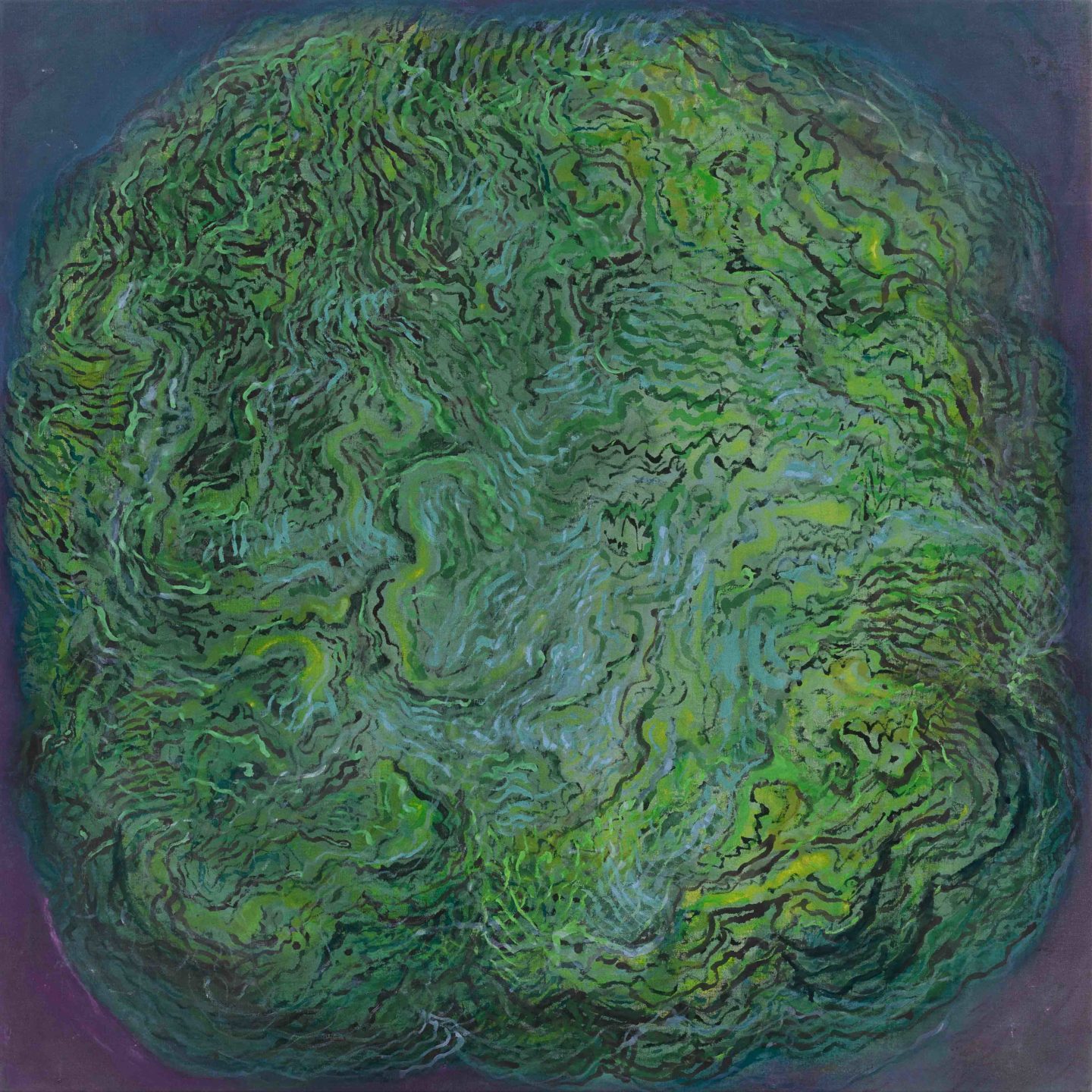 ‘In her notebooks, Sterne described her experience of meditation as “a gathering & inward spiralling … towards a centre distinctly felt, one is and also inhabits”. This motion is captured in the swirling interiors of Sterne’s Lettuce paintings.’ — Anna Lovatt

Significantly for Sterne’s practice, Transcendental Meditation offered a different understanding of the ego to that advanced by Sigmund Freud in the early twentieth century. Whereas the work of psychoanalysis was to strengthen the ego, practitioners of meditation sought to transcend the individual ego in pursuit of a higher state of consciousness. Sterne participated in this cultural shift from a Western understanding of the self to one informed by Eastern philosophy. She did not work directly with a guru, but taught herself to meditate through extensive reading and years of practice. In her notebooks, Sterne described her experience of meditation as ‘a gathering & inward spiralling … towards a centre distinctly felt, one is and also inhabits’. This motion is captured in the swirling interiors of Sterne’s Lettuce paintings, such as Untitled, 1967. Here, lines crumple and curl around one another in roiling, concentric patterns. 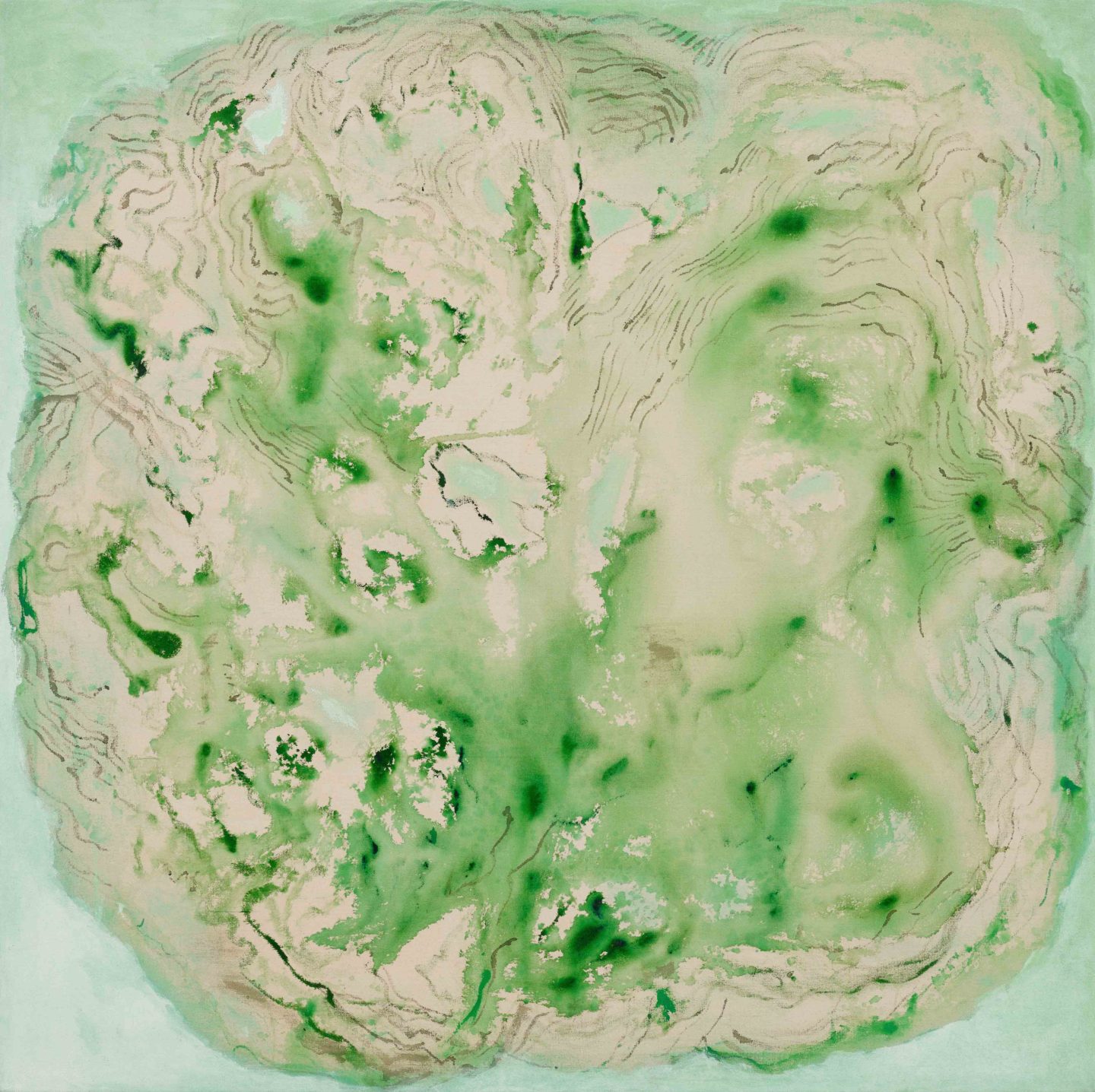 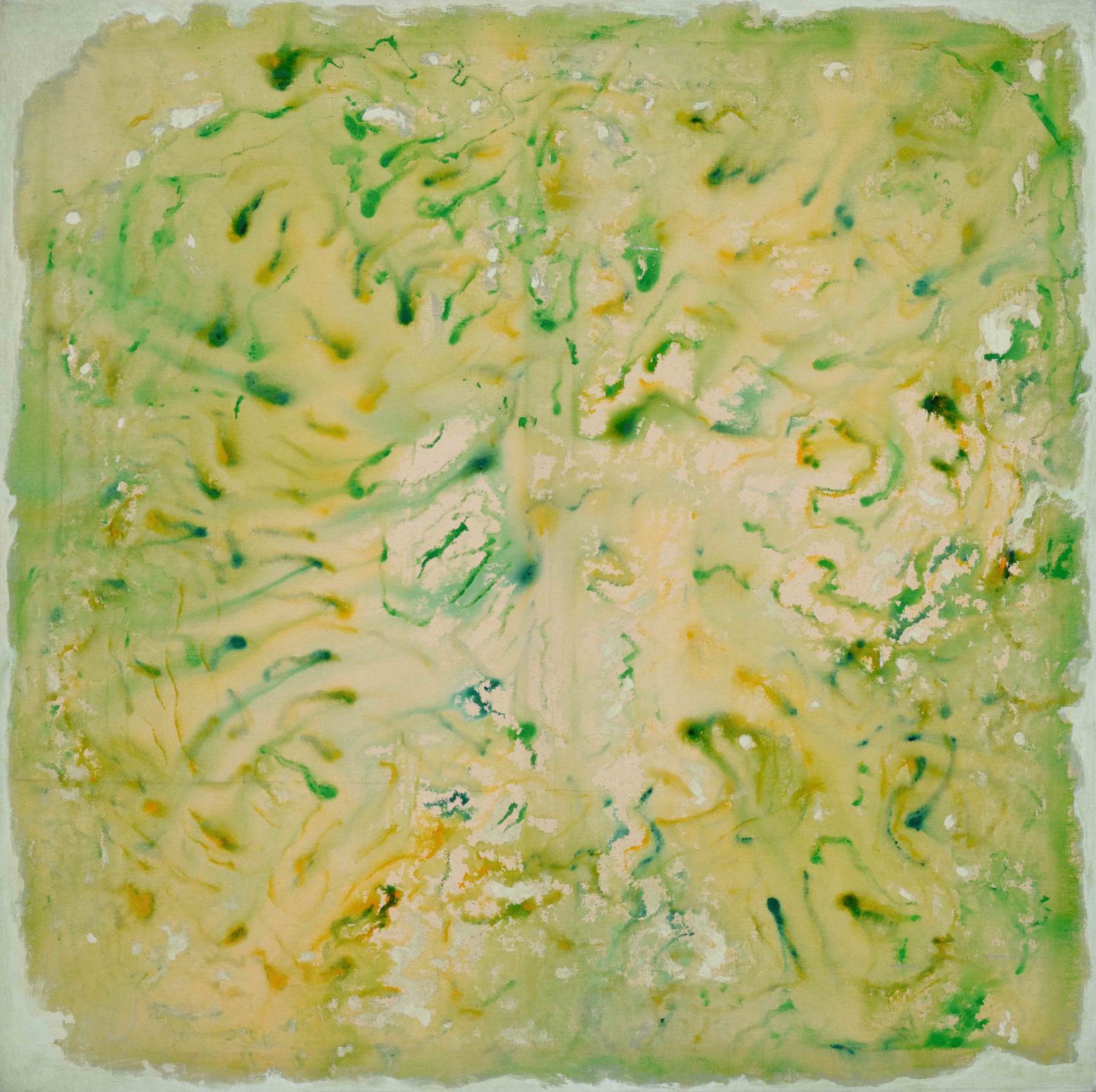 ‘The eye follows these eddies of paint and Sterne’s precise painted lines, which resemble the contour lines of a topographic map. It is easy to lose oneself in the winding pathways of this verdant microcosm.’

In Metamorphoses XIII, 1967, Sterne watered down the acrylic paint so that it took on the qualities of watercolour, coursing in sinuous rivulets of colour. As in her contemporaneous drawings, Sterne responded to these aleatory marks, reflecting upon and embellishing them with more considered passages of overpainting. The eye follows these eddies of paint and Sterne’s precise painted lines, which resemble the contour lines of a topographic map. It is easy to lose oneself in the winding pathways of this verdant microcosm. 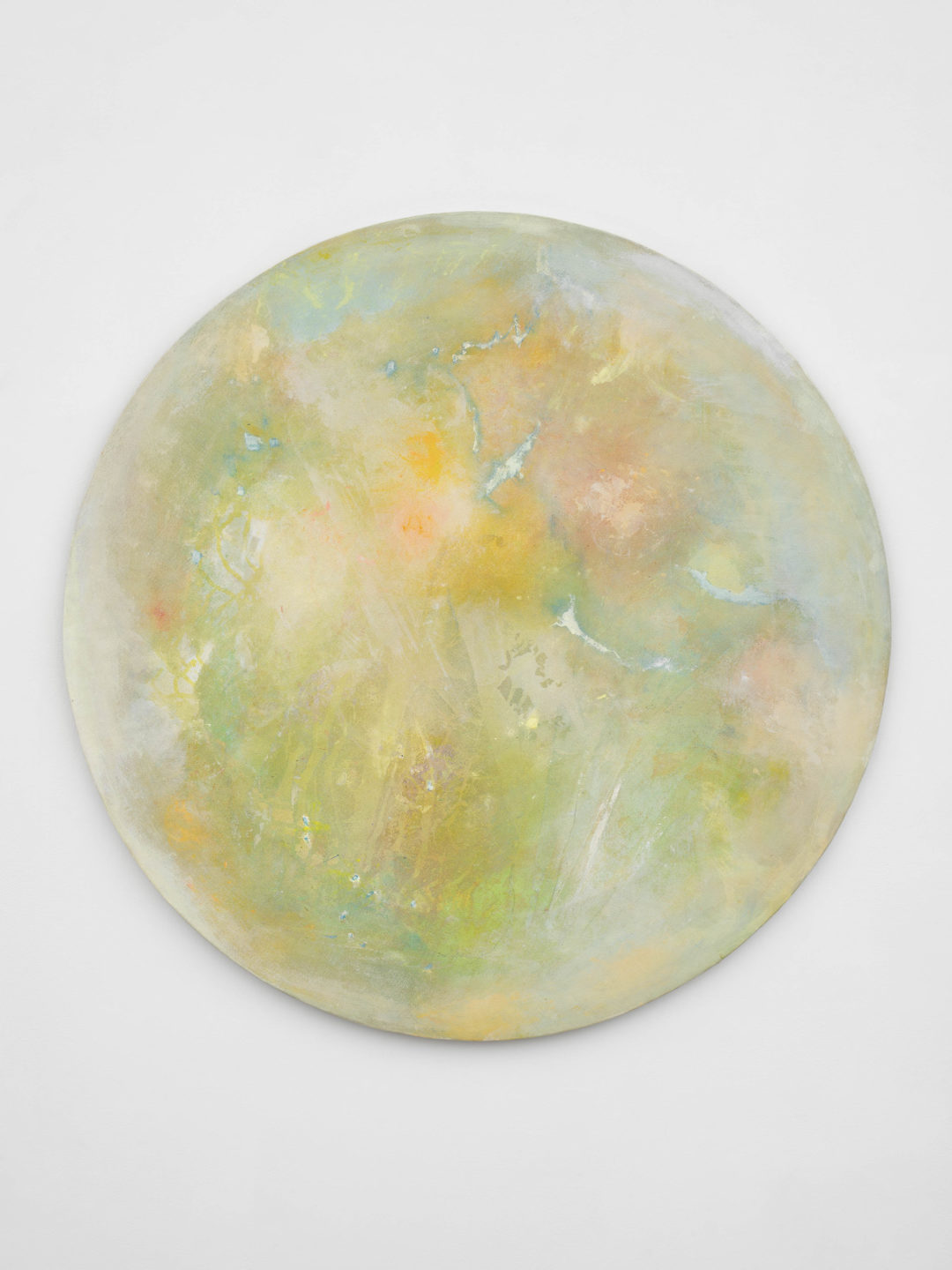 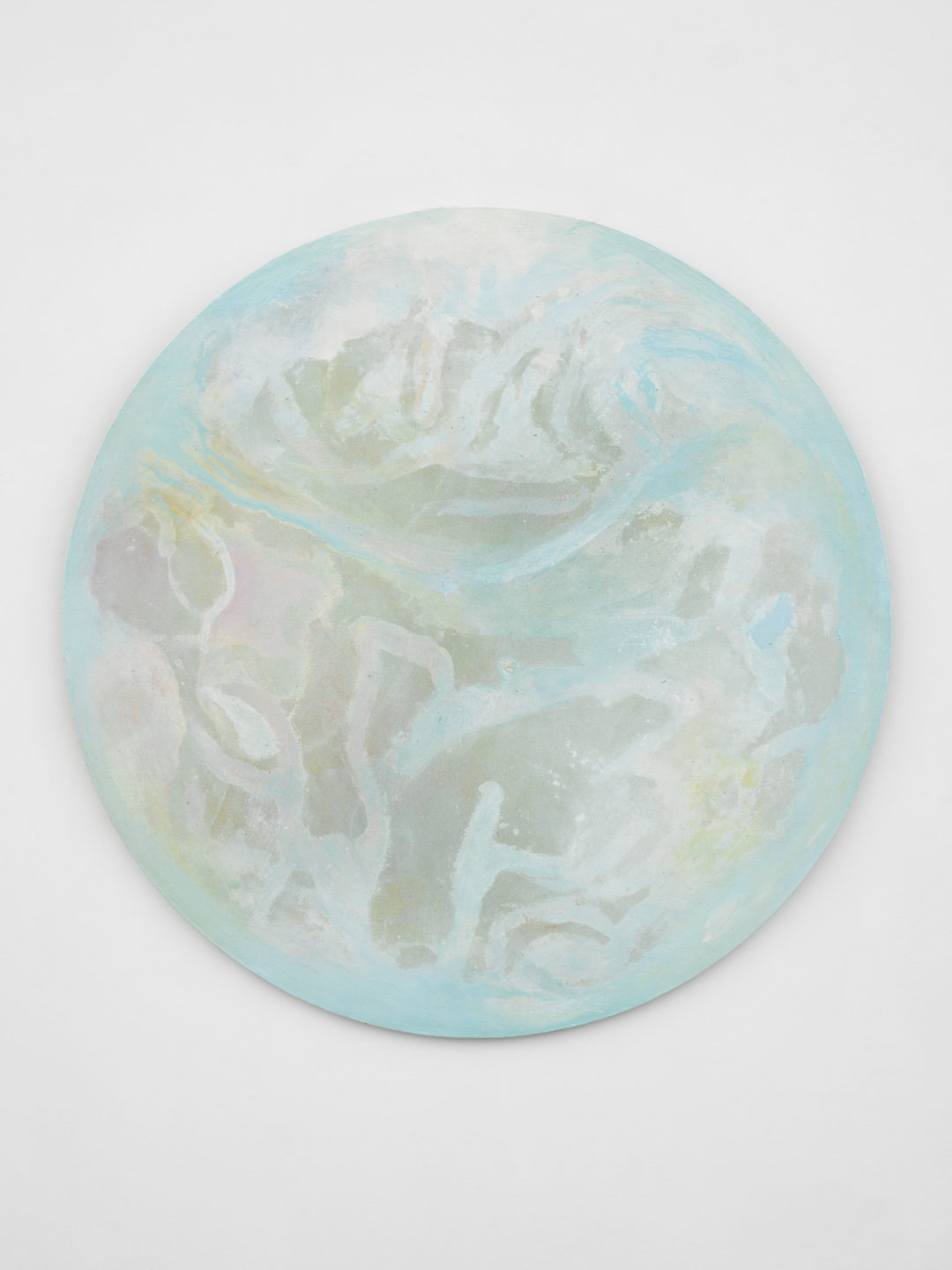 ‘While the circular forms of the Lettuce paintings occupy square canvases, Sterne sometimes adopted a tondo format that was even more evocative of the spiralling sensation she experienced while meditating.’

While the circular forms of the Lettuce paintings occupy square canvases, Sterne sometimes adopted a tondo format that was even more evocative of the spiralling sensation she experienced while meditating. As early as 1953, she had displayed circular paintings on Lazy Susans so that viewers could orient them in any way they wished. Sterne suggested that later paintings such as Untitled (Tondo), 1973, and Untitled (Tondo), 1974, would ideally be mounted on a mechanism that makes them turn slowly before the viewer’s eyes. Even when static, these paintings appear to be in flux: ever-shifting, opaline fields of colour and light. The city of Venice, where Sterne held a Fulbright fellowship in 1963–64, is an apt context in which to view these iridescent works.

‘This drawing demonstrates the ease with which she could move between “see[ing] line as a pull of energy, and the next moment as a present object’’.’

In the centre of Untitled (Baldander), 1970, desultory lines turn back on themselves or trail off to nothing, deposited by an errant hand moving distractedly across the page. Yet on either side these lines coalesce into robust, densely-worked forms that unfurl towards the viewer with startling clarity and intentionality. This drawing demonstrates the ease with which she could move between ‘see[ing] line as a pull of energy, and the next moment as a present object’. Sterne’s technical pen facilitated precision but not erasure, meaning accidents had to be incorporated into image, prompting its burgeoning forms to swell, contort, and expand. 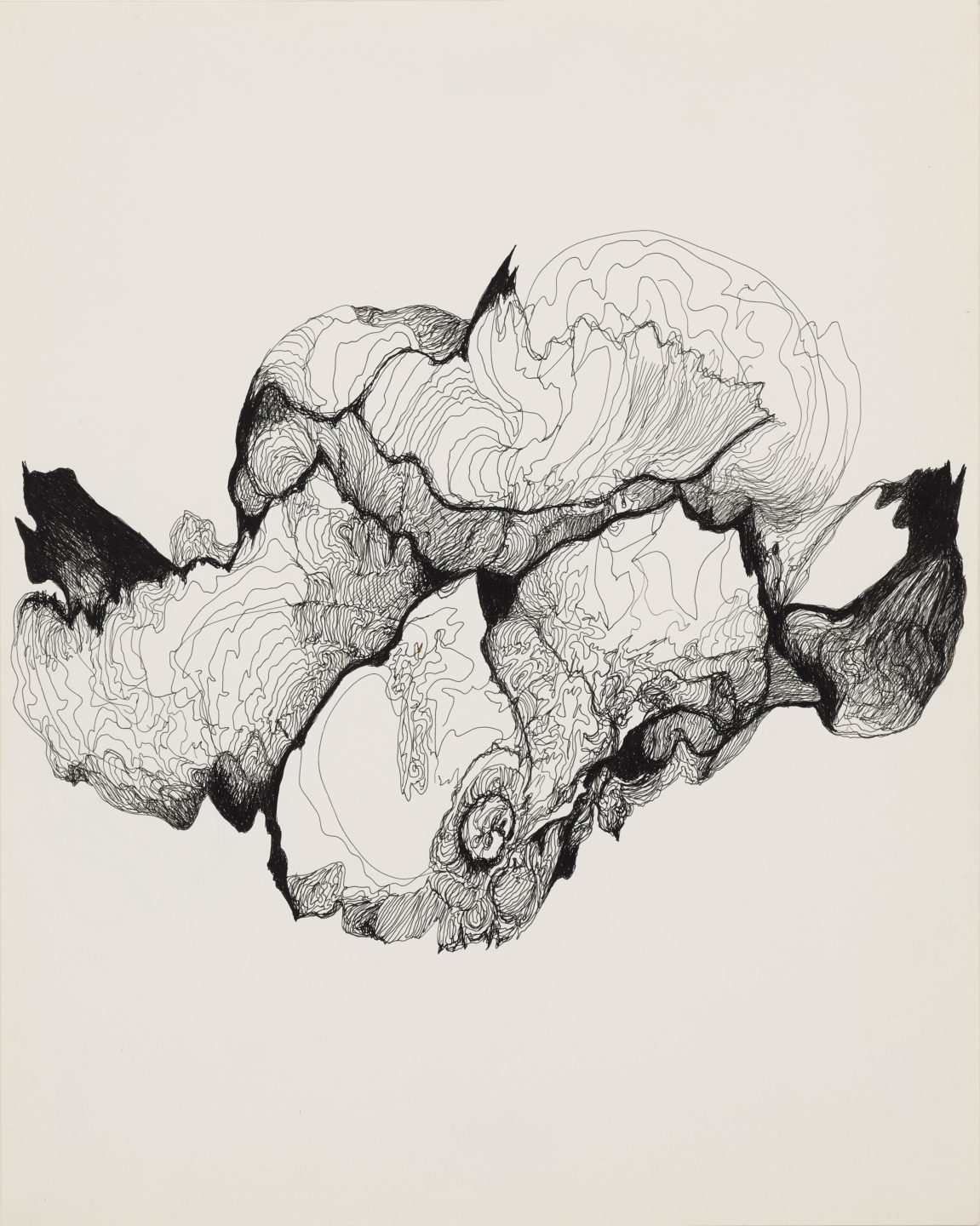 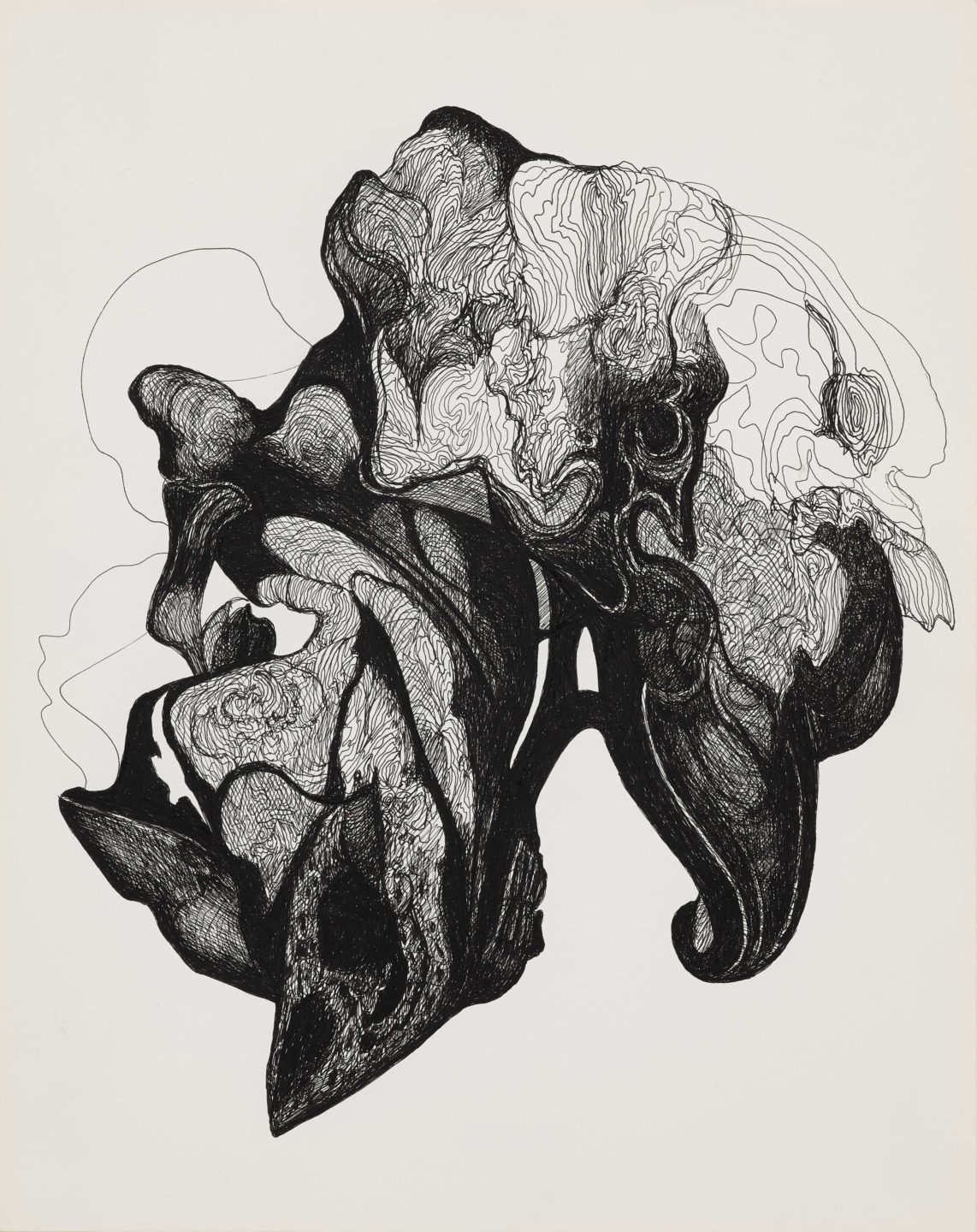 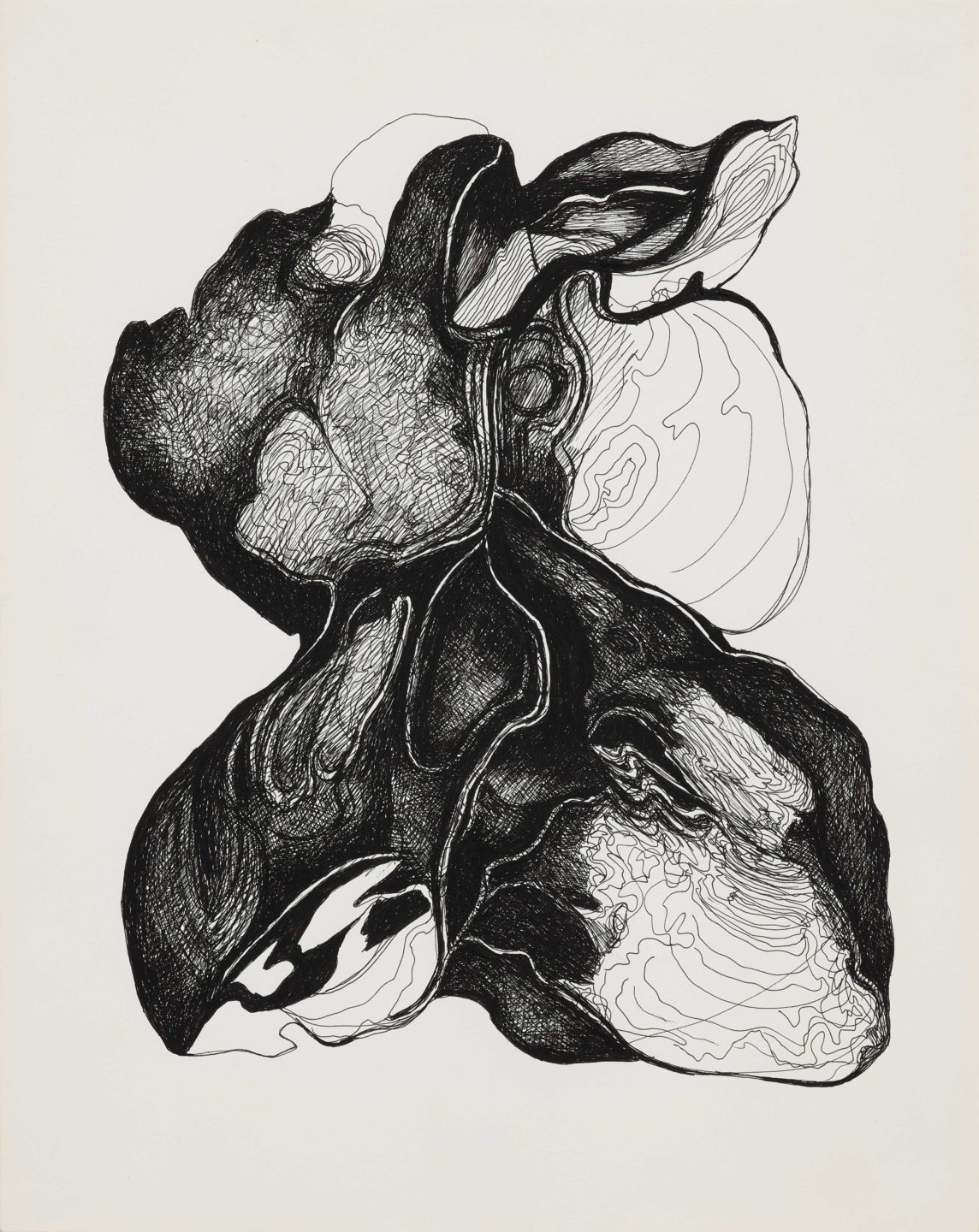 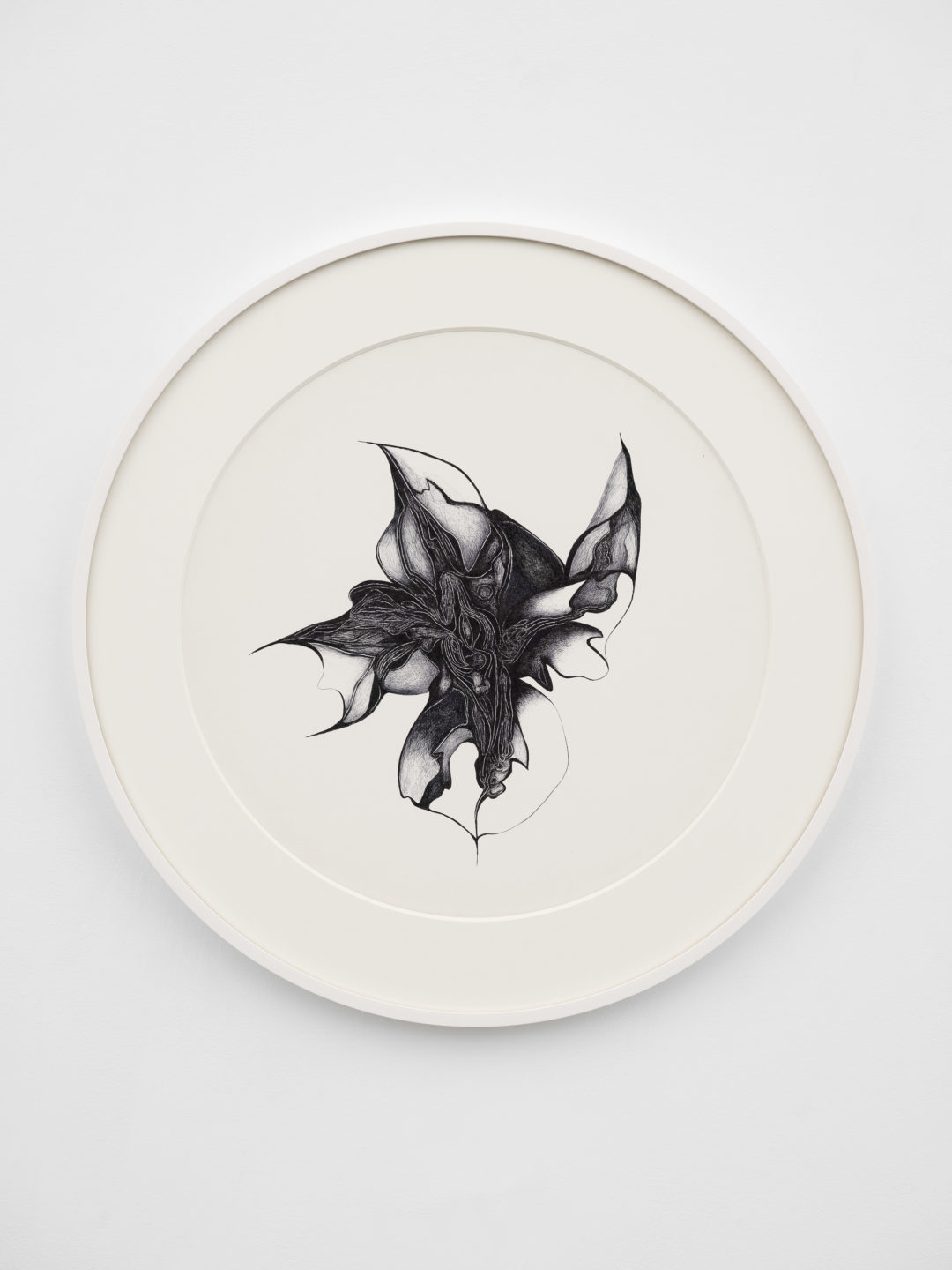 ‘Generated and generative, Sterne’s line departs from the Surrealist conception of automatism to establish a complex dialogue between the corporeal trace and perceptual experience…’

She coaxed out forms suggestive of leaves, tendrils, and petals in Untitled (Baldander), 1970; or chimerical figures with eyes, nostrils, and tongues in Untitled, 1970. Generated and generative, Sterne’s line departs from the Surrealist conception of automatism to establish a complex dialogue between the corporeal trace and perceptual experience, ‘permitting visions that want to take shape to do so’,

Hedda Sterne was born in Bucharest, Romania in 1910. She was a part of the city’s thriving avant-garde community during the interwar period and was mentored by Dada co-founder Marcel Janco and Surrealist Victor Brauner. Between 1927 and 1932 she travelled frequently to Vienna and Paris, where she attended classes in the ateliers of André Lhote and Fernand Léger, and at the Académie de la Grande Chaumière.  She studied art history and philosophy at the University of Bucharest from 1929 to 1932. That year, she married Friederich (Fritz) Stern, and during the following decade continued her artist practice while travelling between Bucharest and Paris. In 1938 she was included in the 11th annual Salon des Surindépendants, where her collages draw the attention of Jean Arp and Peggy Guggenheim.

Returning to her family in Bucharest in the lead up to World War II in 1939, Sterne witnessed the Romanian Iron Guard Revolt and Bucharest Pogrom in 1941. Later that year, she was able to travel to Lisbon and from there to New York, where she joined her husband who had left Romania on a business visa in 1940. Sterne established a studio on East 50th Street in 1942, becoming close friends with her neighbours Peggy Guggenheim and Max Ernst. Through Guggenheim she was introduced to artists including Piet Mondrian, André Breton and Marcel Duchamp. Breton and Duchamp included Sterne in the 1942 exhibition First Papers of Surrealism, Sterne’s first group exhibition in the United States.

In 1943, Peggy Guggenheim began to exhibit Sterne’s work at the Art of This Century gallery. That year, she also met Betty Parsons, who would become her long-time gallerist and close friend, and the artist and fellow Romanian émigré Saul Steinberg, who was commissioned as an ensign in the US Naval Reserve and soon departed on active duty. They corresponded regularly over the following year. In the summer of 1944, Sterne’s divorce from Fritz Stafford was finalised. (Fritz and Hedda had changed their German-sounding surname from Stern to Stafford in 1941, though since she had been building her career with her original married name, she soon began to exhibit her work as Hedda Sterne, a nom de plume through the addition of an ‘e’). She married Steinberg in October 1944. While the pair separated in 1960, they were never divorced.

Sterne’s first solo exhibition in the US took place in 1943, organised by Betty Parsons at the Wakefield Gallery. When Parsons opened her own gallery in 1946, Sterne was one of 16 artists represented by the pioneering gallery at its founding, along with Mark Rothko, Barnett Newman and Ad Reinhardt. In 1950, Sterne was named one of the country’s best artists under the age of 36 by Life magazine and that year was one of 28 artists to sign an open letter to the president of the Metropolitan Museum of Art, protesting the museum’s aesthetically conservative group exhibition juries. Life magazine published an article about the letter in a January 1951 issue. Sterne was among 15 of the signatories photographed by Nina Leen for the article. The image, subtitled ‘Irascible Group of Advanced Artists’, includes, among others, Barnett Newman, Mark Rothko, Jackson Pollock, Clyfford Still, Robert Motherwell, Willem De Kooning, Adolph Gottlieb, Ad Reinhardt. Sterne, the only woman, can be seen standing on a table at the very top. The photograph is one of the defining images of the New York School.

In 1963, awarded a Fulbright fellowship in painting, Sterne lived and work for over a year in Venice, where she developed her Vertical-Horizontals. She began a daily practice of meditation in 1966, which became important for the rest of her life. Sterne continued to make paintings, drawings and prints, exhibiting widely through to the 2000s. She died in New York in 2011 at the age of 100.

Retrospective exhibitions have been mounted at the Montclair Art Museum, New Jersey in 1977 and at the Queens Museum in Flushing Meadow, New York in 1985. Hedda Sterne: Dessins (1939–1998), a retrospective of drawings, was held at Bibliothèque Municipale, Ville de Caen, in 1998. Uninterrupted Flux: Hedda Sterne, A Retrospective was held at the Krannert Art Museum, University of Illinois at Urbana-Champaign in 2006, touring in 2007 to the University of Virginia Art Museum, Charlottesville, Virginia. Sterne’s work has enjoyed increased critical visibility in recent years, featuring in major group exhibitions and museum displays, such as The Form of Freedom: International Abstraction after1945 at Museum Barberini, Potsdam (4 June–25 September 2022); Midcentury Abstraction: A Closer Look at the Yale University Art Gallery (2022); Elles font l’abstraction at Centre Pompidou, Paris (2021); Labyrinth of Forms: Women and Abstraction, 1930-1950 at the Whitney Museum of American Art, NY (2021-22); Affinities for Abstraction: Women Artists on Eastern Long Island, 1950–2020, at Parrish Art Museum, NY (2021); Epic Abstraction: Pollock to Herrera at The Met Fifth Avenue, NY (2018–20); Hedda Sterne: Printed Variations at Amon Carter Museum of American Art, TX (2018-19); Making Space: Women Artists and Postwar Abstraction at MoMA, NY (2017). A solo exhibition was held at Victoria Miro in London in 2020. 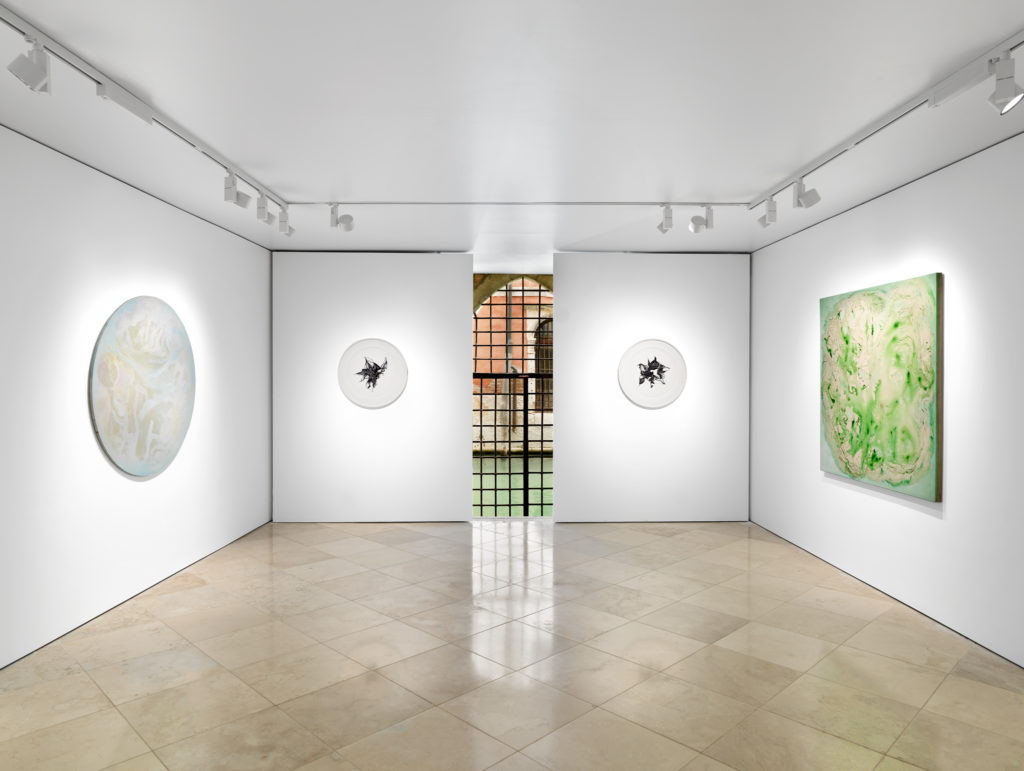 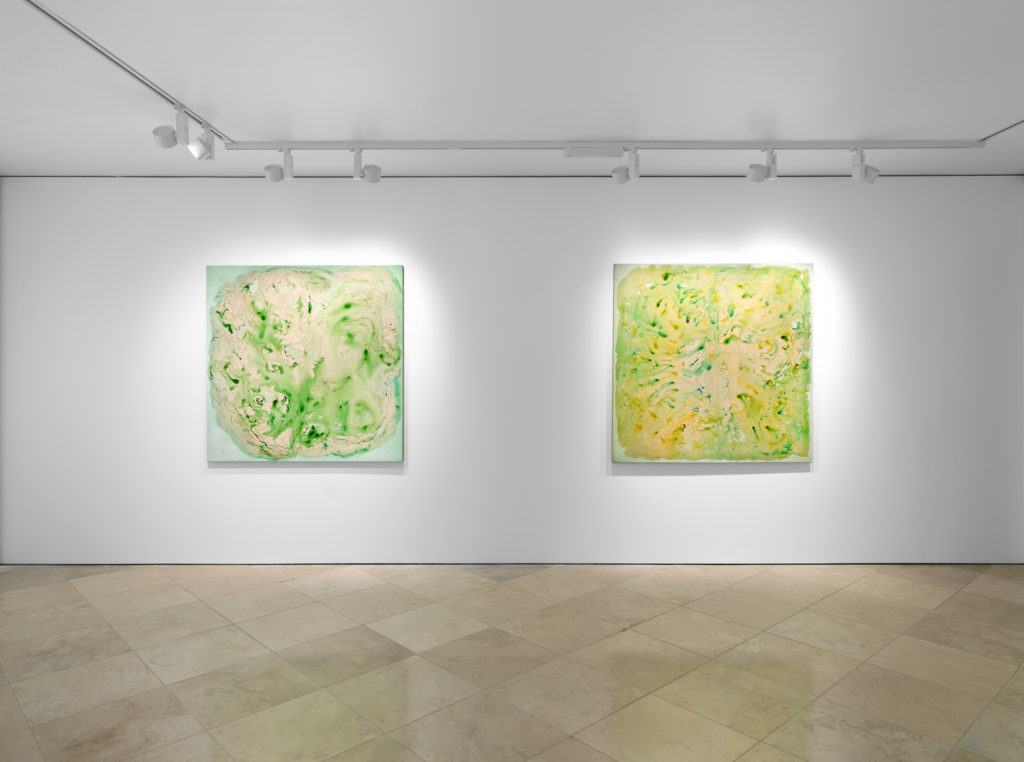 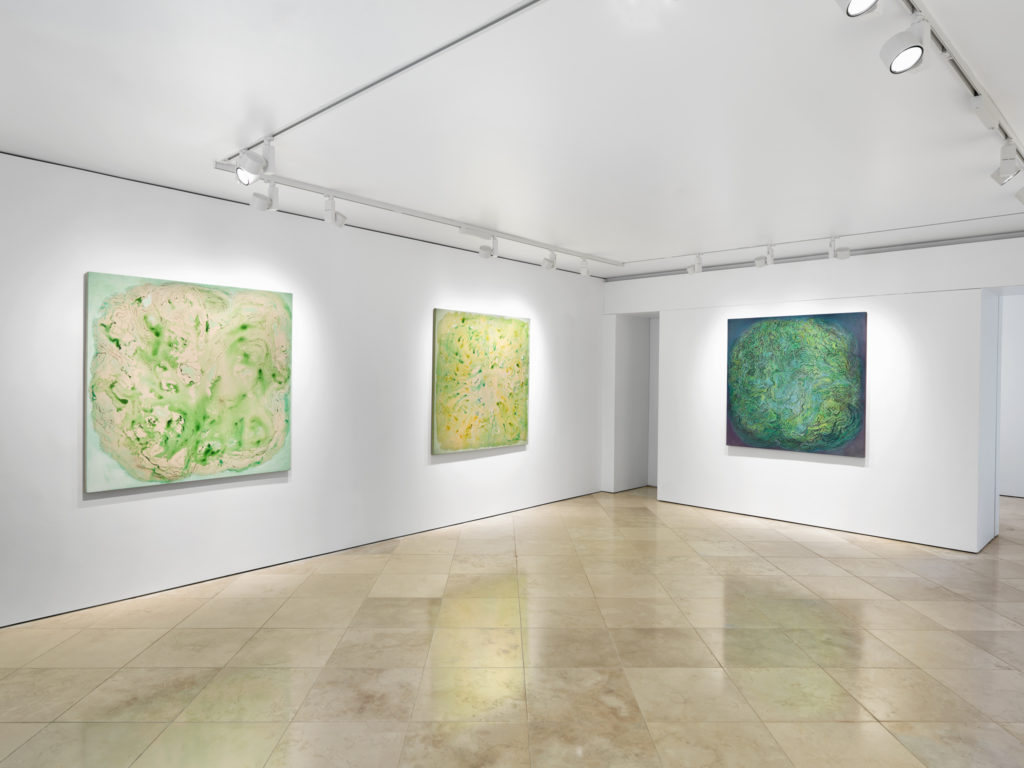 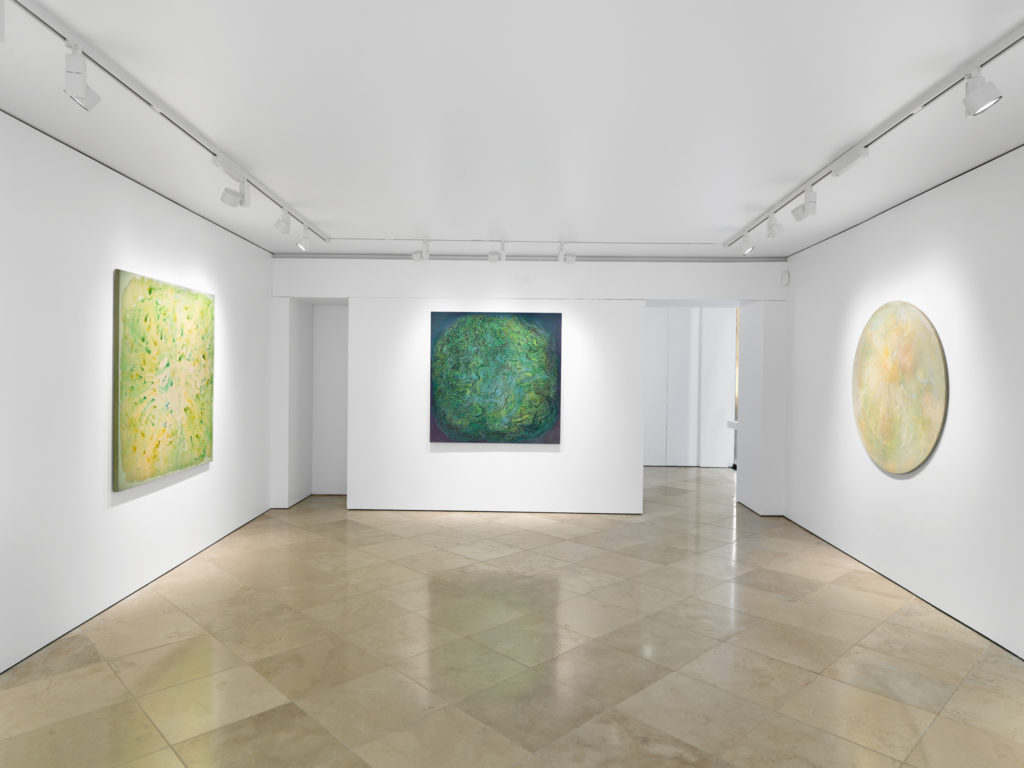 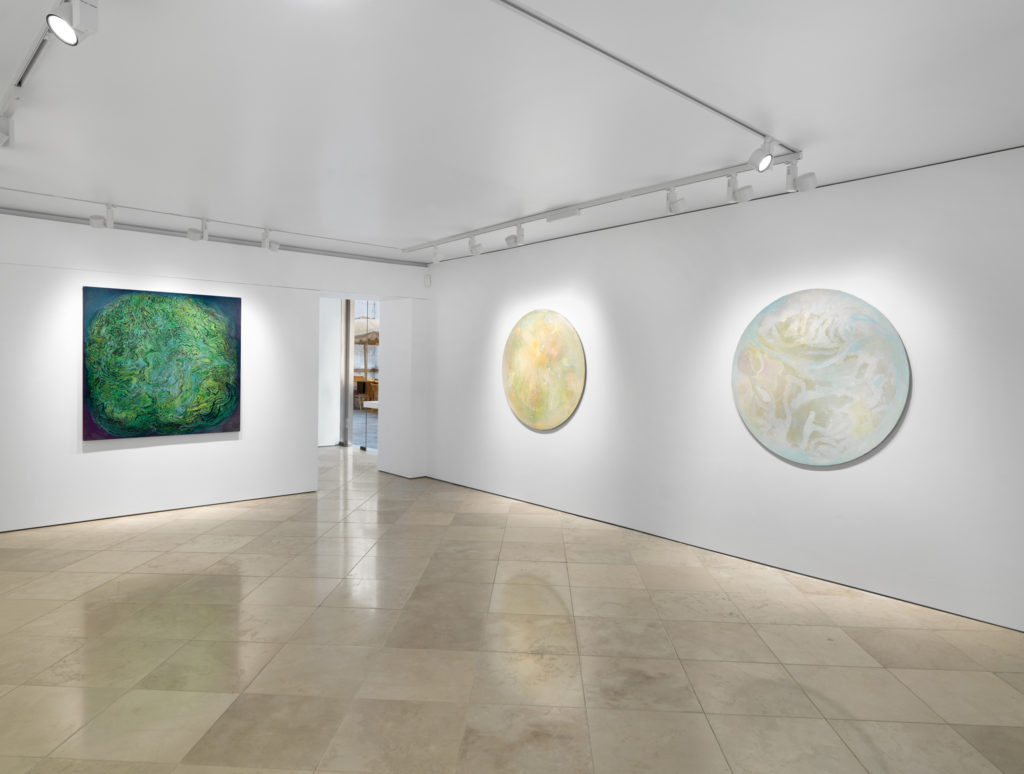 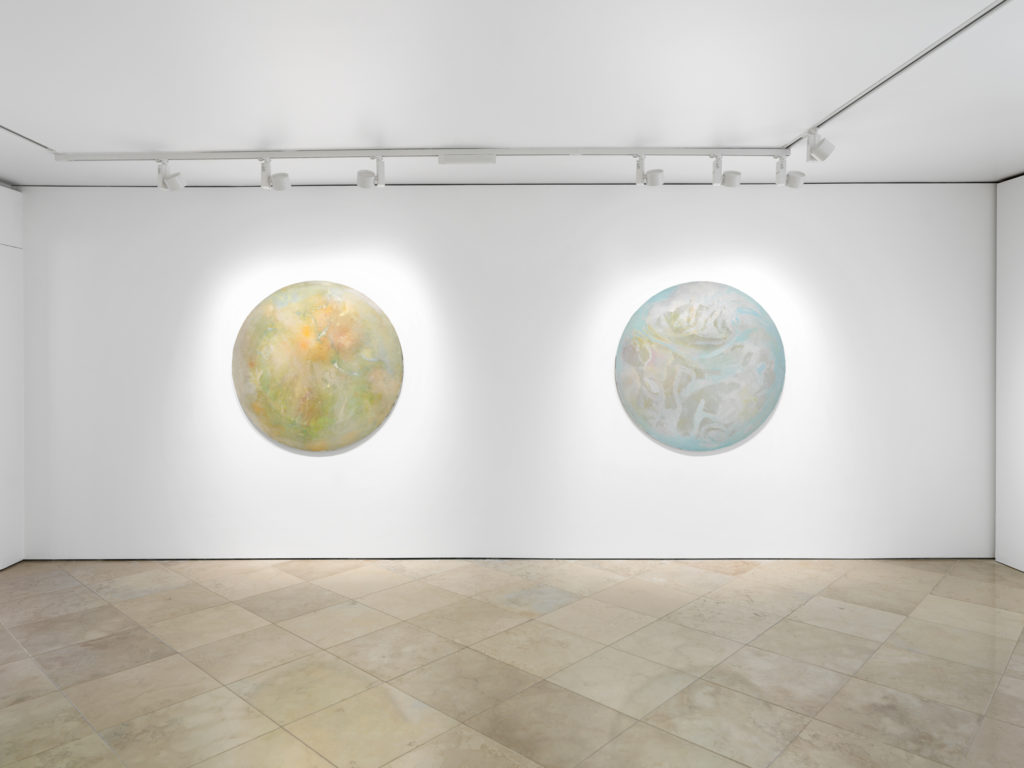 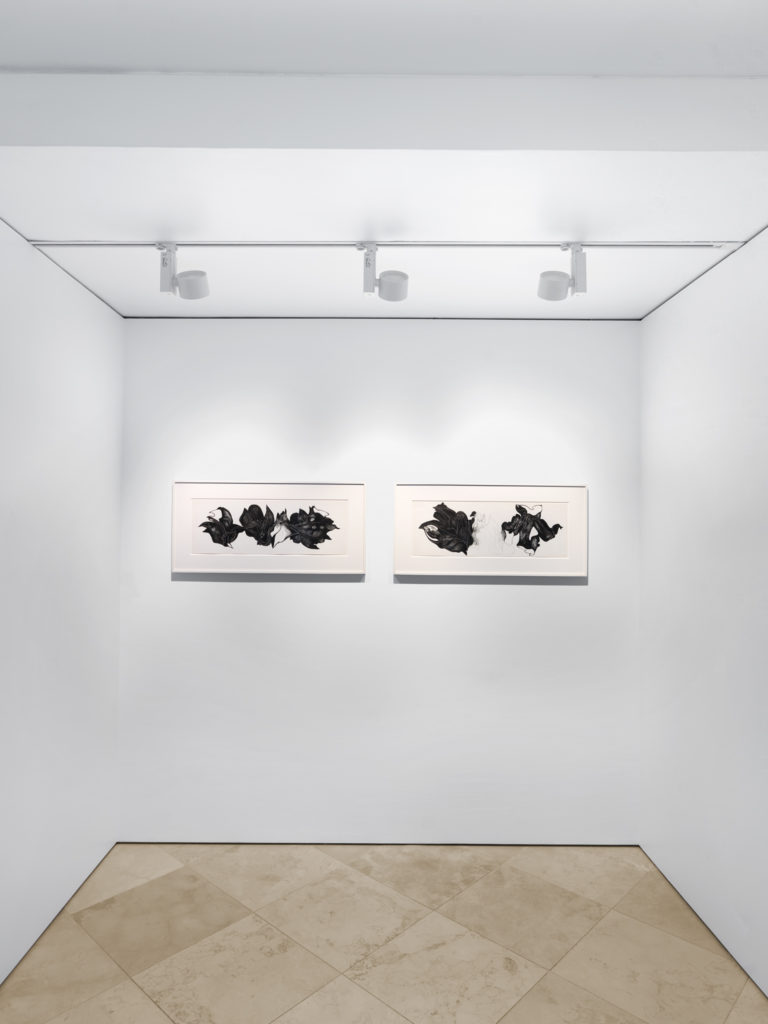