12 September–24 October 2020
Tuesday–Saturday 10am–1pm & 2–6pm
Monday by appointment
No booking is required when visiting the exhibition. We welcome a maximum number of 5 people at a time to our Venice gallery

Victoria Miro welcomes visitors back to its Venice gallery with new paintings by the London-based artist Flora Yukhnovich.

In 2019, Victoria Miro established a studio space in Venice for invited artists to spend extended time in the historic city and make new bodies of work. During a two-month residency, Flora Yukhnovich used the opportunity to engage more fully with Venetian culture. Her sources include the music of Vivaldi and the memoirs of Casanova, in addition to one of her key influences, Giovanni Battista Tiepolo, whose works including ceiling frescoes in the Ca’ Rezzonico museum and the Chiesa Santa Maria della Visitazione she was able to study first hand.

Titled Barcarole after the traditional folk songs sung by Venetian gondoliers, this exhibition, which includes new paintings completed recently in London, reflects further on these influences, in particular the frescoes of Tiepolo and the notions of pace, movement and musicality that arise visually from the orchestration of brushmark, line and colour.

Flora Yukhnovich: Barcarole is also available to view via the App Store on Vortic Collect.

‘I made this work using different speeds of touch and movement to capture a musical feeling and the rich spirit of Venetian Rococo.’— Flora Yukhnovich

Since completing her masters degree in 2017, Yukhnovich has received acclaim for paintings in which she adopts the language of Rococo, reimagining the dynamism of works by eighteenth-century artists such as Giovanni Battista Tiepolo, François Boucher, Nicolas Lancret and Jean-Antoine Watteau through a filter of contemporary cultural references including film, food and consumerism.

A shift in emphasis from predominantly French to Italian influences has, for the artist, resulted in a number of developments and breakthroughs. While Yukhnovich has long been entranced by the idea of the fête galante – a type of painting depicting the wealthy at amorous play in parkland settings that came to prominence with Watteau – Tiepolo’s ceiling paintings have encouraged a more heavenwards focus, bringing with it a change in palette towards celestial blues and pinks and compositions that defy a gravitational pull. Brush marks, freed from describing flesh, become looser, lighter, functioning as directional cues to the viewer.

Of special interest to the artist while she was in Venice was Tiepolo’s fresco  The Coronation of the Virgin, commissioned in 1754 for the newly constructed church of Santa Maria della Visitazione, known as La Pietà, which inspired her to work on an oval canvas for the first time. Antonio Vivaldi, who was born close by, taught violin at the adjacent Foundling Hospital for many years and, while the church itself was rebuilt in a neoclassical style shortly after Vivaldi’s death, it is still referred to as the ‘Vivaldi Church’. For Yukhnovich, the idea of Vivaldi and Tiepolo working roughly contemporaneously has led to additional consideration of her paintings’ rhythmic sensuality. 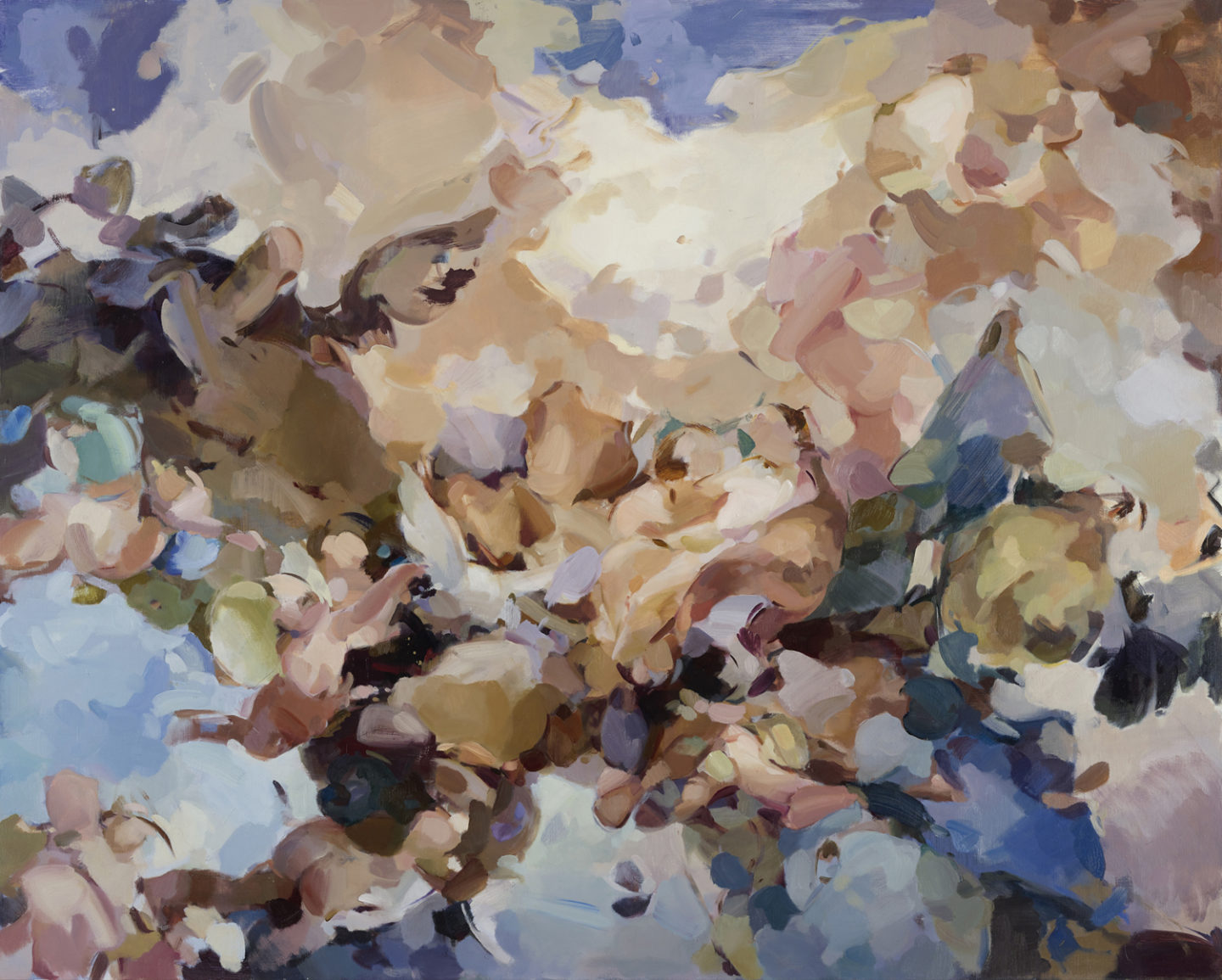 ‘These new paintings are really a continuation of the works I began in Venice. However, making them back in the UK and a while after the residency led to some interesting differences.’— Flora Yukhnovich

New paintings completed recently in London are a continuation of the themes and discoveries that preoccupied the artist during her residency. Each is based on a detail of a fresco by Tiepolo, in Venice as well as other cities. For the artist, working from reproductions provided a shift in focus and intensity – of colour palette especially. She explains, ‘With these, I brought colour back with quite a lot of intensity. I think reproductions idealise the colours to some degree and I have exaggerated it further. These works are about departing from the figurative source and arriving at a more gestural, abstract new place, where marks and colour can stand in for the attitude of the original painting but with more ambiguity and maybe more openness. I made studies first and then worked from the study as much as possible to get more separation from the figuration and focus on the paint and mark making. I think they still retain a sense of illusionary space and some of the feeling of the escapism that Tiepolo’s work has.’ 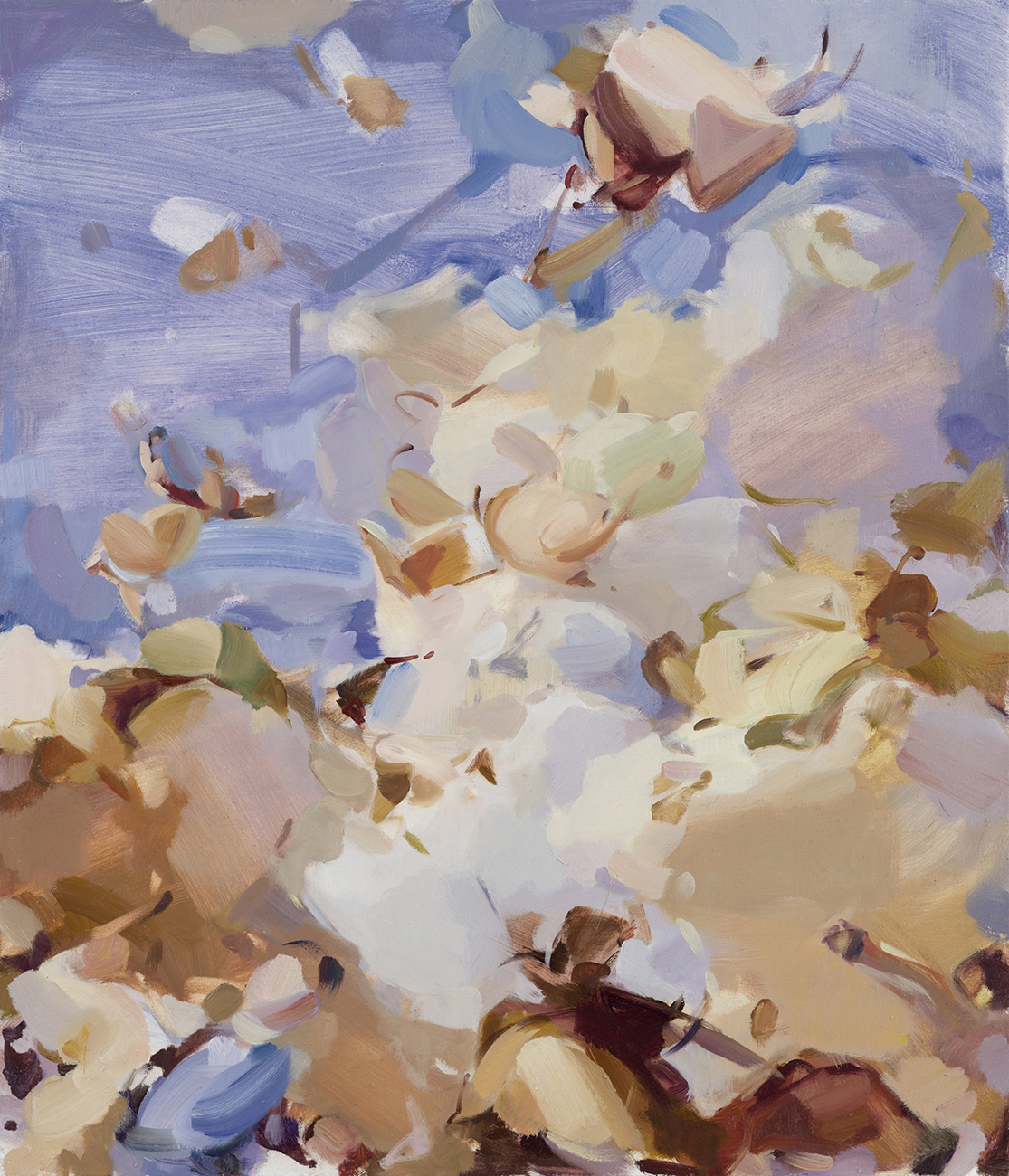 ‘The sense of escape and being transported is a prevalent Rococo theme… It felt like a very appealing facet to explore during lockdown.’— Flora Yukhnovich

‘When I was in Venice I felt that there was something almost mythical or other-worldly about it – it seems to me to be as much an escapist ideal as it is a real place. I think that’s part of its romantic appeal. That thought was at the front of my mind while leafing through my books and scrolling through Google images during lockdown, trying imagine myself back in those spaces. It feels especially apparent in these paintings, because of the heightened colours but I think they also seem more wistful, as for me, Venice began to feel like a far-off romantic ideal. The sense of escape and being transported is a prevalent Rococo theme, often revolving around islands, not as real locations but as other places full of possibility and free from the confines of everyday life. That felt like a very appealing facet to explore during lockdown.’ 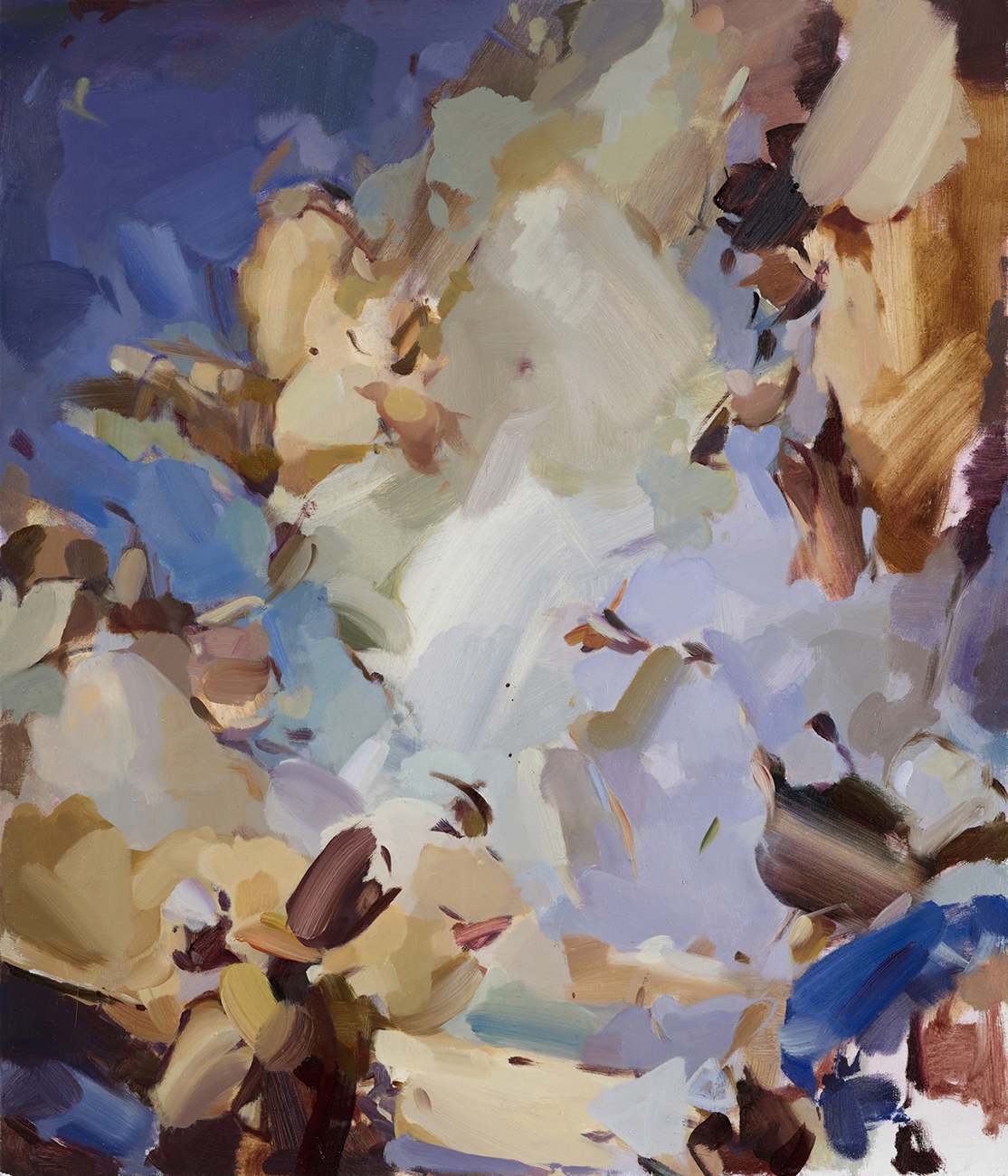 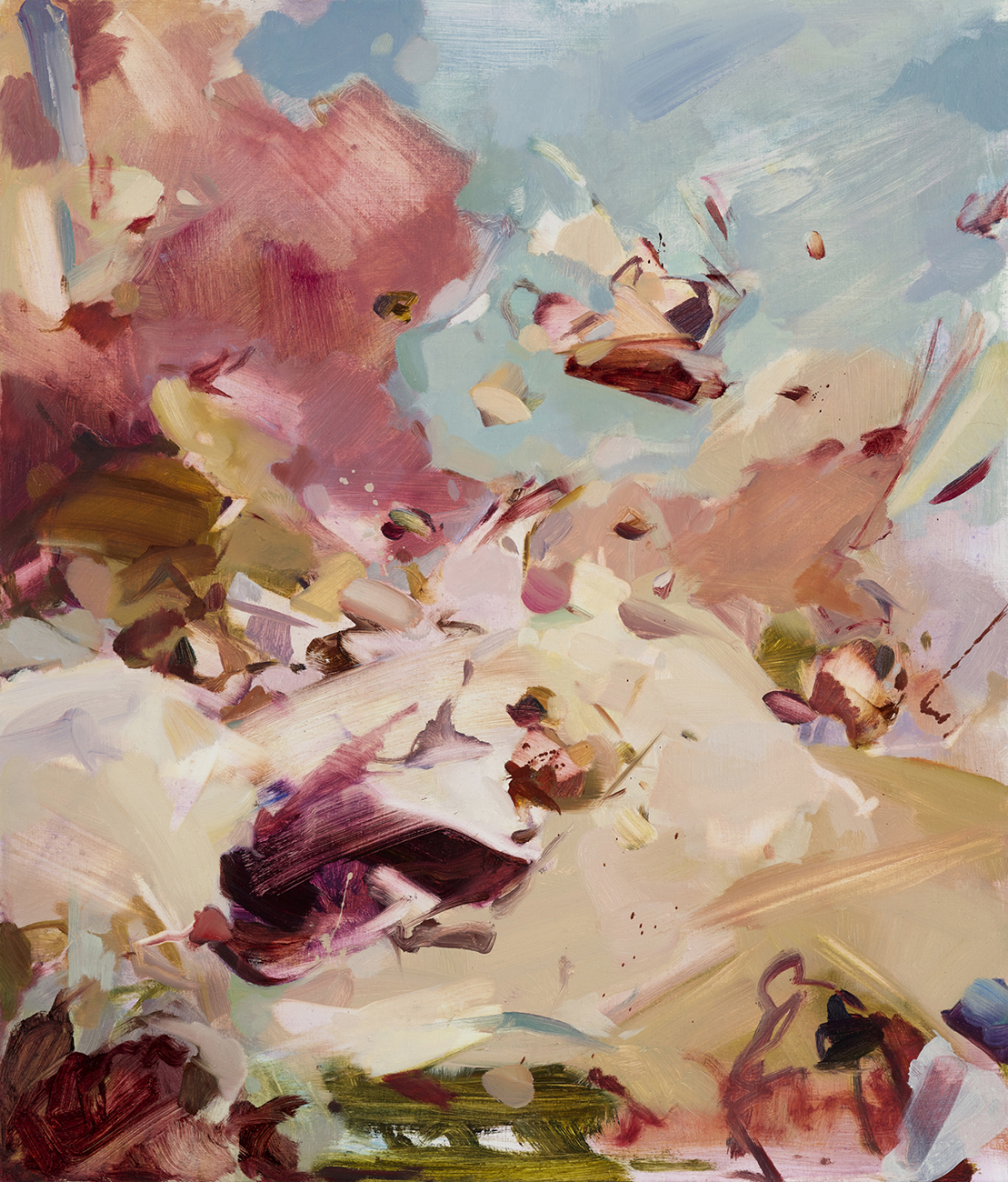 ‘These smaller works are titled after musical directions rather than types of musical pieces. They are closer cropped, so I thought it made sense not to title them with something so complete.’— Flora Yukhnovich

‘In music Pizzicato is when the musician plucks at the strings, which felt appropriately bouncy. I liked the sense of the eye jumping across space. It’s also a type of Italian dance. Calando means getting quieter or falling away. The colours are deeper in this work. I think it feels more subdued than the others. Dolce – I’ve wanted to use this title for ages. It means “sweetly” in music and the purples and pinks in this painting felt right. I thought it was nice to have something coming back to the idea of sweetness, which I’m often looking at in my work. Pontecello is something Vivaldi used. It’s when the bow on a stringed instrument is placed very close to the bridge and it splits the note. My painting feels like there is bowing motion because of the transparency of some of the marks. I also like that it’s a pun on “bridge”, which I thought was a nice nod to Venice.’ 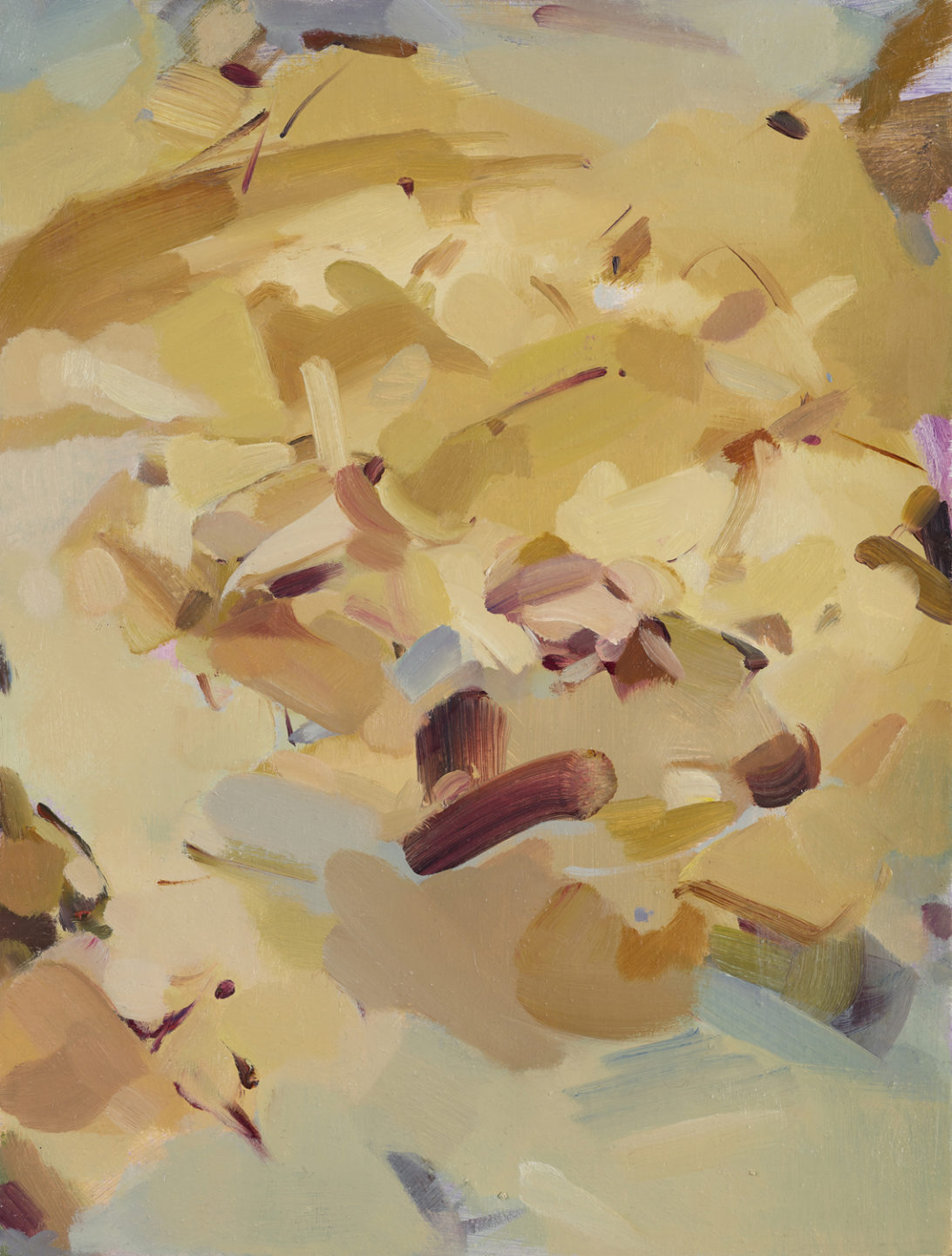 ‘With these two works, I reduced the palette to concentrate on the relationship between line and curve in Tiepolo’s work, trying to understand some underlying code to the way he structures things.’— Flora Yukhnovich

‘These two small paintings are a pared-back look at two details of Tiepolo’s Transportation of the Holy House of Loreto, 1743, a very beautiful painting on canvas in the Accademia. With these works, I reduced the palette to concentrate on the relationship between line and curve in Tiepolo’s work, trying to understand some underlying code to the way he structures things.’ 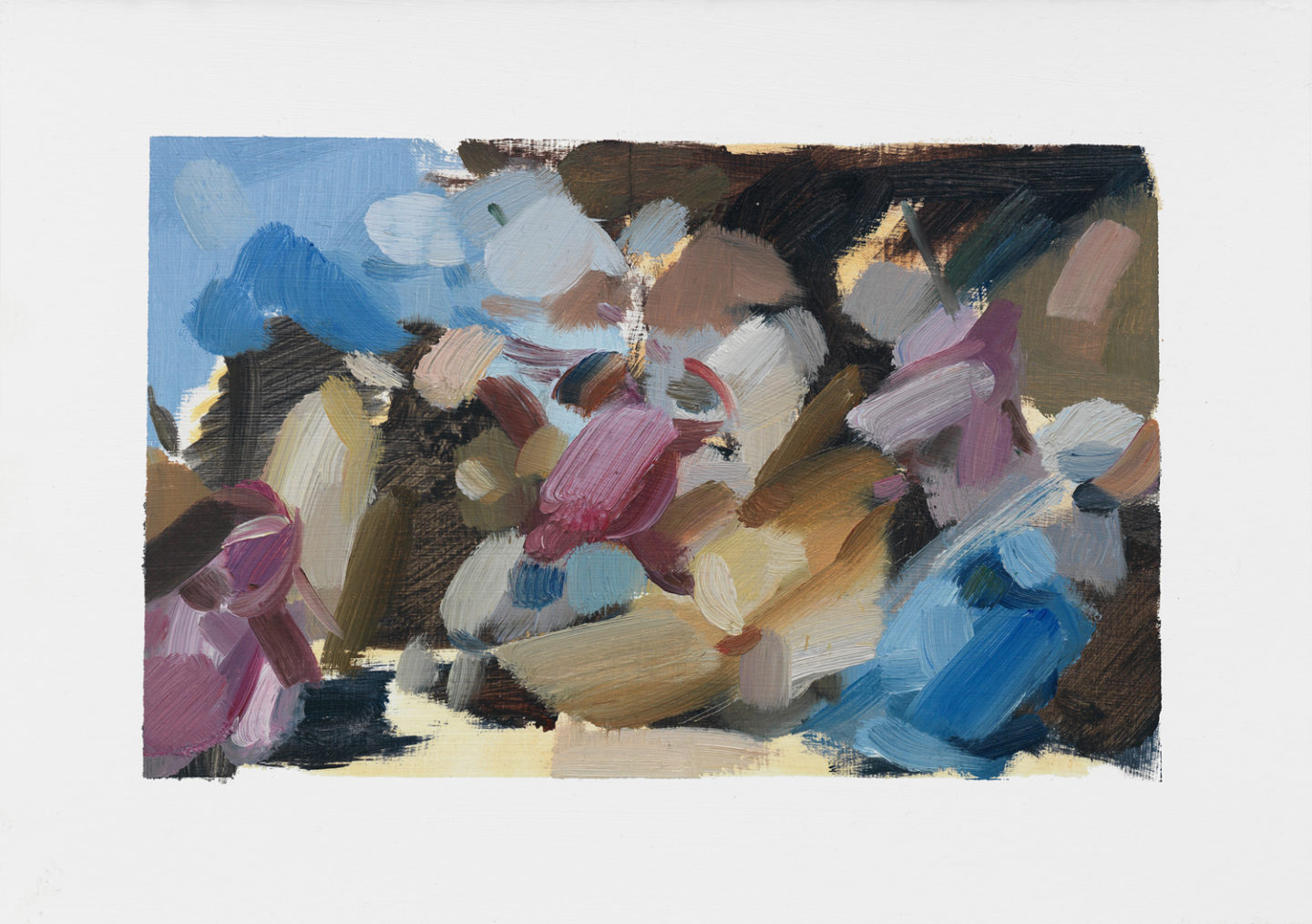 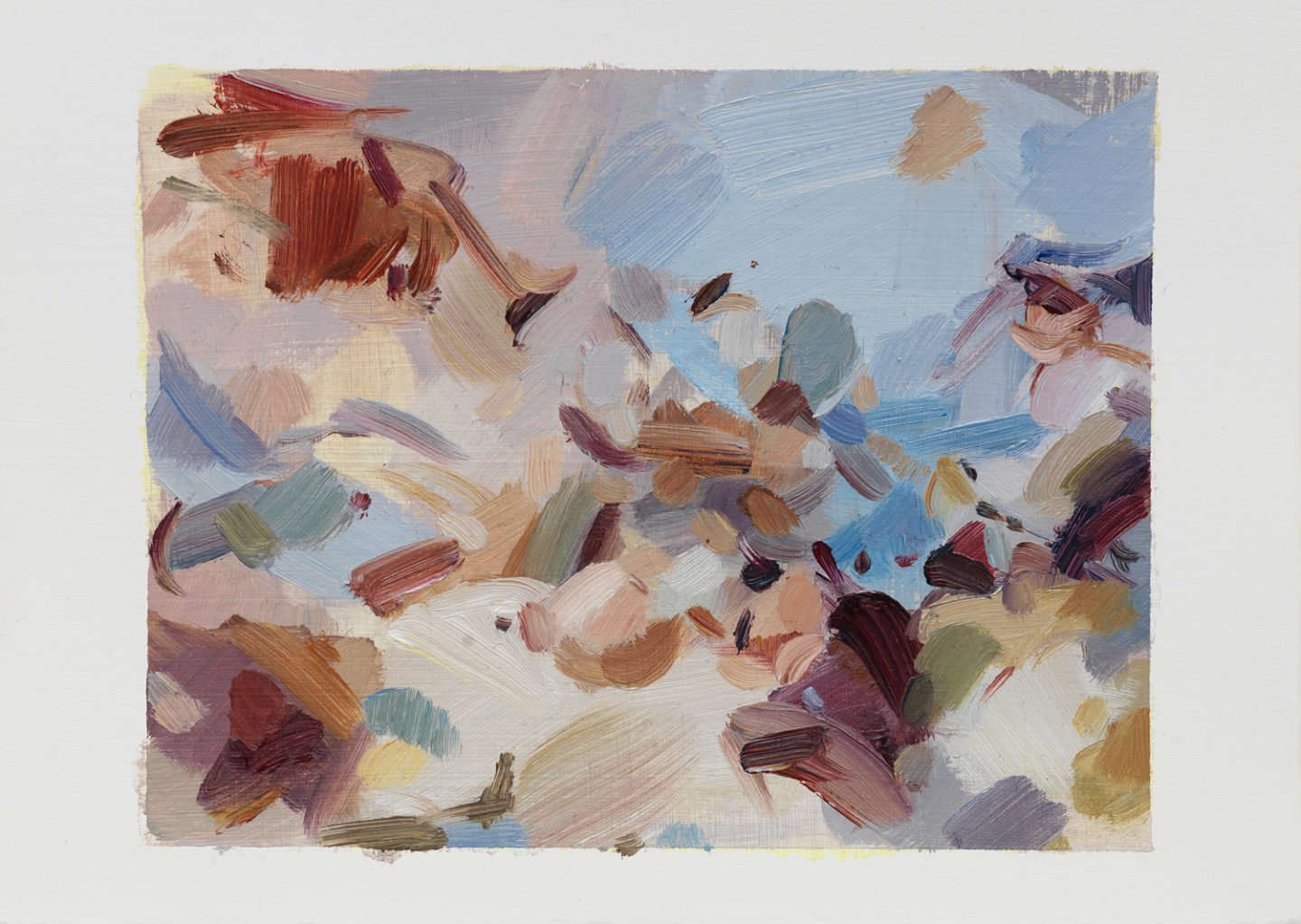 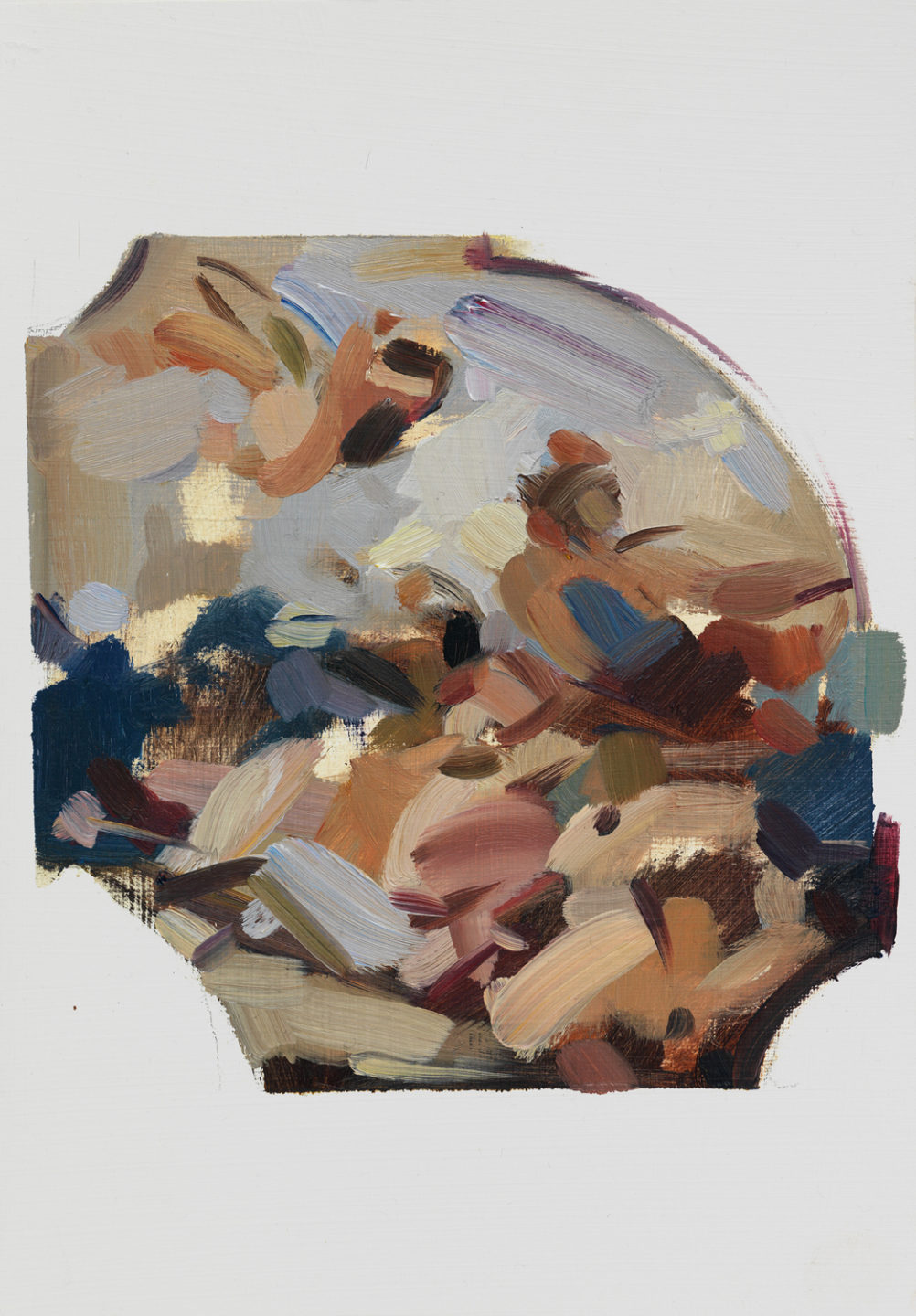 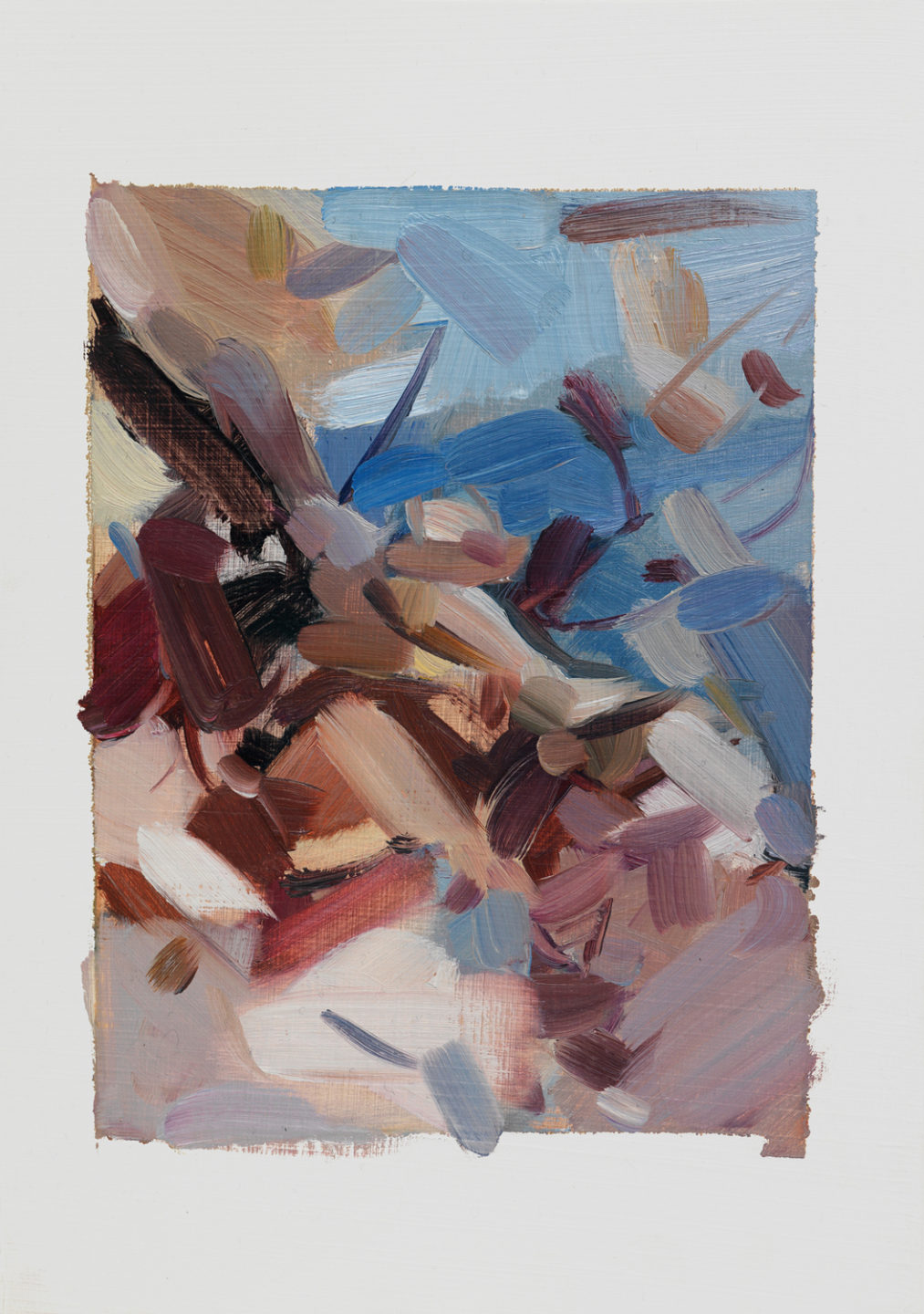 ‘I love paint. I think it’s delicious. I find it the most thrilling, exciting stuff. I like the idea of it being excessive and luxuriating in it. And I hope that comes through in my work.’ — Flora Yukhnovich

Born in 1990, Flora Yukhnovich completed her MA at the City & Guilds of London Art School in 2017. She has received great acclaim for paintings in which she adopts the language of Rococo, reimagining the dynamism of works by eighteenth-century artists such as Tiepolo, François Boucher, Nicolas Lancret and Jean-Antoine Watteau through a filter of contemporary cultural references including film, food and consumerism.  She had her first solo exhibition at Parafin, London, in March 2019, and has recently exhibited at GASK, the Gallery of the Central Bohemian Region, Czech Republic, the Jerwood Gallery Hastings and at Blenheim Walk Gallery, Leeds Arts University, UK. Collections include Government Art Collection and David Roberts Art Collection. In 2018 she completed The Great Women Artists Residency at Palazzo Monti, Brescia.