Victoria Miro is delighted to participate in FIAC (booth C11) with a two-person presentation of works by Paula Rego and Chantal Joffe.

Storytelling lies at the heart of this special presentation, with a particular focus on the roles and relationships between mothers and daughters. Paula Rego’s Little Red Riding Hood series is a characteristically spirited retelling of the fairytale, reintroducing the mother as a central figure who enacts revenge on the wolf. In Chantal Joffe’s Pictures of What I Did Not See, the narrative unfolds over several days in which the artist fell ill and traumatically lost recollection of events. In these raw, urgent works it is the artist’s daughter, Esme, who takes on the role of carer, watching over her ailing mother. 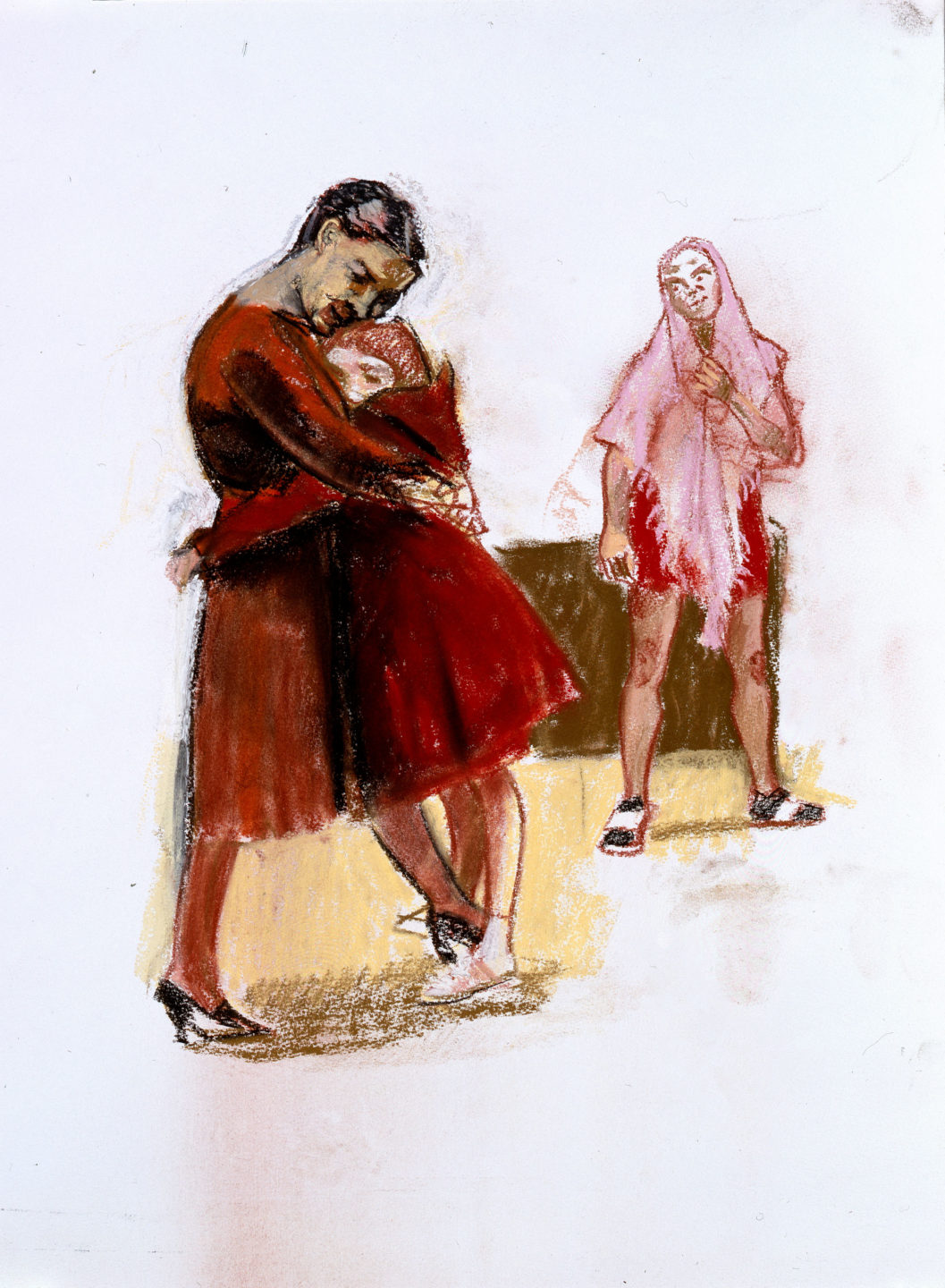 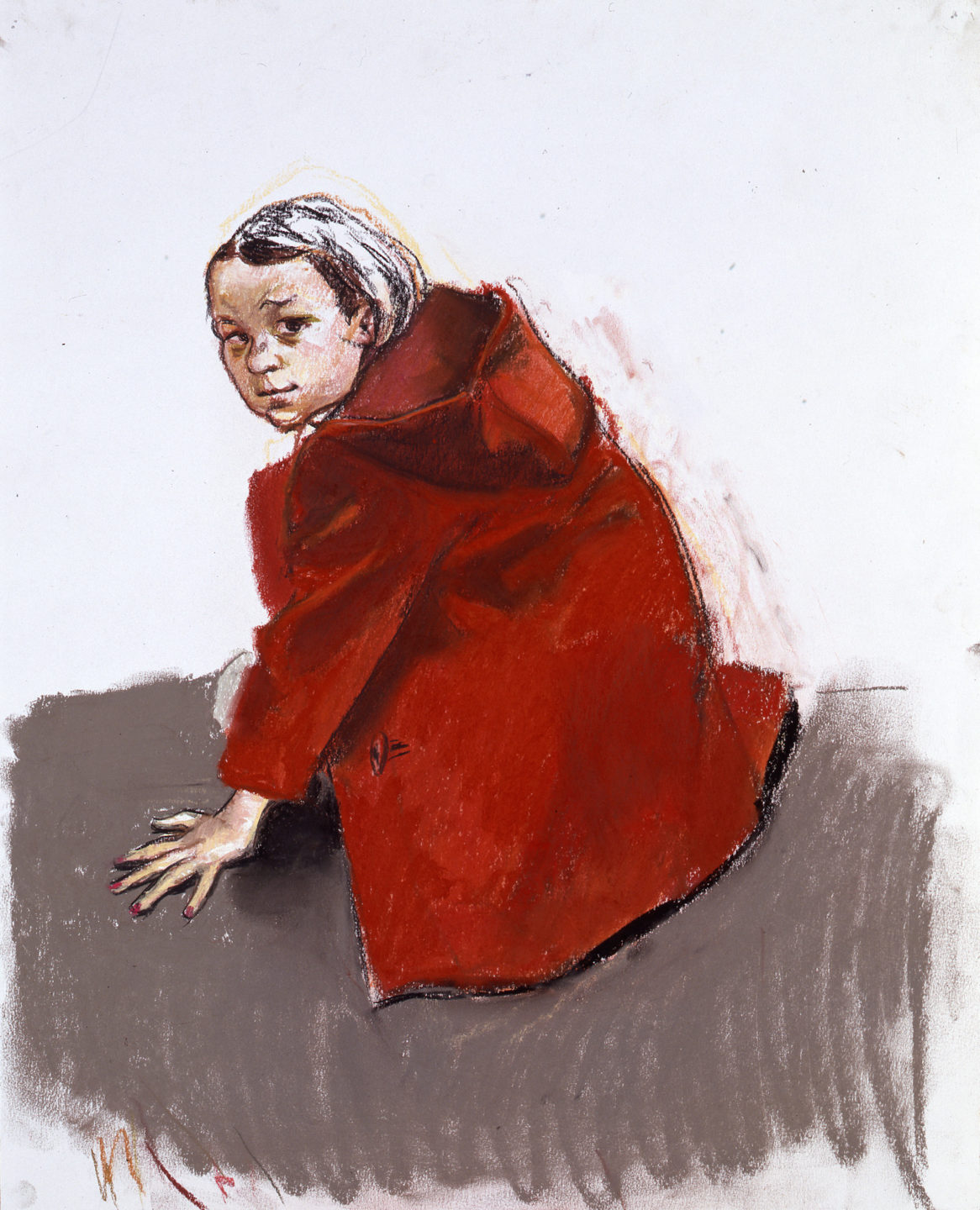 ‘The tale of Red Riding Hood again provides fertile territory for Rego: animals behave like humans; costumes claim symbolic significance; female sexuality is framed as trangressive within a familial context; and we witness the devouring of something “other”.’ — Deryn Rees Jones

A suite of six works completed in pastel, Paula Rego’s Little Red Riding Hood, begins with the girl saying goodbye to her mother and heading into the forest, but quickly diverts from the traditional narrative. The character of the wolf sports outlandish gym gear. Riding Hood herself is revealed to express deep scepticism about their meeting.

The series is based on Charles Perrault’s version of the fairy tale, Le Petit Chaperon Rouge – in which the girl and the grandmother are devoured by the wolf – rather than the more famous Brothers Grimm version in which they survive after being rescued by a male protagonist. Rego reintroduces the girl’s mother, showing her prodding the sated wolf’s distended belly with a pitchfork and, having enacted her revenge, sporting a fur stole.

Writing in the Thames & Hudson monograph Paula Rego: The Art of Story, Deryn Rees Jones notes that ‘like many feminists before her, Rego is interested in the ancient and transformative power of fairytales to foreground instabilities between adults’ and children’s experience and knowledge. Rego’s desire to play with the gaps between our interpretations of ambiguous actions, and the narratives on which they seemingly depend, sees her drawn to the fairytale as a kind of ingrained history that is both shared and personal.’ It is an interest, Rees Jones notes, that can be traced to Jorge Luis Borges and runs parallel with Angela Carter: ‘Like Carter, Rego is interested in the dangerous, violent aspects of female sexuality, and its potential to disrupt binary power relations.’ 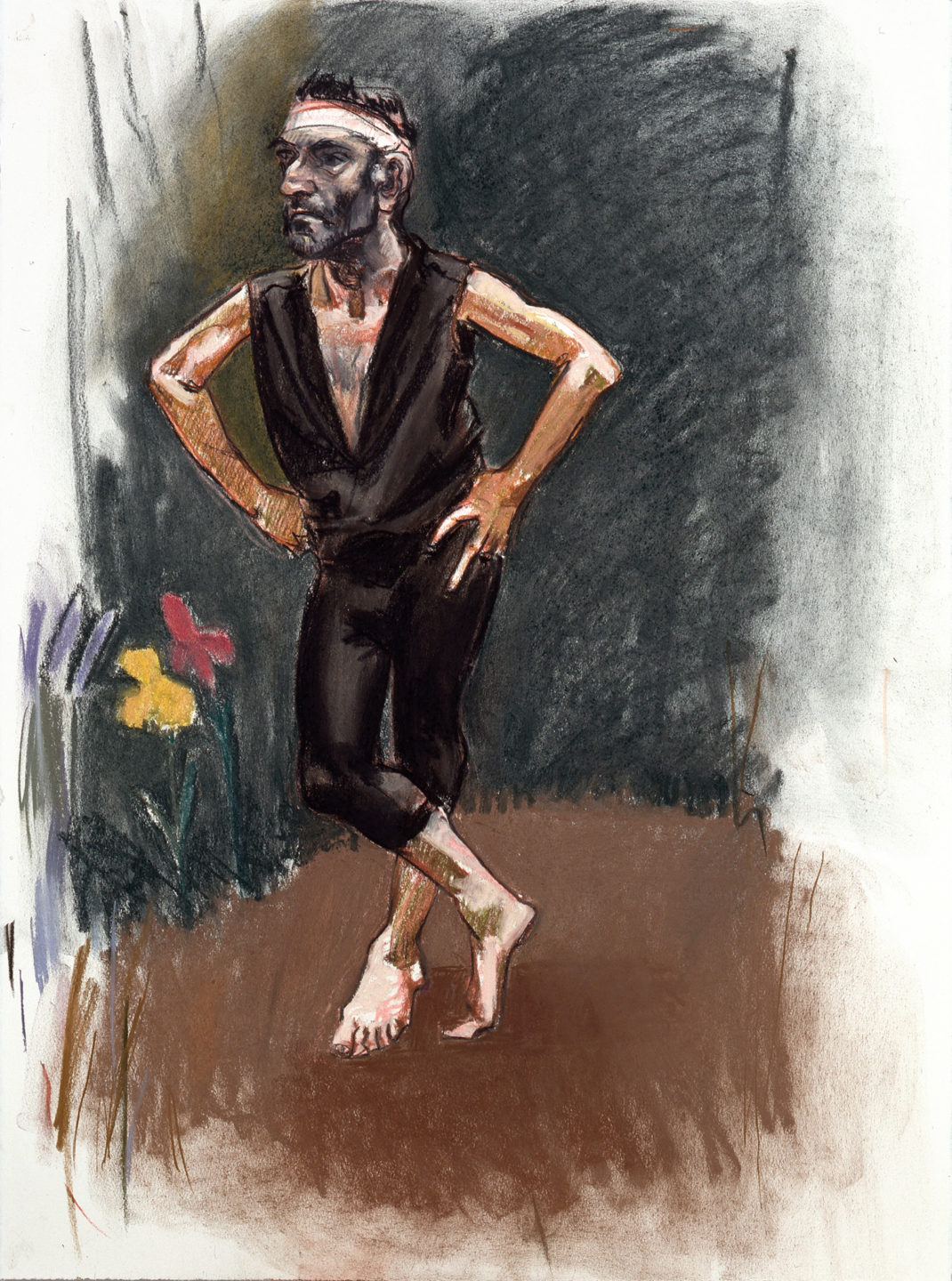 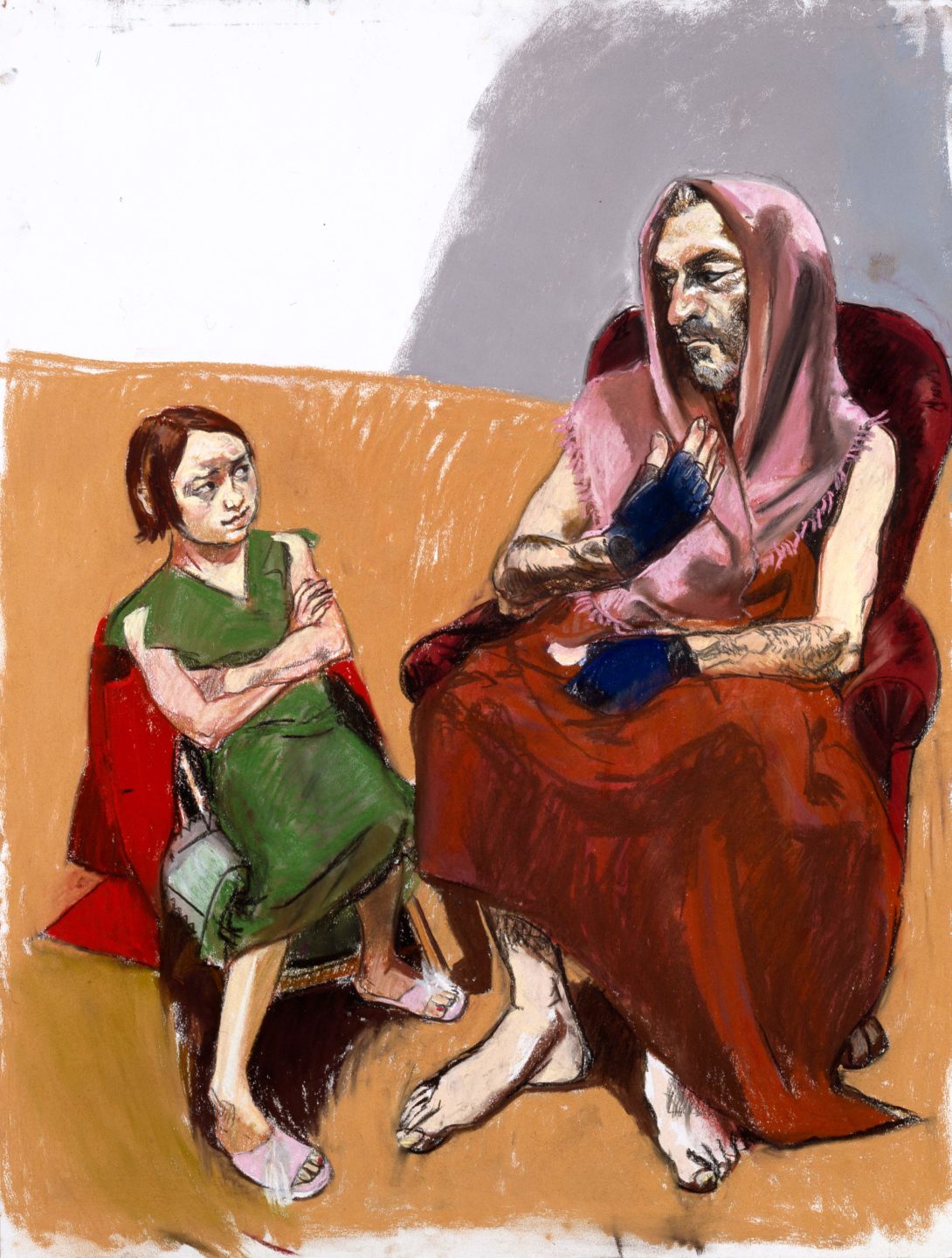 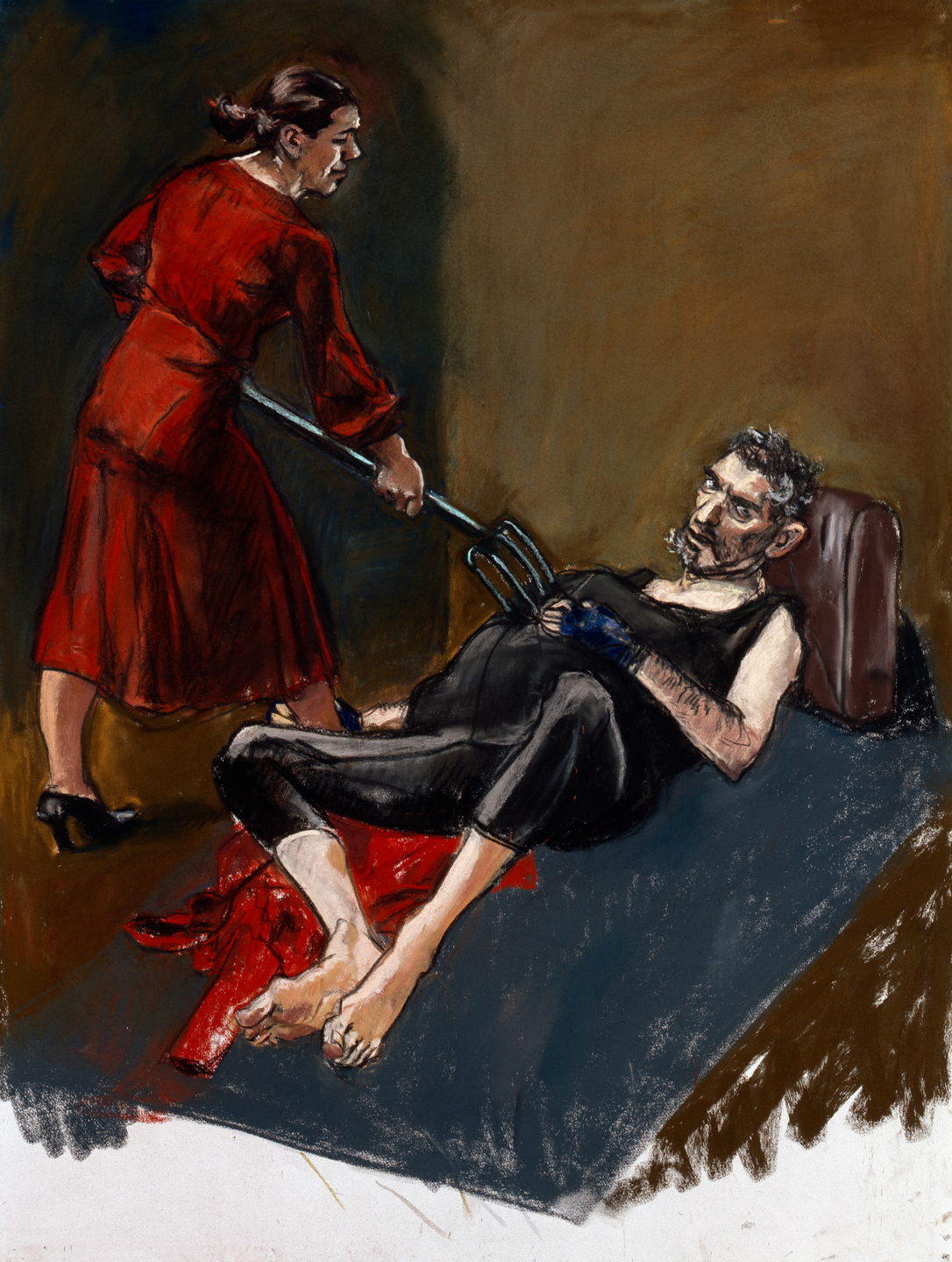 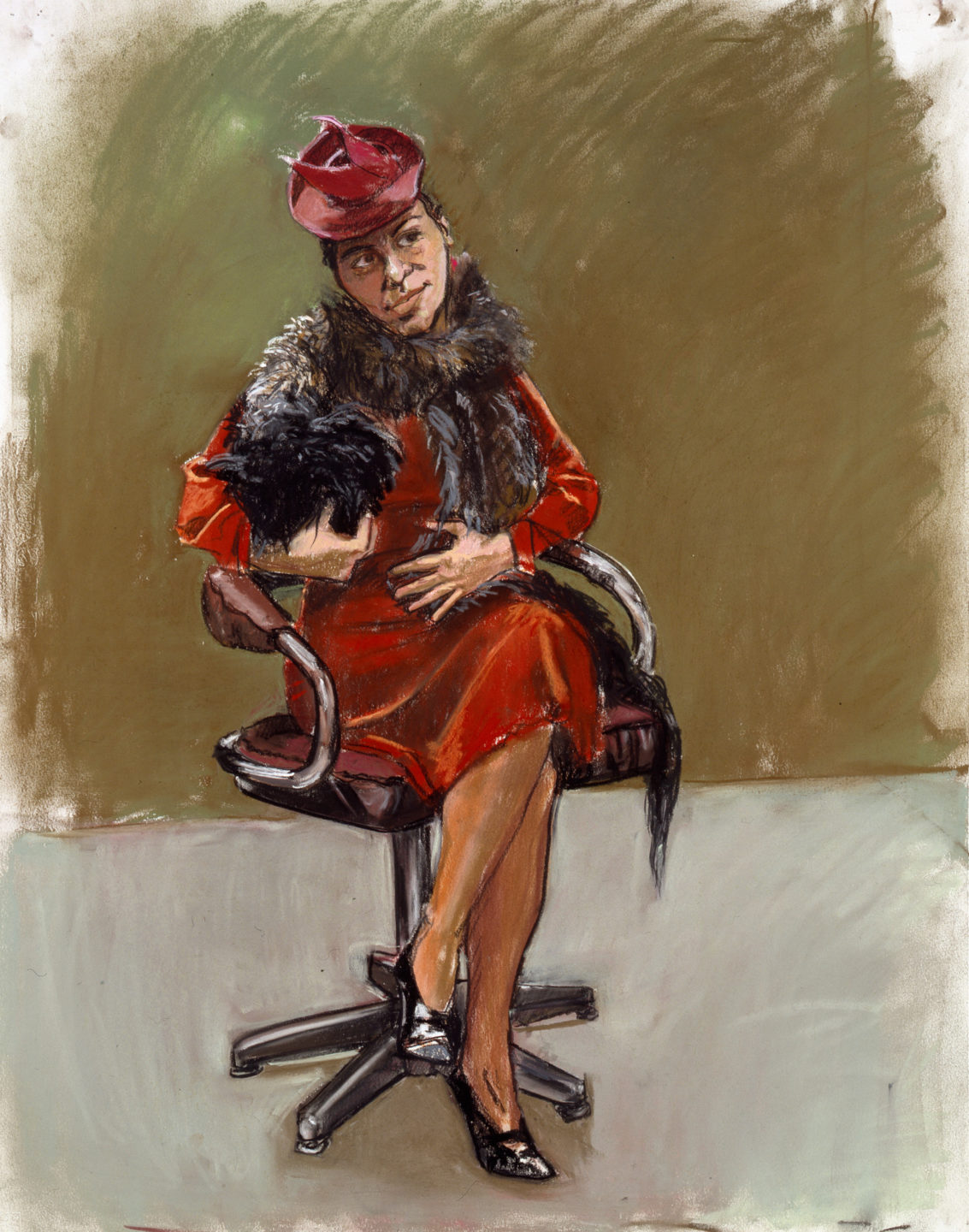 Paula Rego – Get Out of Here You and Your Filth 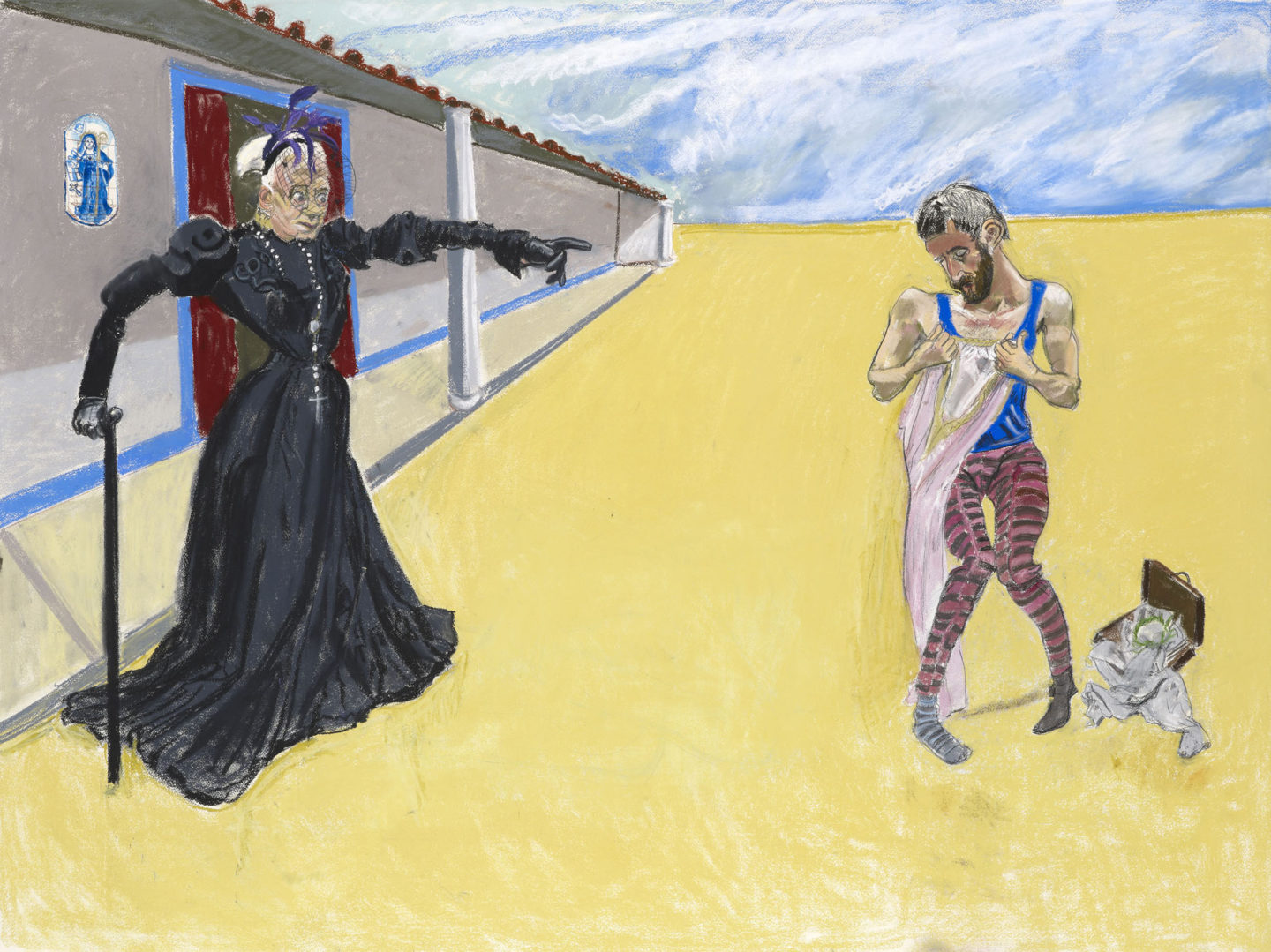 Like many key works from the period, Get Out of Here You and Your Filth, 2013, is inspired by Portugal, Rego’s birthplace, and encompasses Portuguese themes. These works borrow in particular from the great nineteenth-century novelist Eça de Queirós and Get Out of Here You and Your Filth is one of a number inspired by his 1887 novel The Relic. De Queirós’ story, a satire of religion and greed in equal measure, tells the tale of dissolute anti-hero Teodorico who, desperate to inherit his pious aunt’s riches, feigns her obsessive faith and travels to the Holy Land on a pilgrimage in search of a relic to restore her health and prove his devotion. A farce-like scene ensues, in which, instead of the intended gift for his aunt, a negligee is accidentally presented. This work leaves us in doubt about her reaction.

Chantal Joffe – Pictures of What I Did Not See 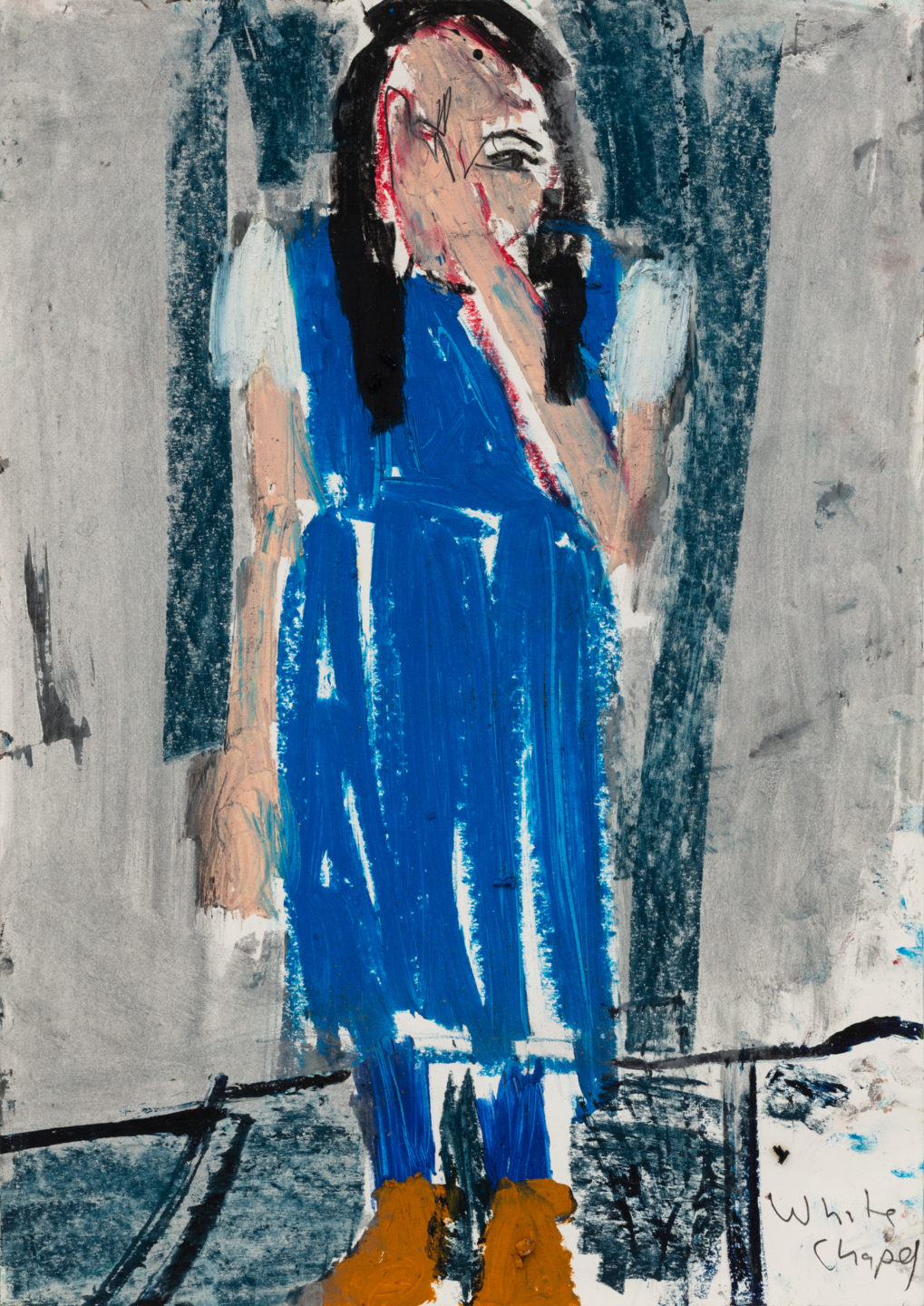 ‘I made these drawings after suffering a concussion… I thought if I drew it, I could cope with it better.’ — Chantal Joffe

Chantal Joffe’s Pictures of What I Did Not See is a series of ten works, presented together, detailing a period in which the artist fell ill and traumatically lost recollection of events. Speaking about these works, Joffe says, ‘I made these drawings after suffering a concussion, to try and understand what had happened while I was unconscious. I thought if I drew it, I could cope with it better. They are rough and ugly and I made them in kind of frenzy, in oil sticks and pencil and pastel, drawing fast and hard. But they felt very necessary to make – imagining how I had looked curled up on my own doorstep, or with my daughter watching over me afterwards – they felt as truthful as I could make them, and the making of them did help me.’

A selection was shown as part of the artist’s 2020 Arnolfini exhibition For Esme – with Love and Squalor. Reviewing the exhibition, Hettie Judah commented, ‘These are dark works, and intense. The scrabbling clottedness of Joffe’s drawing feels like an exorcism, as if she is willing her memory to yield details of what it keeps hidden. For a devoted mother, it must have been terrifying to suddenly become incapable… Here, beloved daughter cares for helpless mother: no longer looked at but looking after.’ 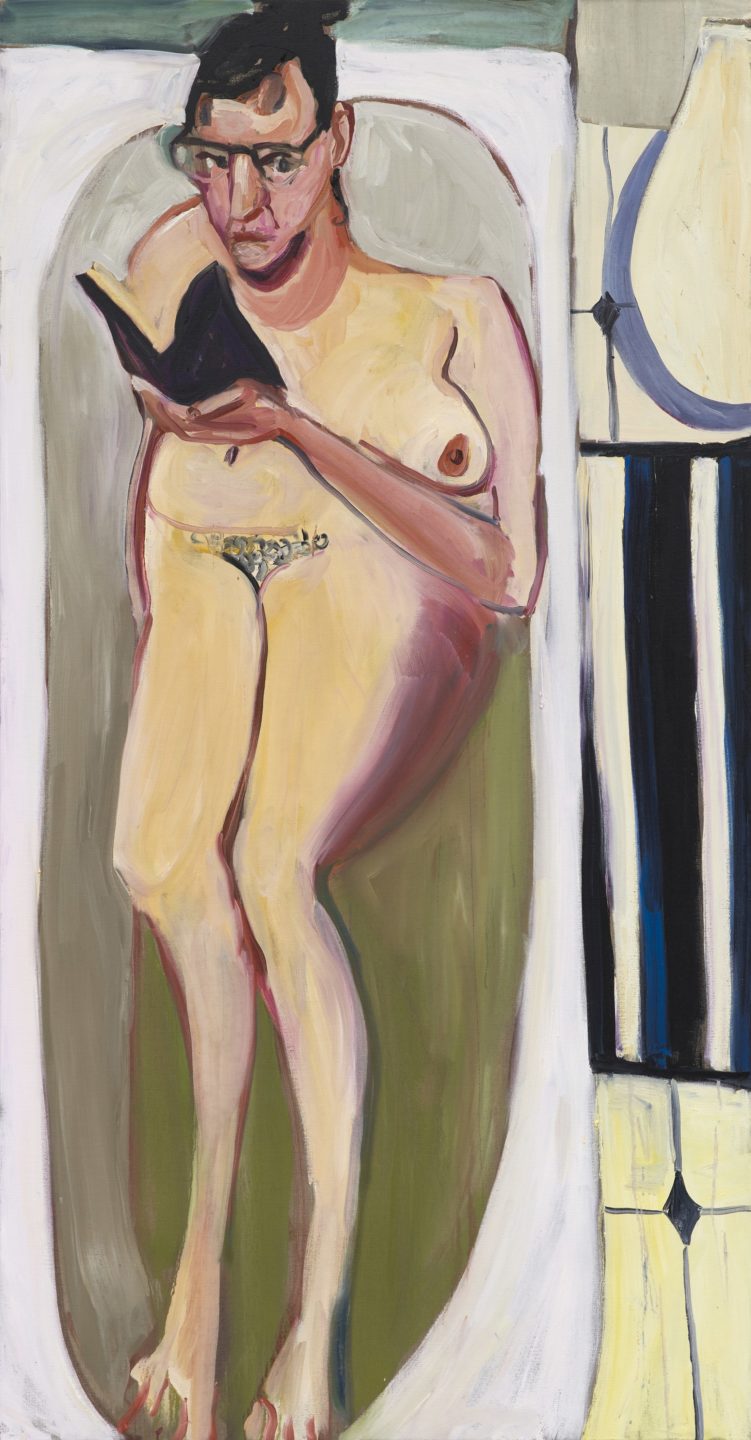 The presentation features a number of new and recent paintings by Joffe. Reading in the Bath III, 2019, introduces new subject matter to Joffe’s art and is, in part, a re-envisioning of Pierre Bonnard’s many paintings of his wife, Marthe, reclining in the bath. Writing in the catalogue for Joffe’s 2020 Arnolfini exhibition For Esme – with Love and Squalor, Dorothy Price considers these new works to be a continuation of ‘Joffe’s complex homage to French modernism.’ Price continues, ‘Joffe’s genius is to flip Marthe’s bath around and re-insert herself into the frame instead, right way up and fully frontal to the picture plane… Whereas Marthe is only signified by her motionless, hairless, alabaster body, Joffe confronts us head on… palpably alive, engaging her brain whilst reading (or trying to)… No-one disturbs her complete self-absorption. Our presence, our gaze, our look, our obsessions have all become irrelevant in Joffe’s powerful reworking of Bonnard…’ 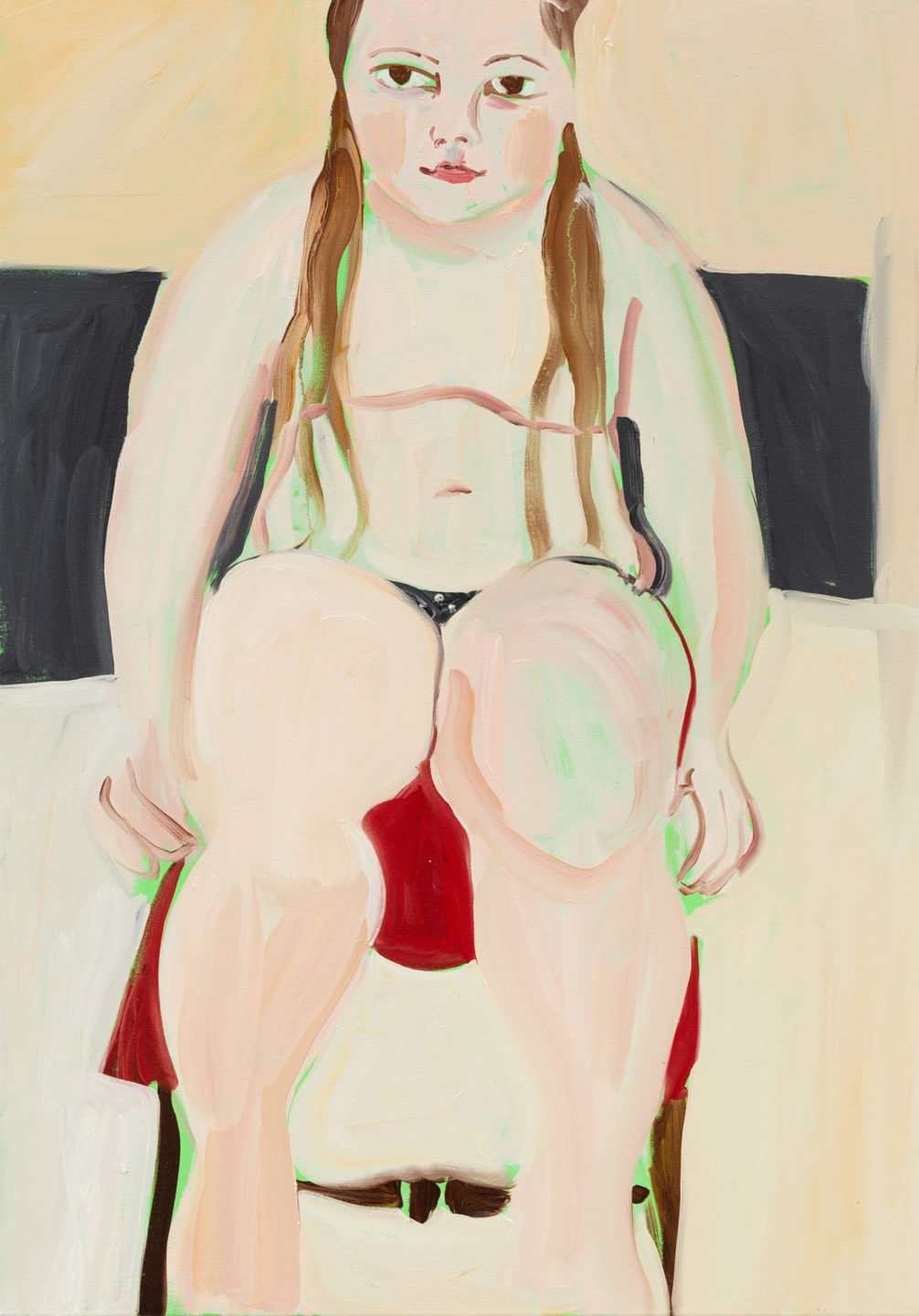 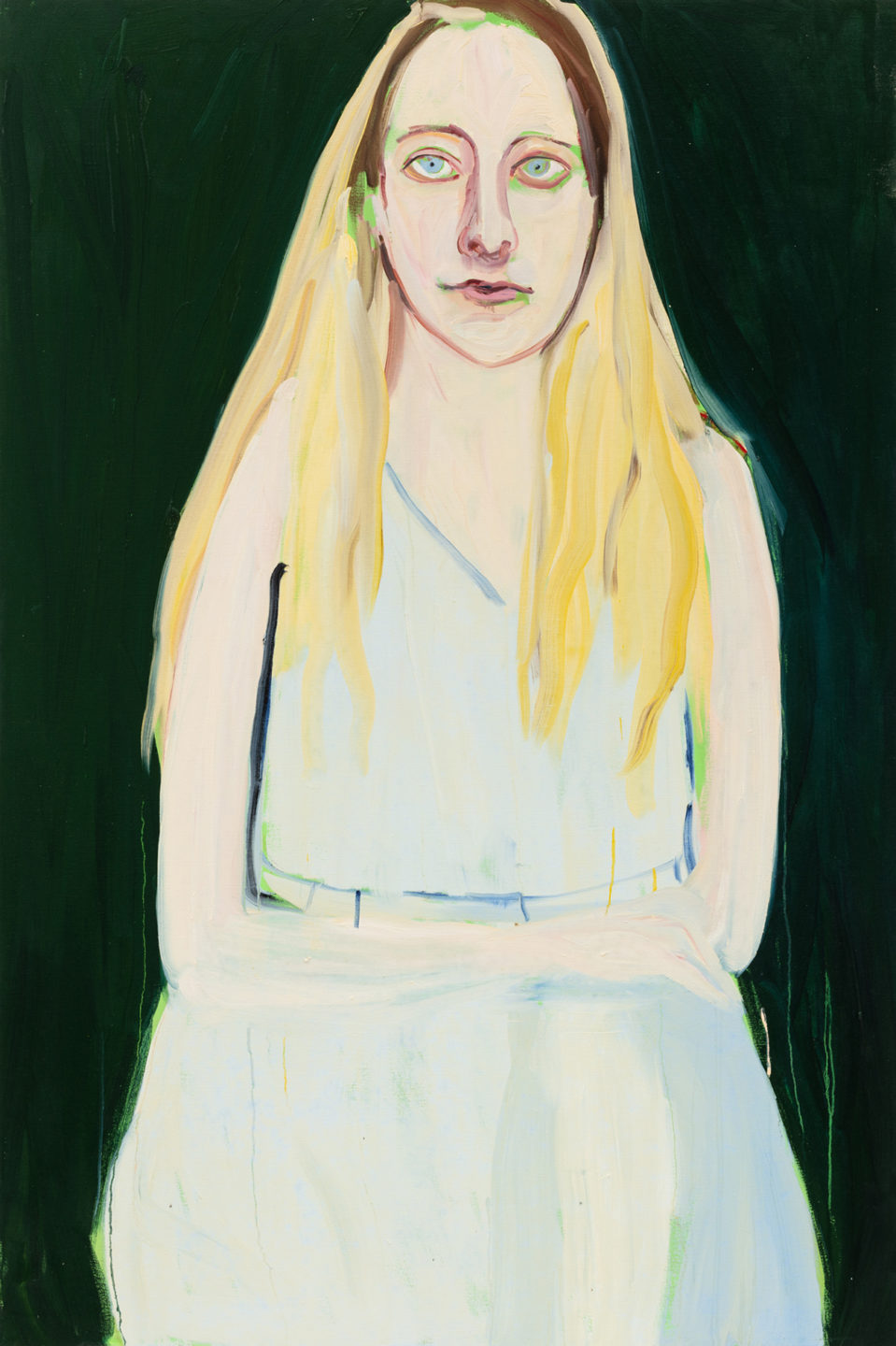 Joffe has often talked about her paintings in terms of transitions, those associated with growing and ageing, as well as her attempt to mark a life’s milestones. These concerns are especially pronounced in her images of children and teenagers, such as Bella, 2017, and Blonde Girl in a Blue Dress, 2020. The ways in which we inhabit or enact gender, accentuated during times of accelerated transition such as adolescence, are keenly present in such works. 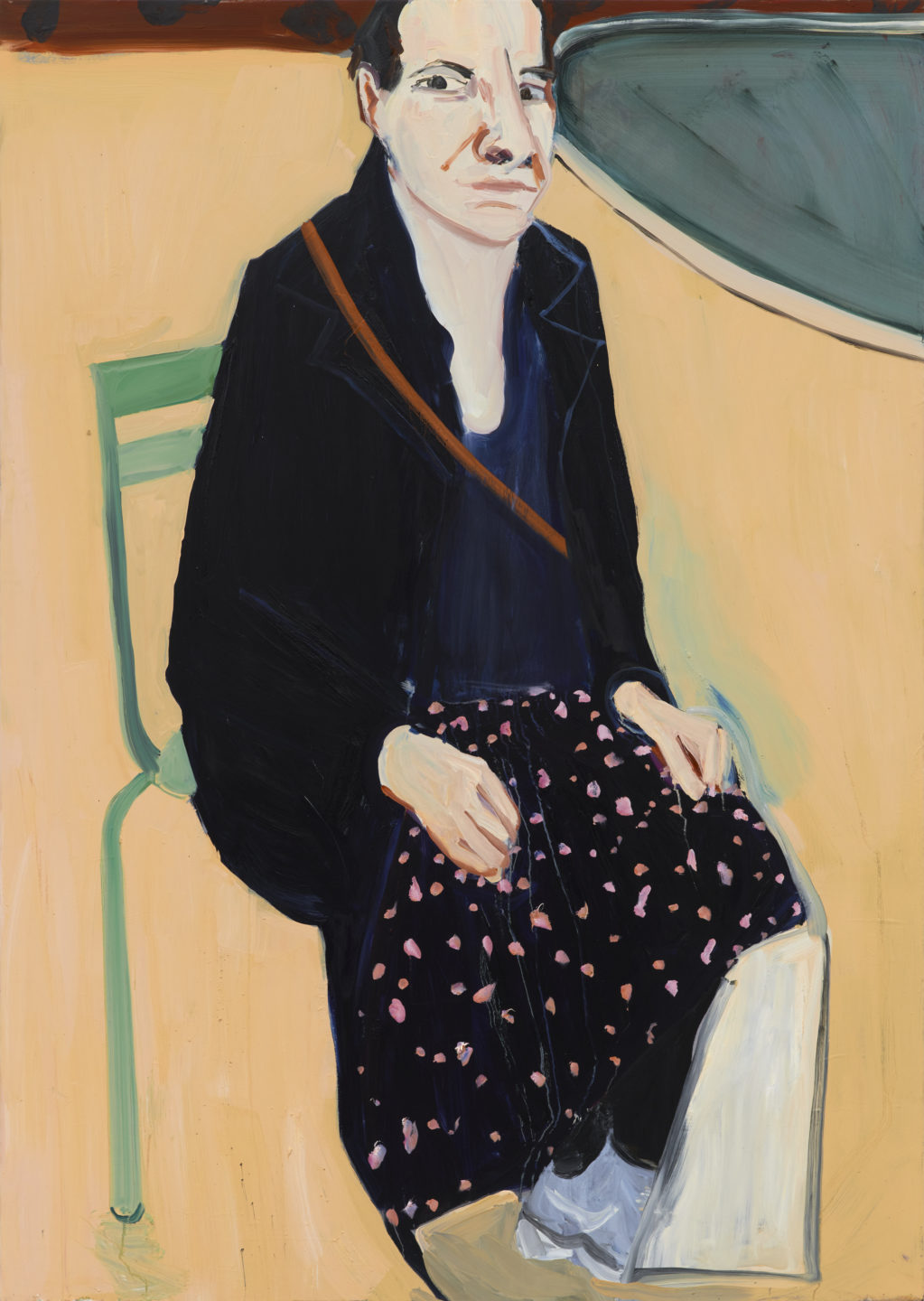 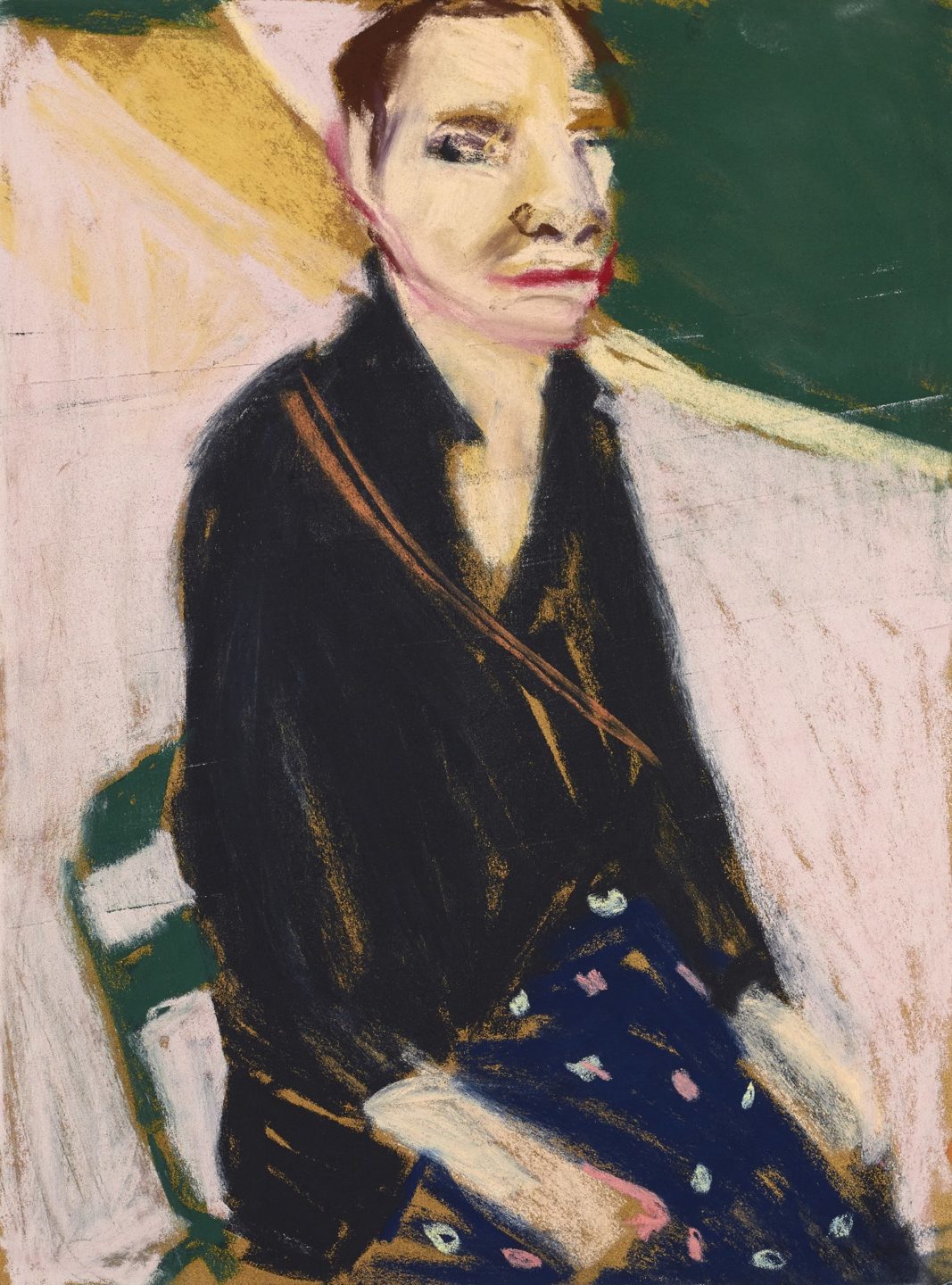 Chantal Joffe, Self-Portrait at the Tuileries, 2019

Presented together, Self-Portrait at Tuileries, 2019, and an associated pastel, capture Joffe seated in an iron chair in Paris’ Jardin de Tuileries, a rare painting of the artist seated outside within a public space.