Conrad Shawcross: The Measures of Change

Victoria Miro Venice
19 May–10 July 2021
Tuesday–Saturday: 10am-1pm & 2-6pm
Monday by appointment
No booking is required when visiting the exhibition We welcome a maximum number of 5 people at a time to our Venice gallery

Coinciding with the opening of La Biennale di Venezia: The 17th International Architecture Exhibition, The Measures of Change features a number of the artist’s celebrated Fracture sculptures, the debut of a new series of Perimeter Studies sculptures, and prints from a new body of work, Studies for The Patterns of Absence.

Conrad Shawcross creates sculptures and installations that, imbued with an appearance of scientific rationality, explore subjects that lie on the borders of geometry and philosophy, physics and metaphysics. He has gained a global reputation for extending the possibilities of art in the public realm and in dialogue with architecture.

Conceived of especially for the Venice gallery, this exhibition features the most recent examples of the artist’s Fracture sculptures – ethereal, complex geometric forms that seem almost to disappear as they rise up and expand – a new sequence of Perimeter Studies that explore the geometric properties of the five platonic solids, and a new series of prints inspired by the gallery’s waterside location, which highlight the connections between geometry and natural phenomena in the artist’s work. 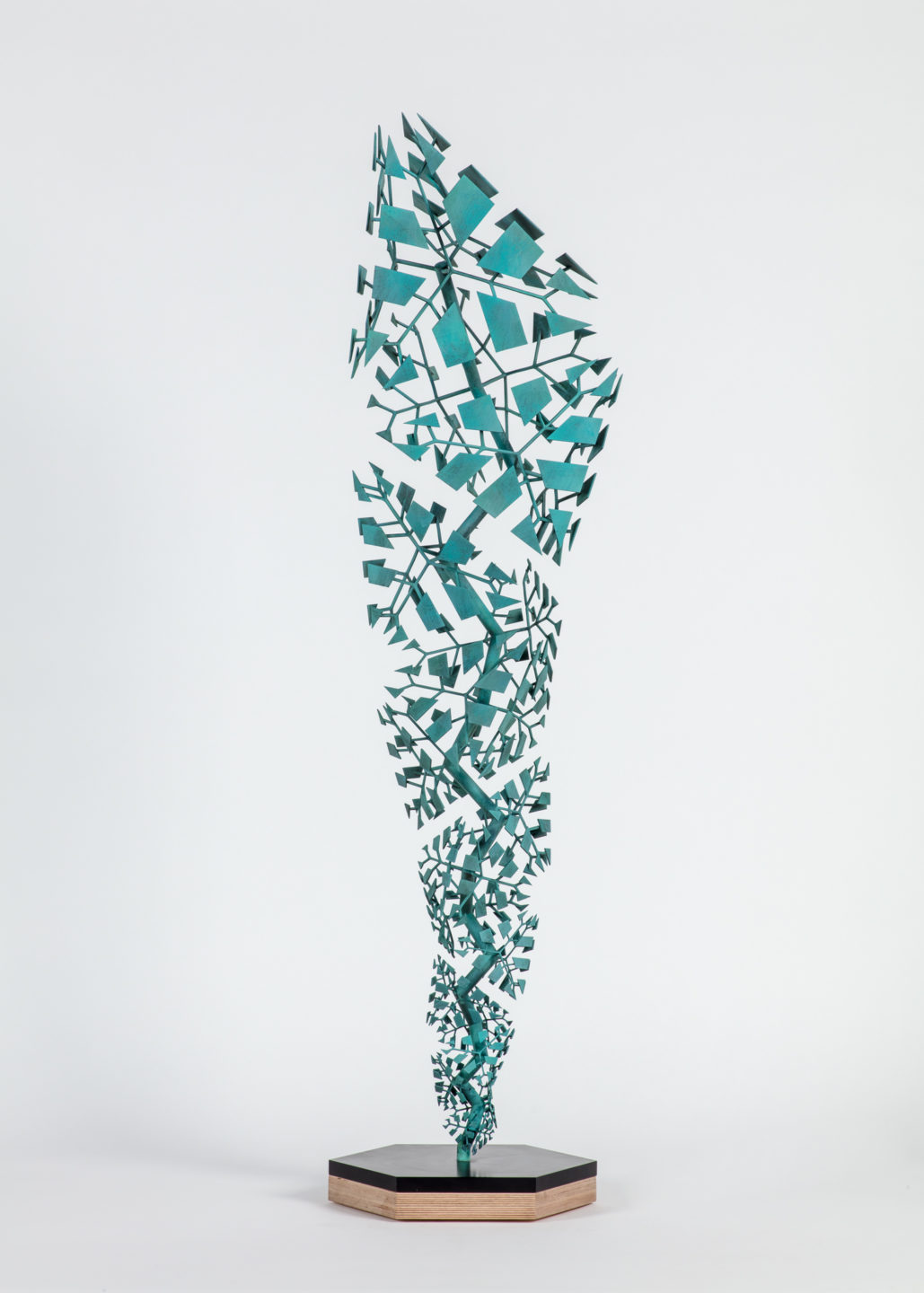 ‘There is sometimes more implied movement, turbulence and change within stasis than there is in movement itself.’ — Conrad Shawcross

The title of this show, The Measures of Change, is taken from a recent conversation between the artist and Carlo Rovelli. While the works in the show are static they are in fact attempting to convey something that is abstract, dynamic and in flux; eluding to notions of expansion, growth, entropy and disappearance.

Borne out of his Paradigms, which are an ongoing exploration of the tetrahedron – a four-sided non-tessellating form and being the simplest of the platonic solids, conceptually the symbol of an indivisible unit of matter – Shawcross’ Fractures are ethereal forms that seem almost to disappear as they rise up and expand. Imbued with references to the manmade and natural worlds, each Fracture contains a central helical stem, a twisting spine that supports a series of branches which in turn support hundreds of triangular leaf-like fragments that dissipate in precise formation.

Discussing these works, the artist says, ‘These works at first appear almost like a scientific model, like an amino acid or a piece of DNA or a protein. Yet there is a sense of time to these works, a sense of entropy, of growth, of expansion, of things moving forward. And so there is a sort of paradox to the forms. At first they appear like some kind of model, an empirical model, and at the same time they have this sense of entropy, of change. The title of this show, The Measures of Change, is very much about these works in that they are a model of something which is in stasis, and yet they seem to contain a sense of change over time. They occupy these different contradictory states and remain undefinable, elusive and paradoxical.’ 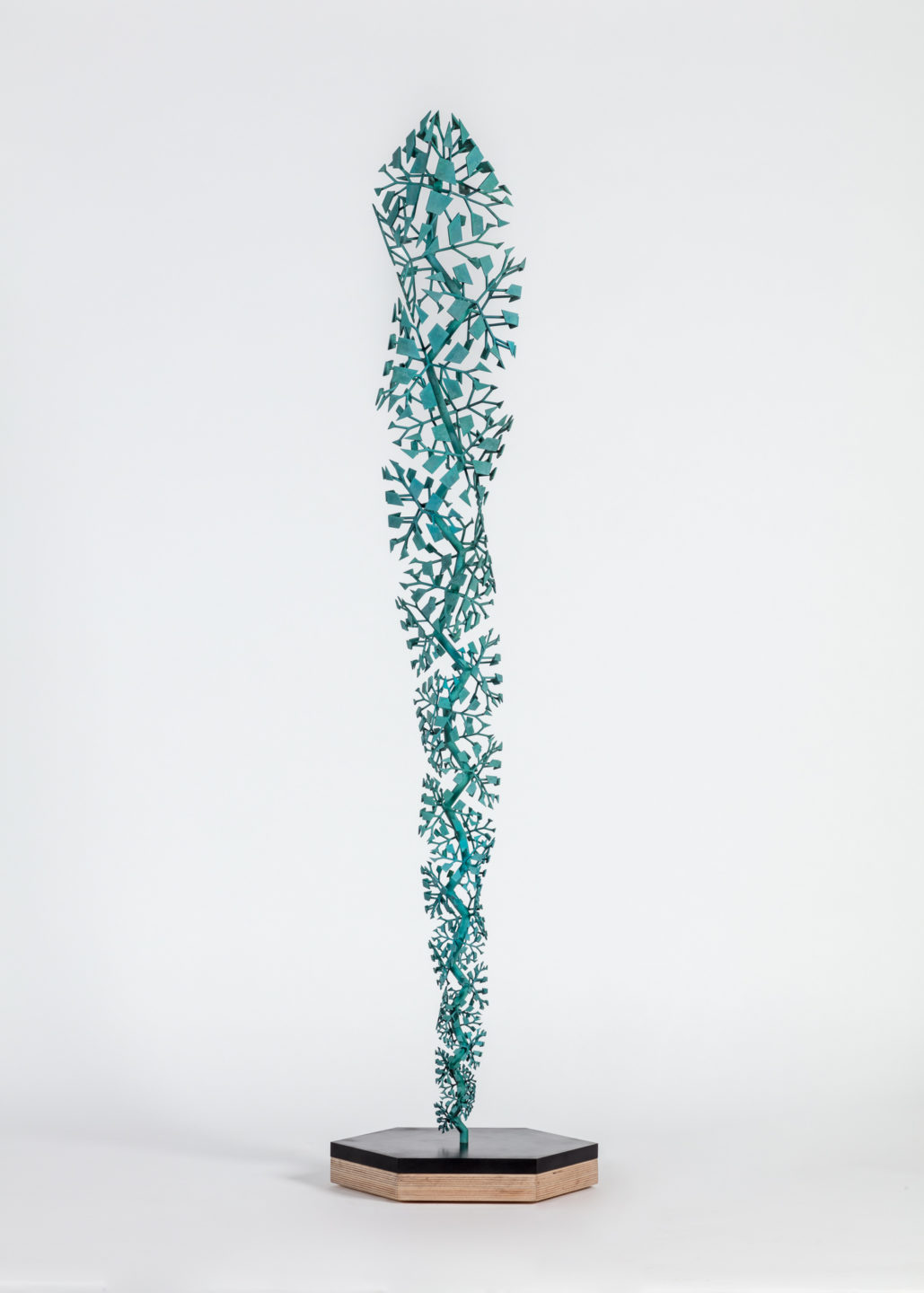 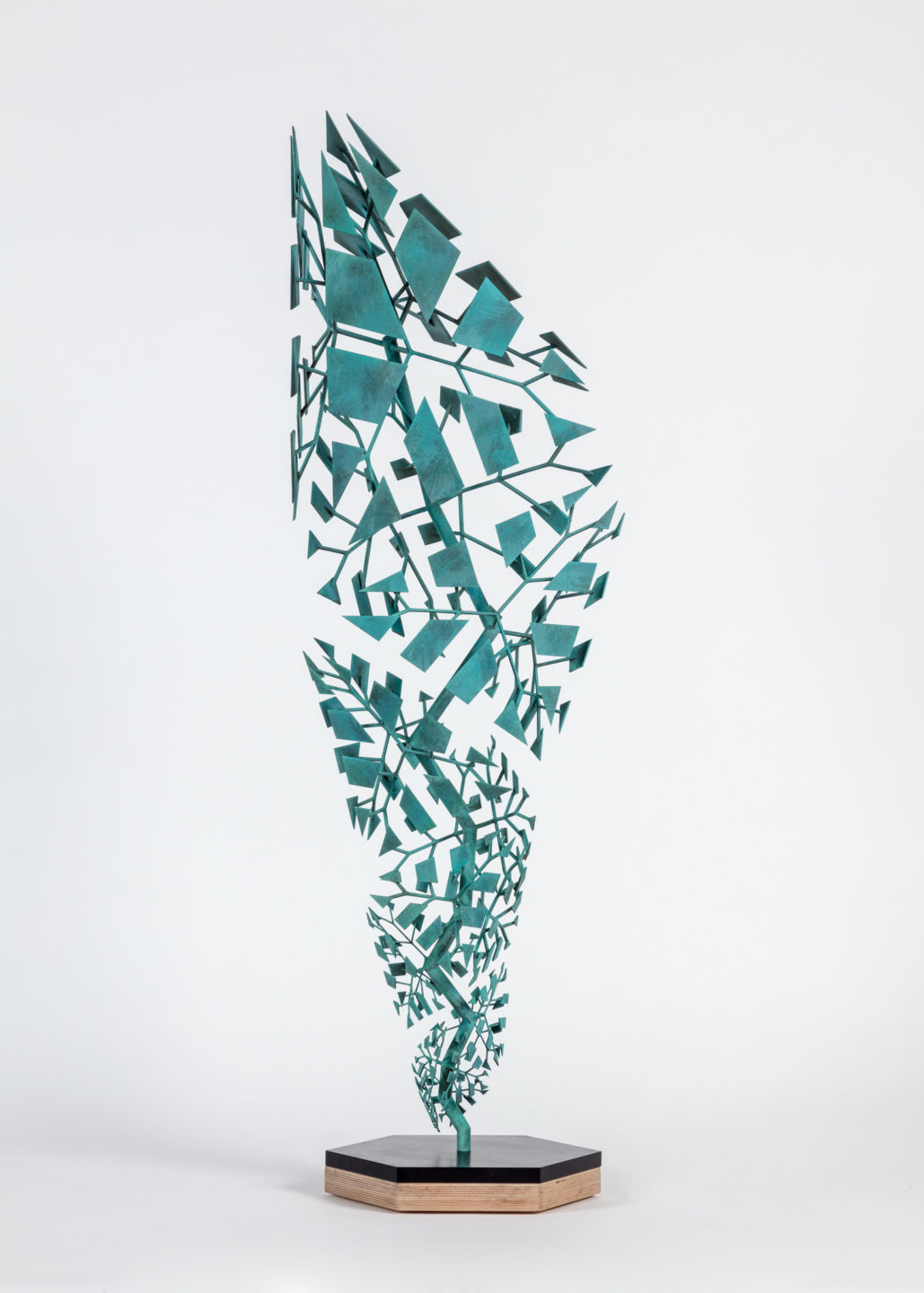 ‘The bronze works, which are in a green oxide, all have a different growth factor. At first they appear almost like a scientific model, like an amino acid or a piece of DNA or a protein. Yet there is a sense of time to these works, a sense of entropy, of growth, of expansion, of things moving forward.’ — Conrad Shawcross 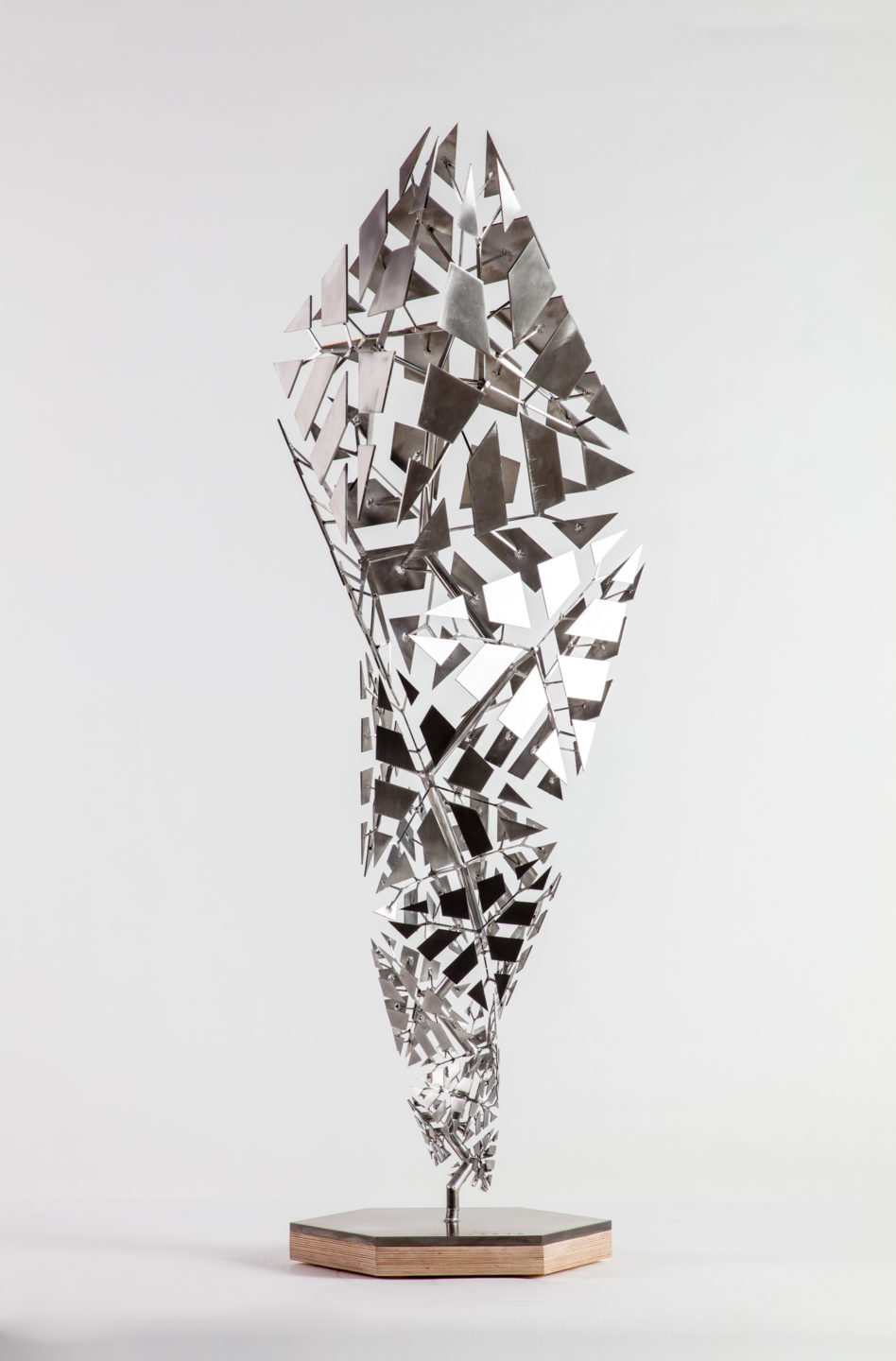 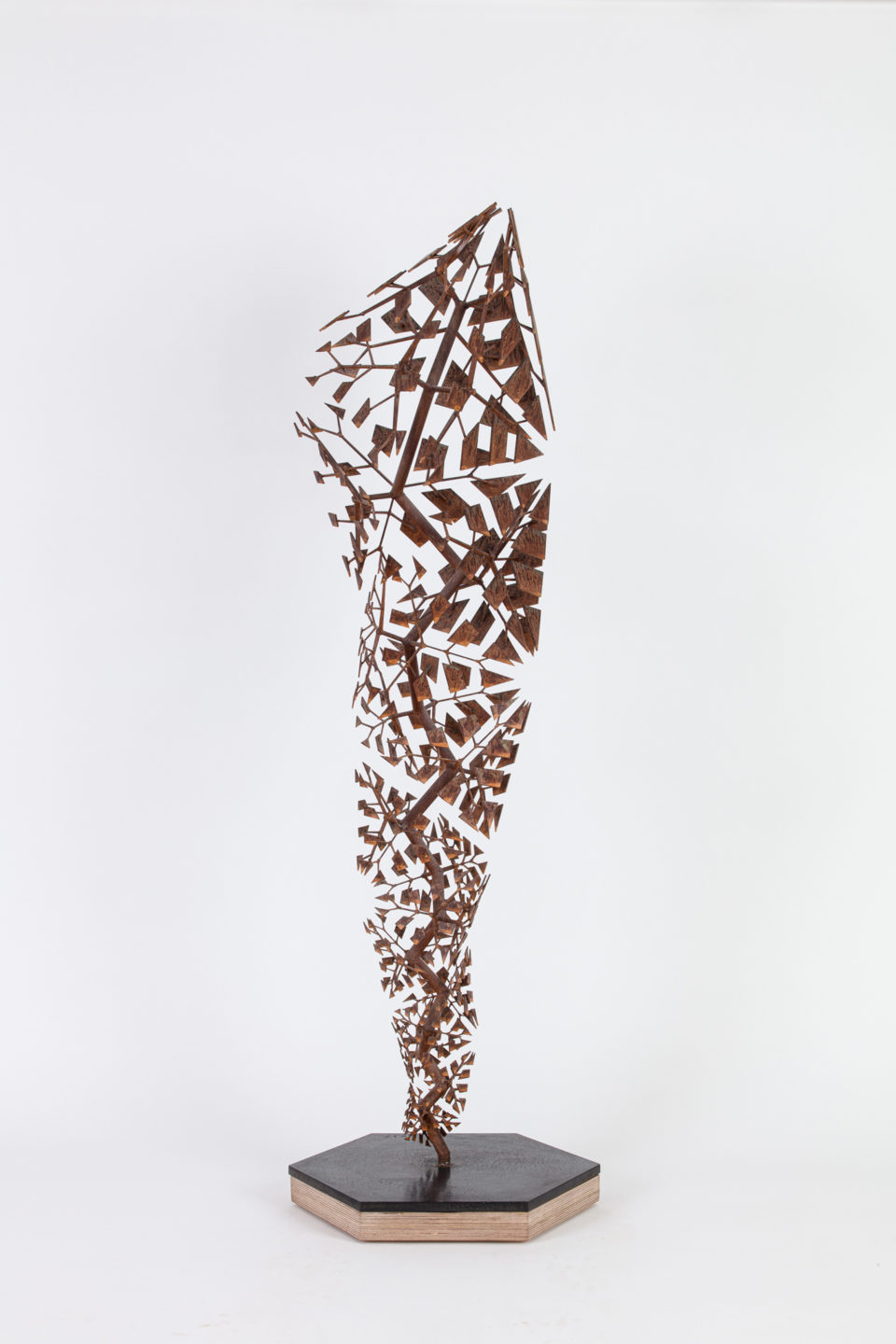 For Shawcross, an aesthetic of the designed, the scientific and the rational serves as a device to cloak more poetic, philosophical and metaphysical themes, which are foregrounded in his Fractures. As he says, ‘These Fractures have many references. They are, on one level, very industrial and geometric. On another level, I’ve taken references from the pattern on a giraffe’s neck, to the dappled light of the sun through a woodland canopy, to the bifurcation of trees and the way that branches grow, emanate and spread… I hope that they feel very industrial, refined and minimal and at the same time that they have this resonance that sends your brain back to something that’s familiar, something that’s natural, something that is profound and beautiful and ubiquitous.’ 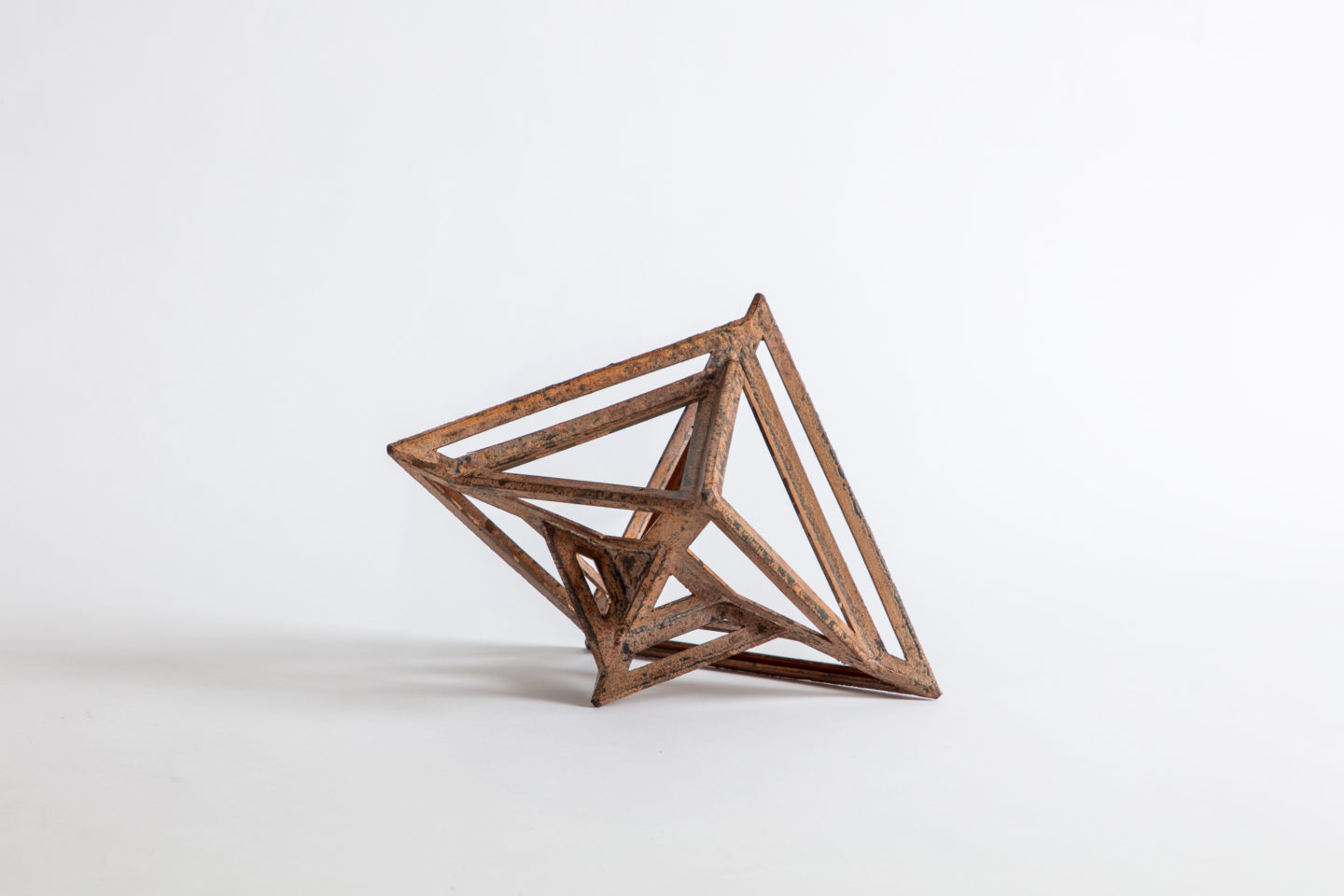 ‘The geometries can be compared and contrasted, and defined against each other, like musical notes within a score.’ — Conrad Shawcross

Explored across various materials, scales and registers of display, the Perimeter Studies have been an integral aspect of Shawcross’ practice over the past decade. This new sequence of ten works, five structural and five solid, explores the geometry and the geometric properties of the platonic solids – the tetrahedron, the octahedron, the cube, the dodecahedron and the icosahedron.

The artist explains, ‘The radiant properties of these five solids are very much defined by the fact that they equally divide up the surface of a sphere. What we’ve done here is pushed and pulled and stretched these surfaces to form these crystalline geometric explorations. I think this is the first time I’ve shown an array of all five platonic solids together. They’ve been rendered here in weathered steel to form this very scientific shelf in which the geometries can be compared and contrasted, and defined against each other, like musical notes within a score. They gain their gravitas and their meaning through their juxtaposition with each other.’ 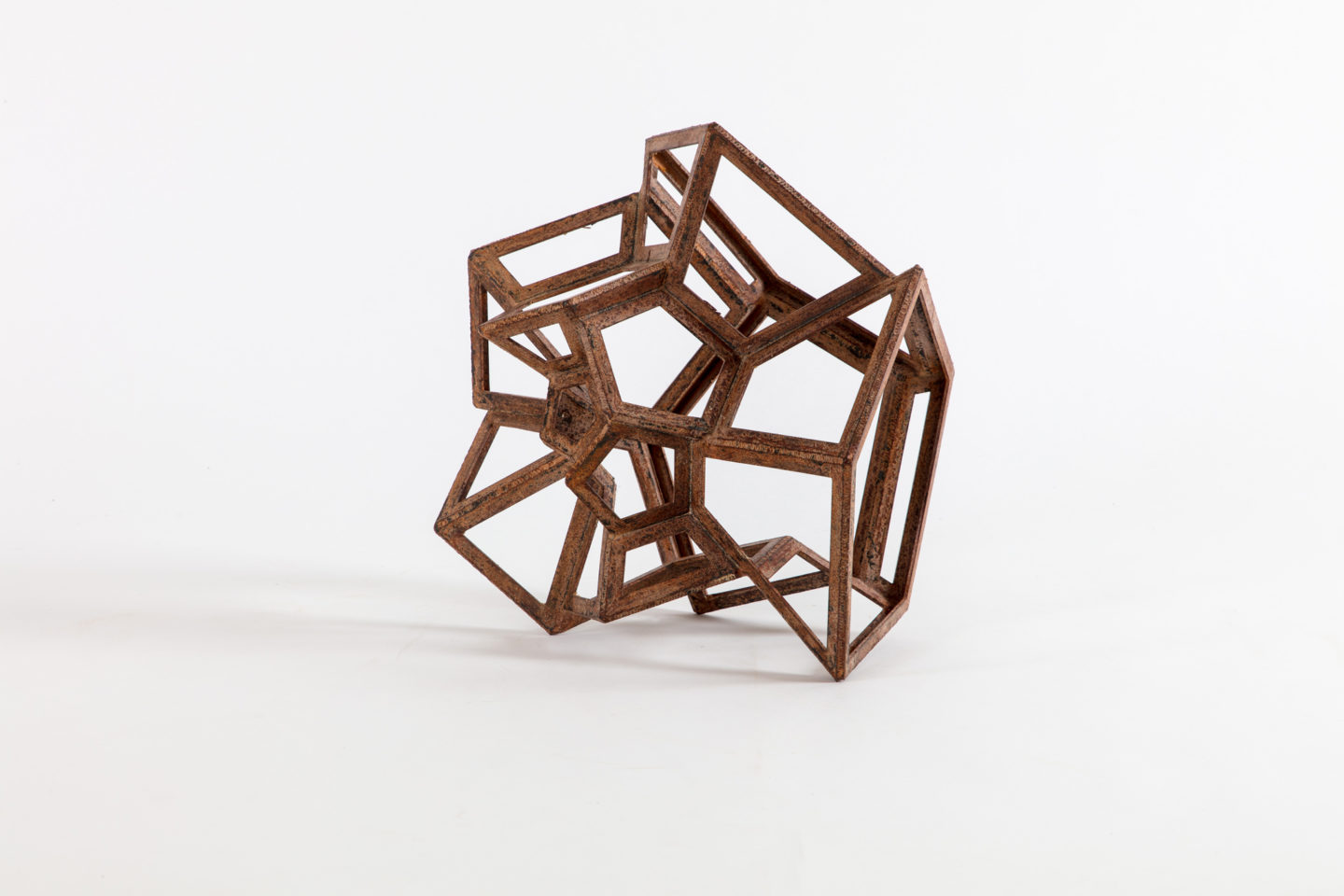 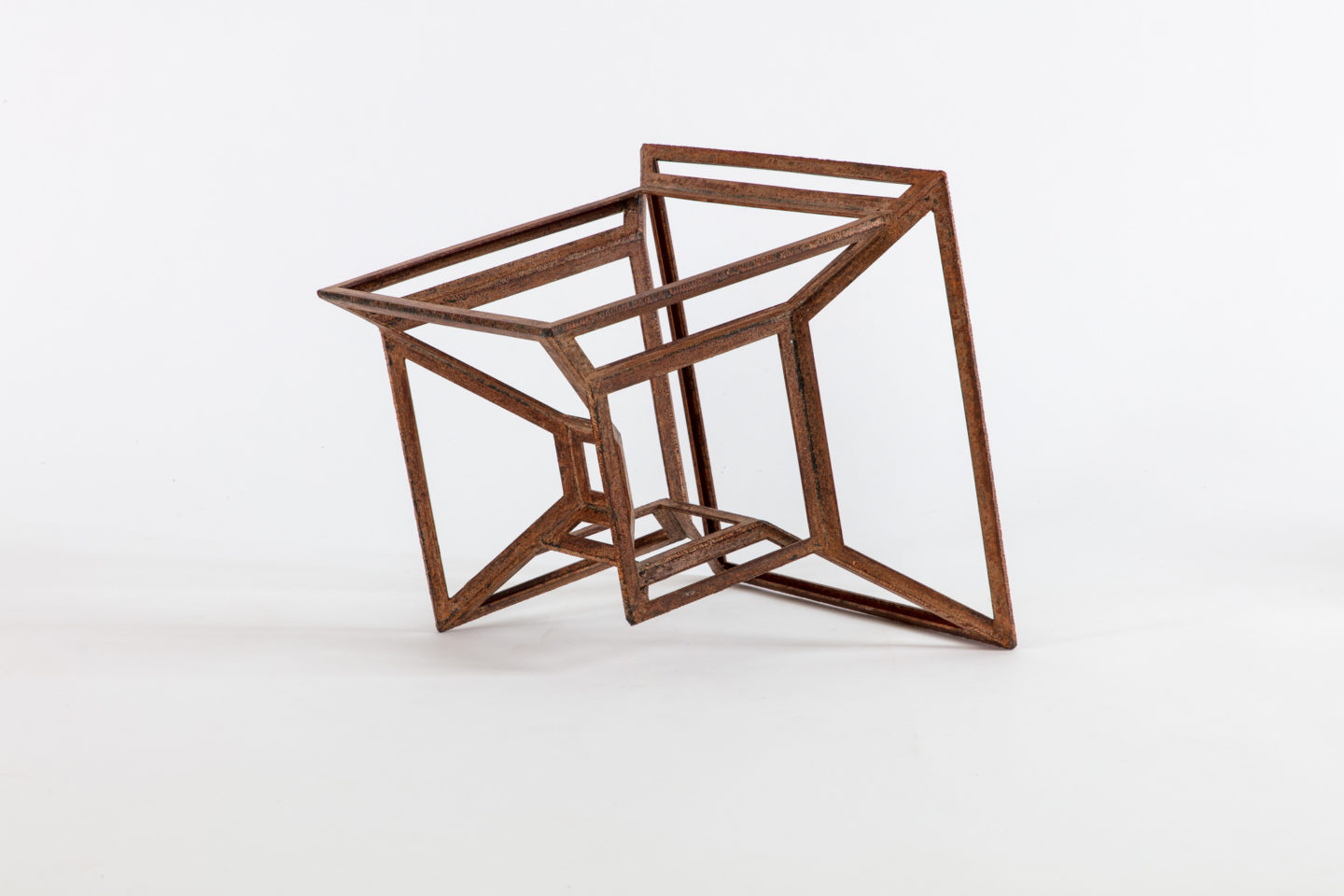 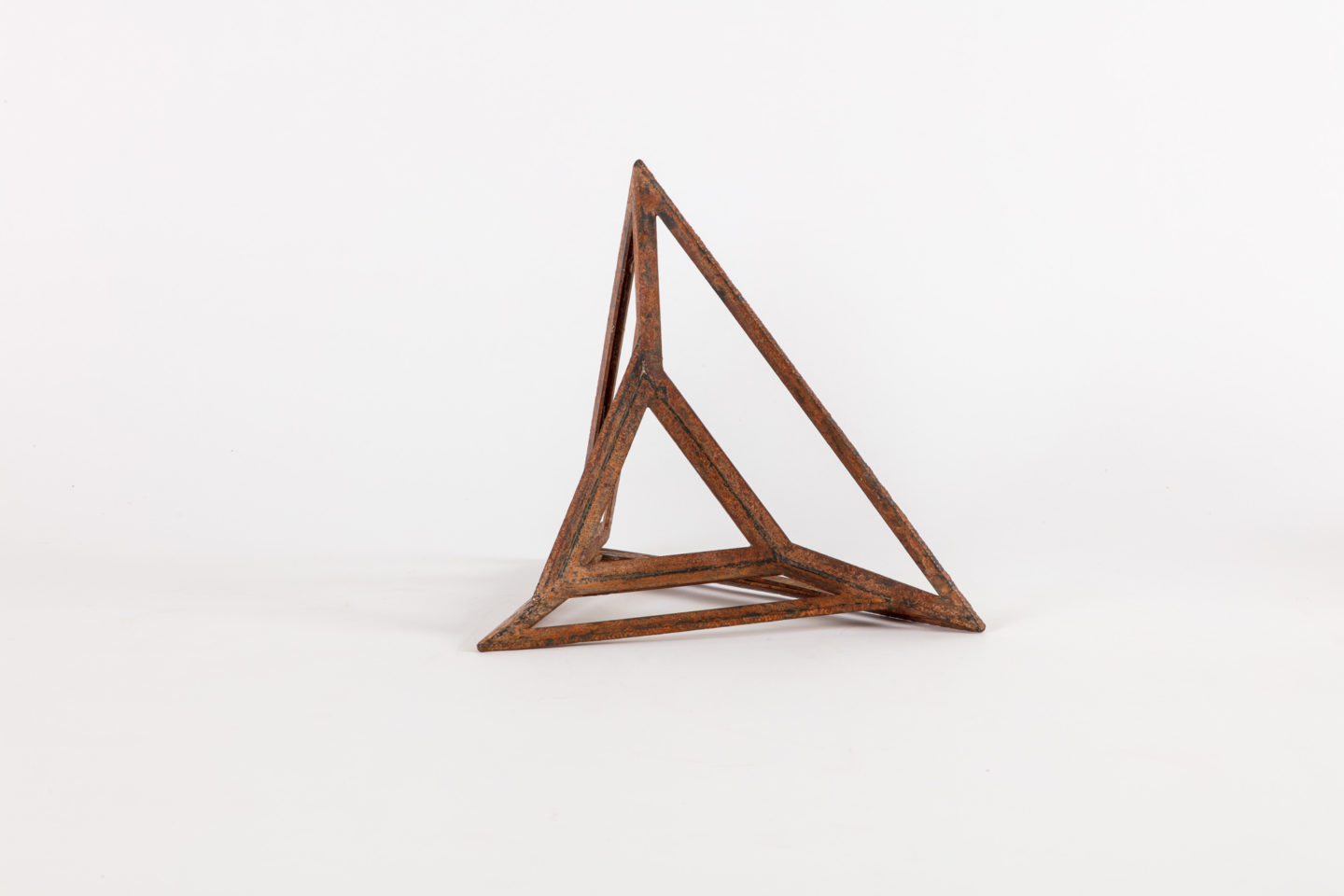 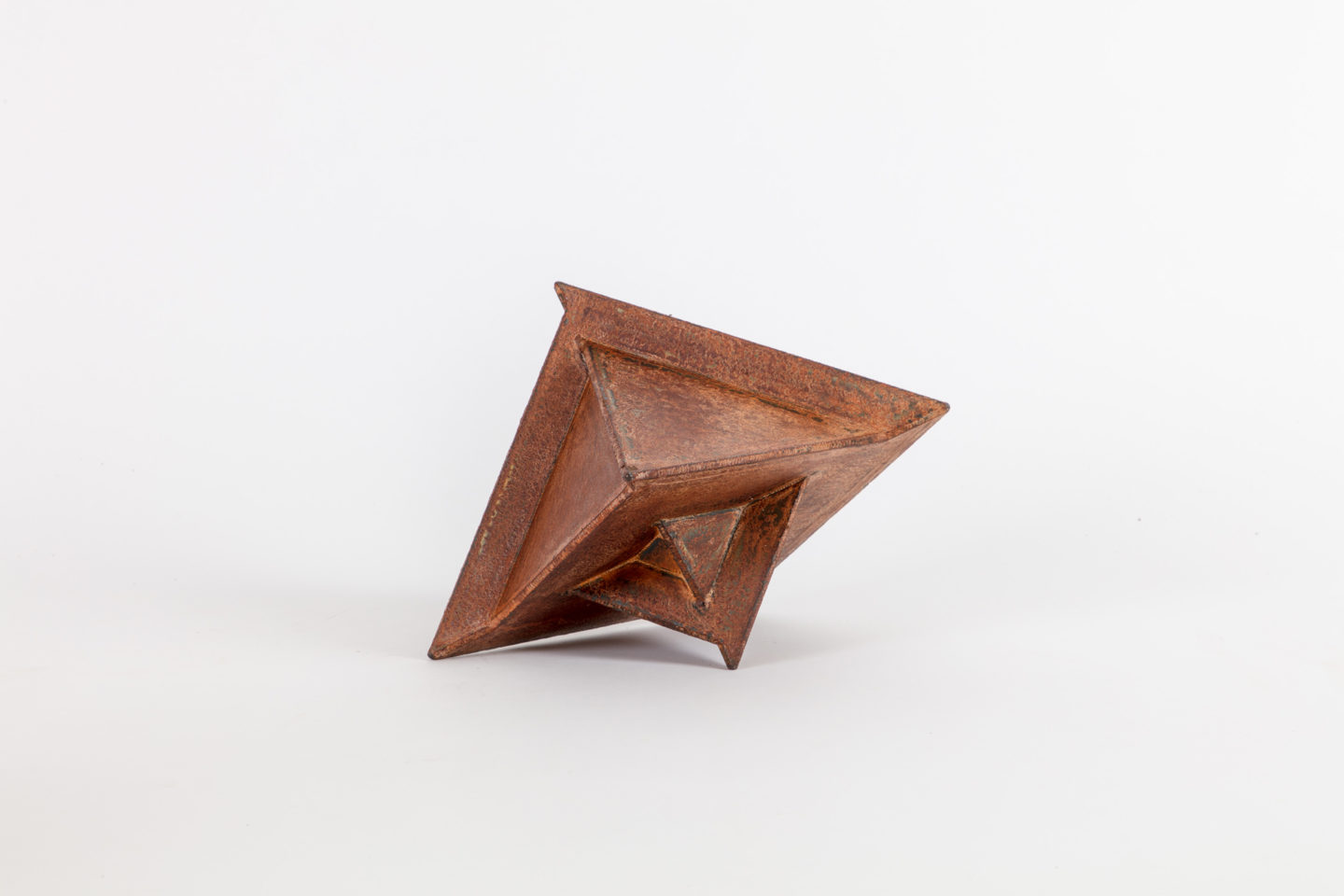 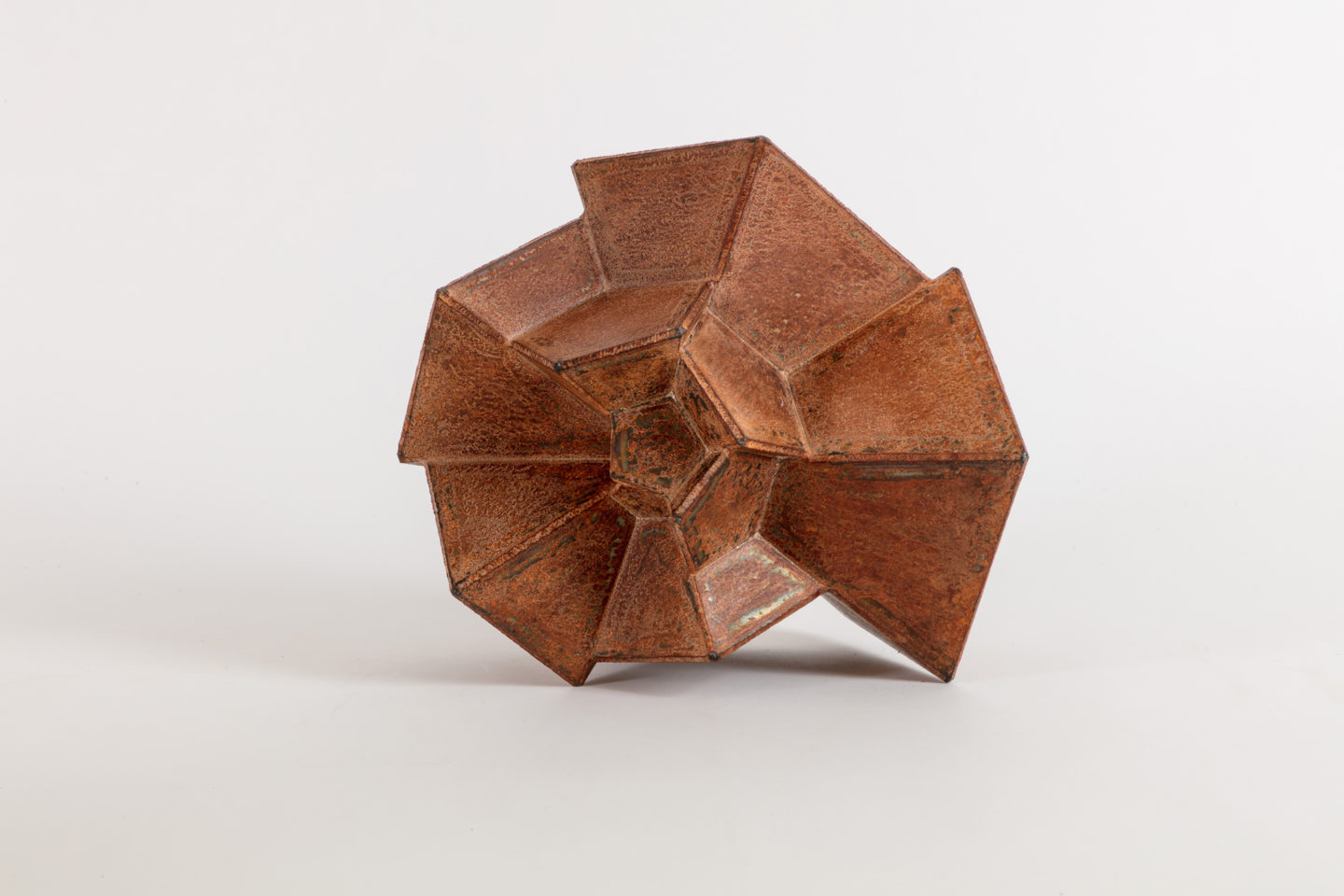 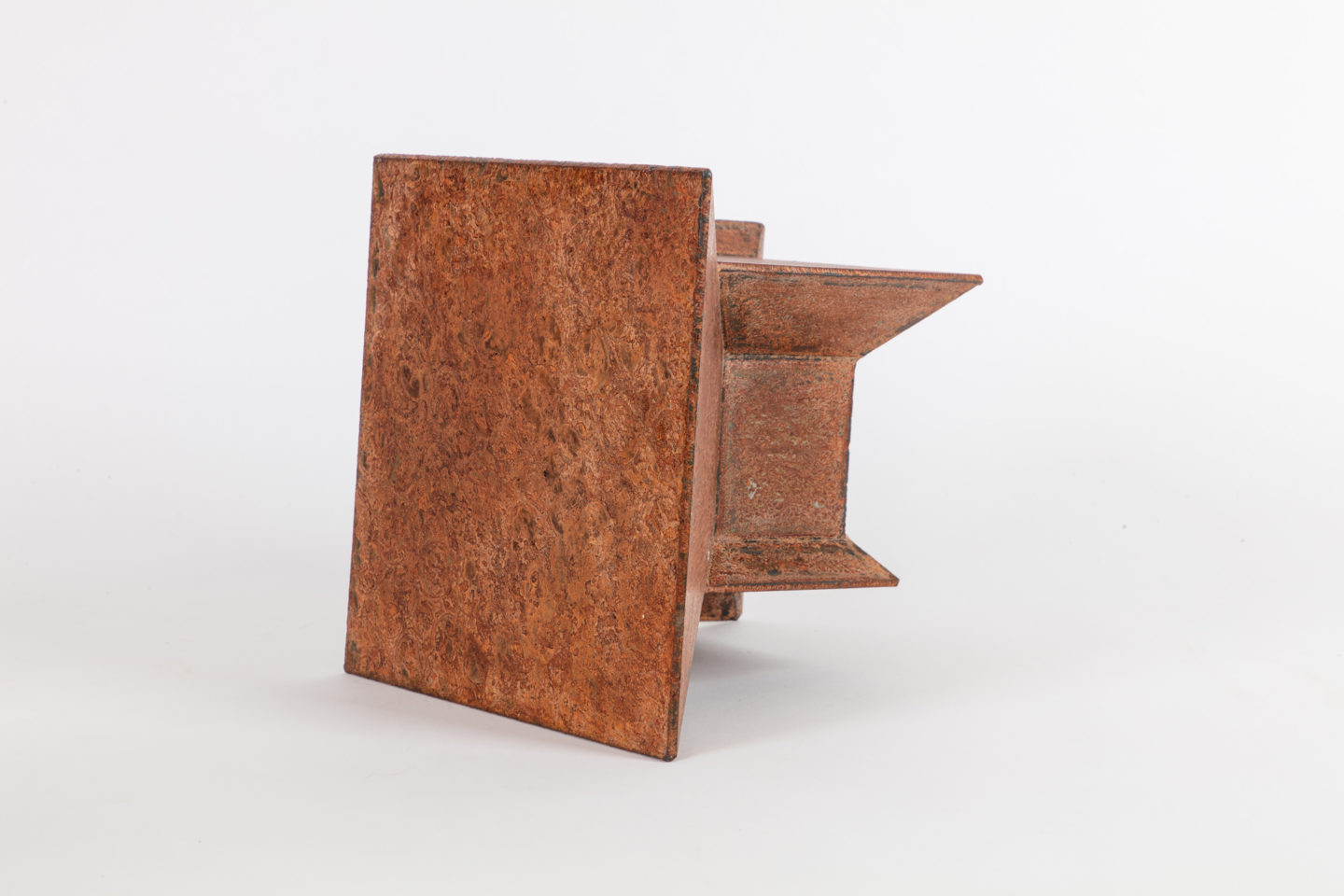 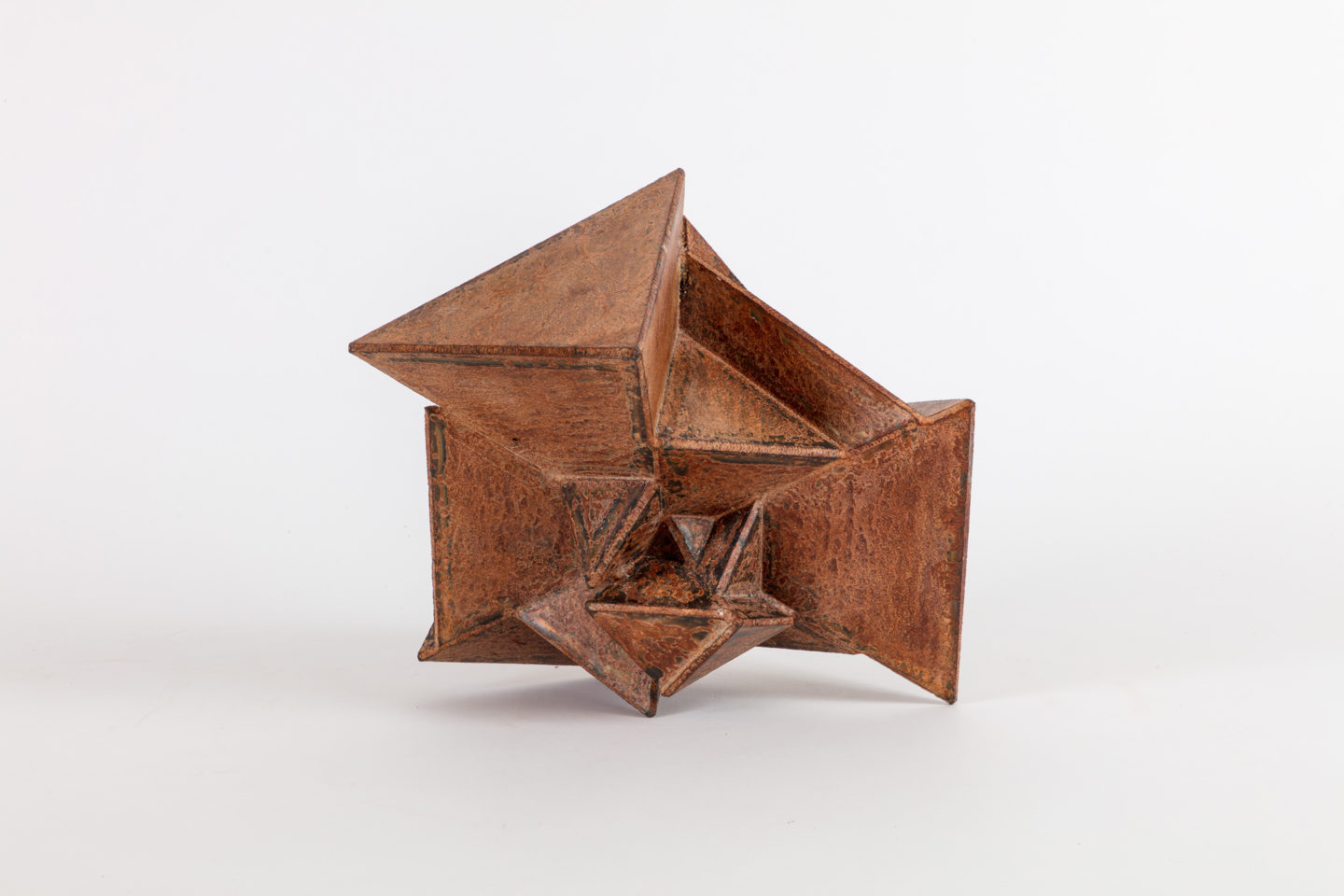 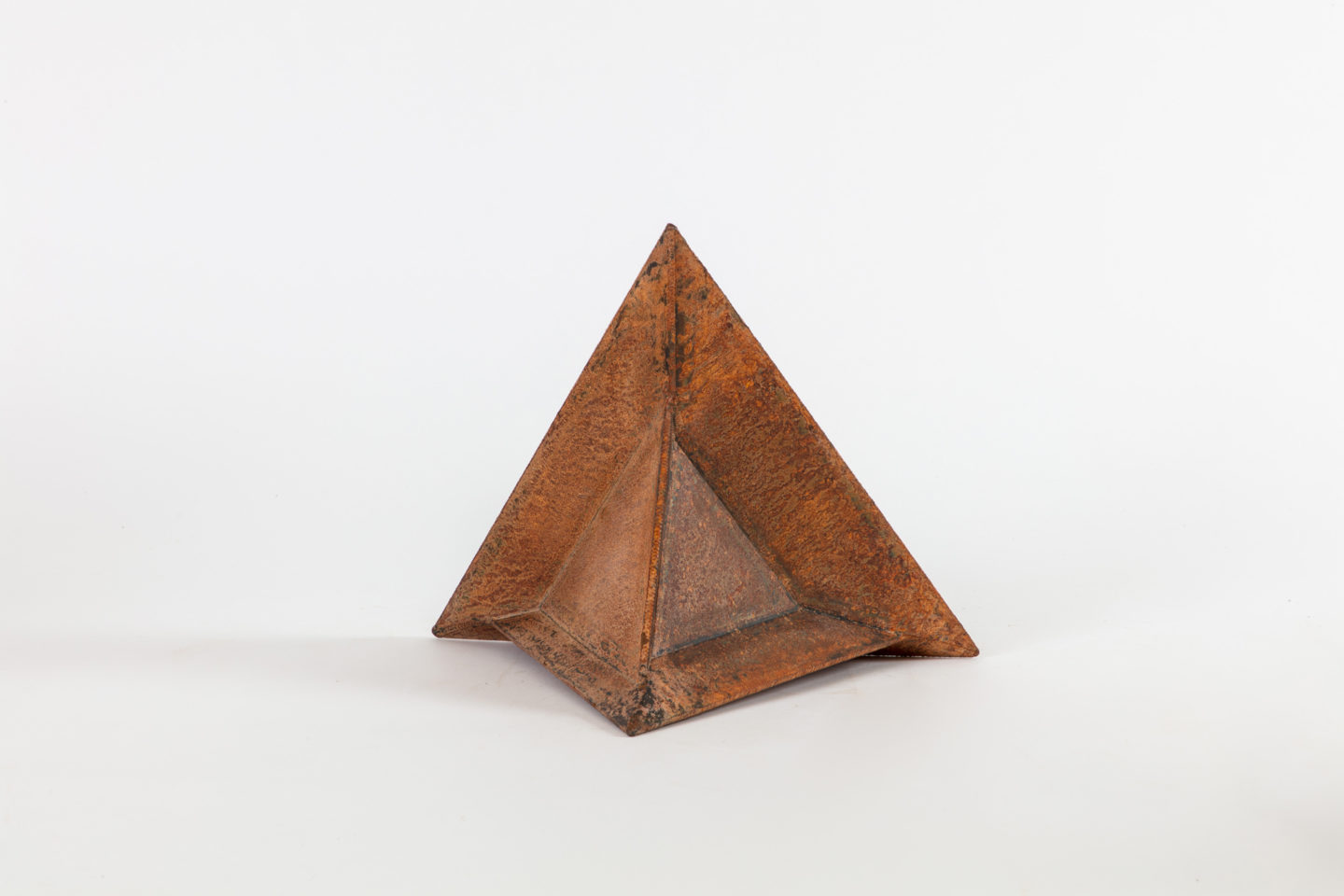 Studies for The Patterns of Absence: Venetian Array A number of new prints, each a Study for the Patterns of Absence, have been inspired by the gallery’s canalside location in Venice. Using algorithms to create interference patterns, which are printed in dynamic sequences that move through a chromatic scale of blues, greens and complementary colours, the artist has arrived at a series of works whose optical effects are reminiscent of the shifting reflected light of the sea.

‘I hope they show a mathematical simulation of these very beautiful phenomenon that we find so inspiring and transformative,’ Shawcross says. ‘I think being situated next to the canal, these pieces have a particular resonance. And facing the Fractures within the room, they also have an amazing counterpoint. They’re all about pattern and about nature – about the simulation of nature in very geometric, very refined ways.’

This investigation of optics to achieve disrupted dynamic sculptural surfaces though the juxtaposition of hole patterns is a relatively recent aspect of the artist’s practice. Shawcross explains, ‘In essence this can be described as the Moiré effect but we have tried over the past seven years to create a very empirical understanding of the variables and constraints that creates such varied effects. While I love the complex visuals I’m drawn also by the philosophical and perceptual implications; that combinations of absences can create pattern, complexity, even illusion.’

These aspects converged in the recent major work The Patterns of Absence, 2020, created for the artist’s 2020 exhibition, Escalations, at Château La Coste in Provence, France. The suspended work, which is four metres across, comprises two slowly counter-rotating discs, both perforated using a mathematical algorithm. The sum effect allows shifting dappled light to permeate through the voids within their surfaces.

Studies for The Patterns of Absence 2 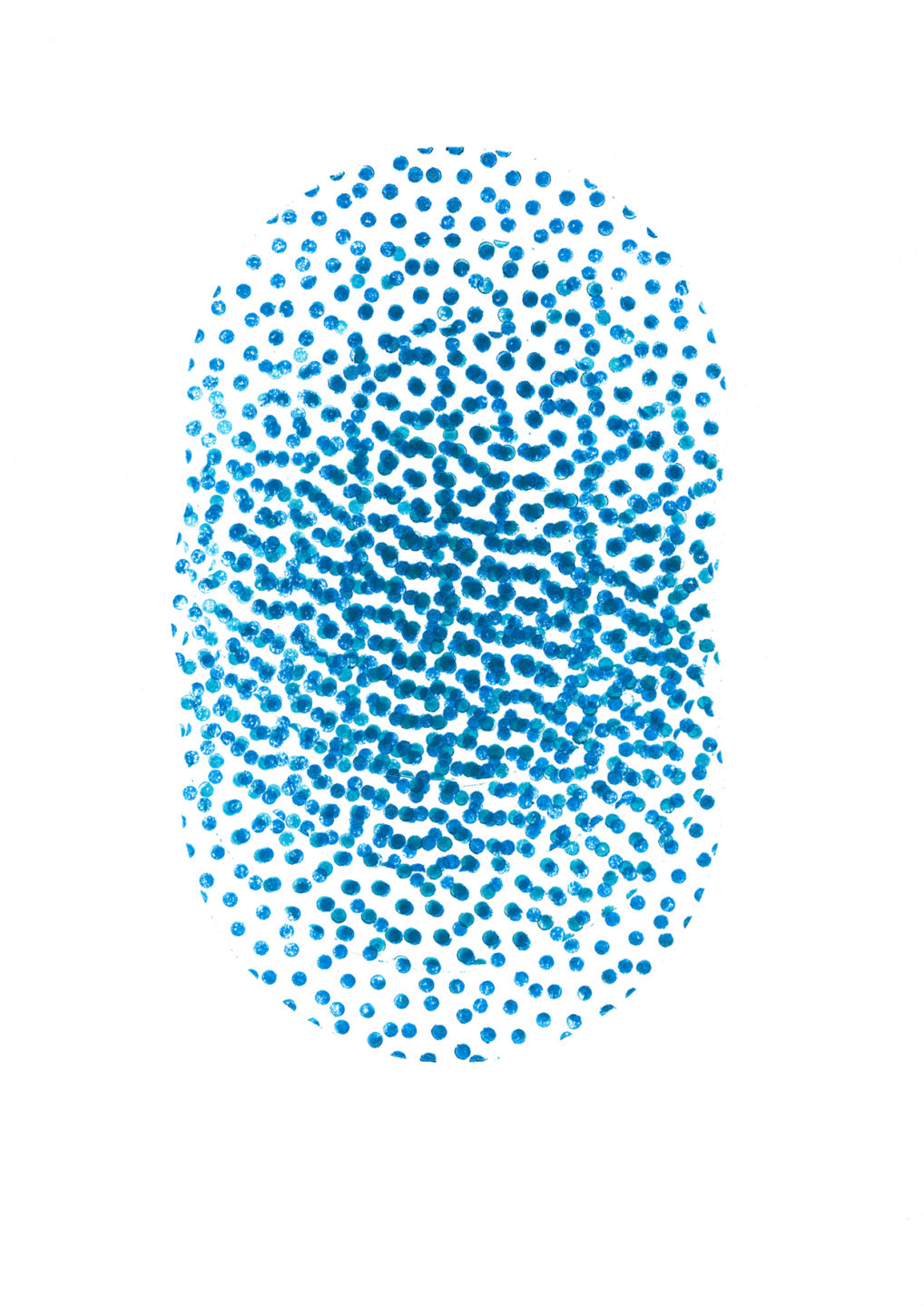 Conrad Shawcross, Study For The Patterns of Absence; Venetian Array (Pearl Blue/Turquoise) 2 a, 2021 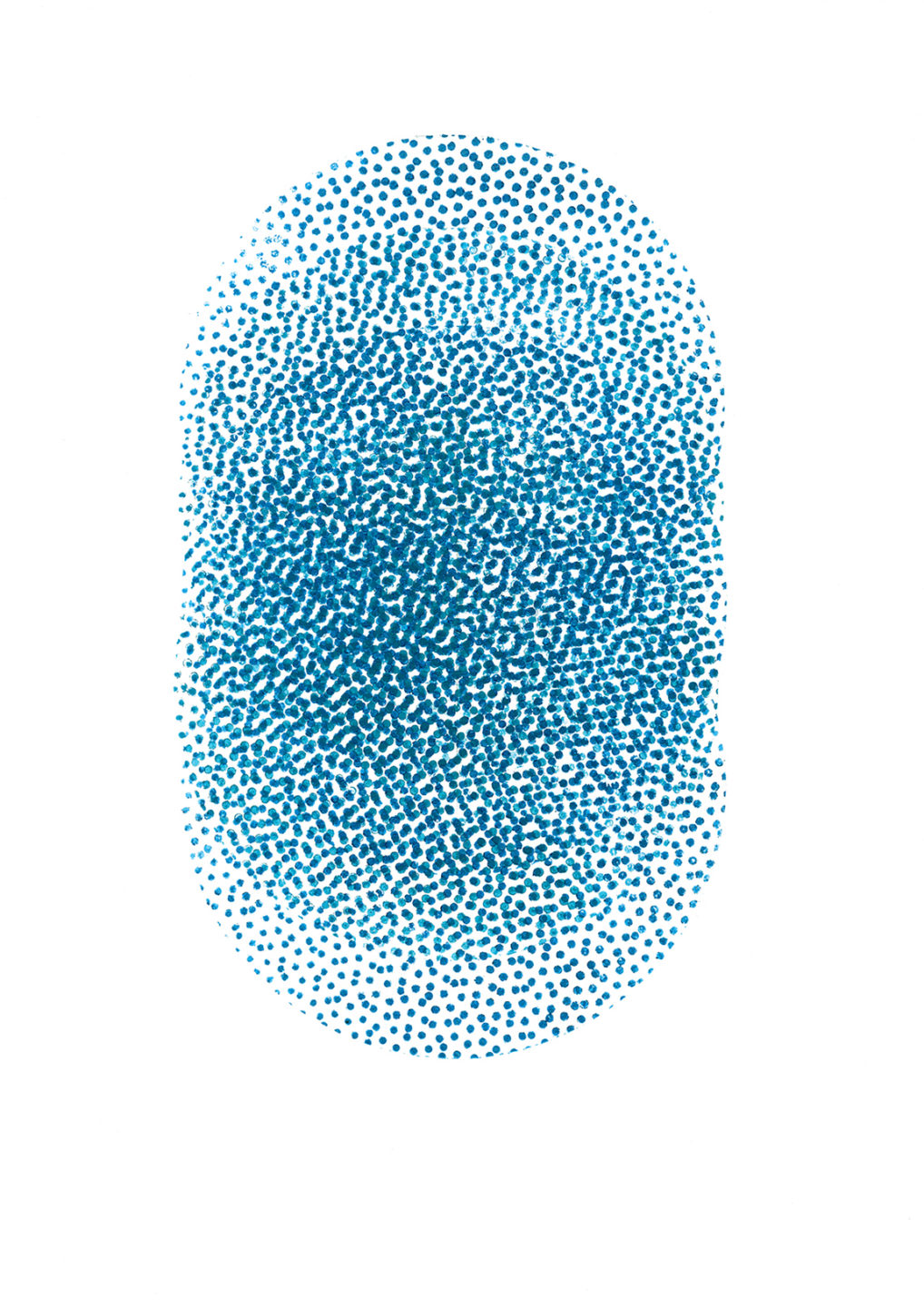 Conrad Shawcross, Study For The Patterns of Absence; Venetian Array (Pearl Blue/Turquoise) 2 b, 2021 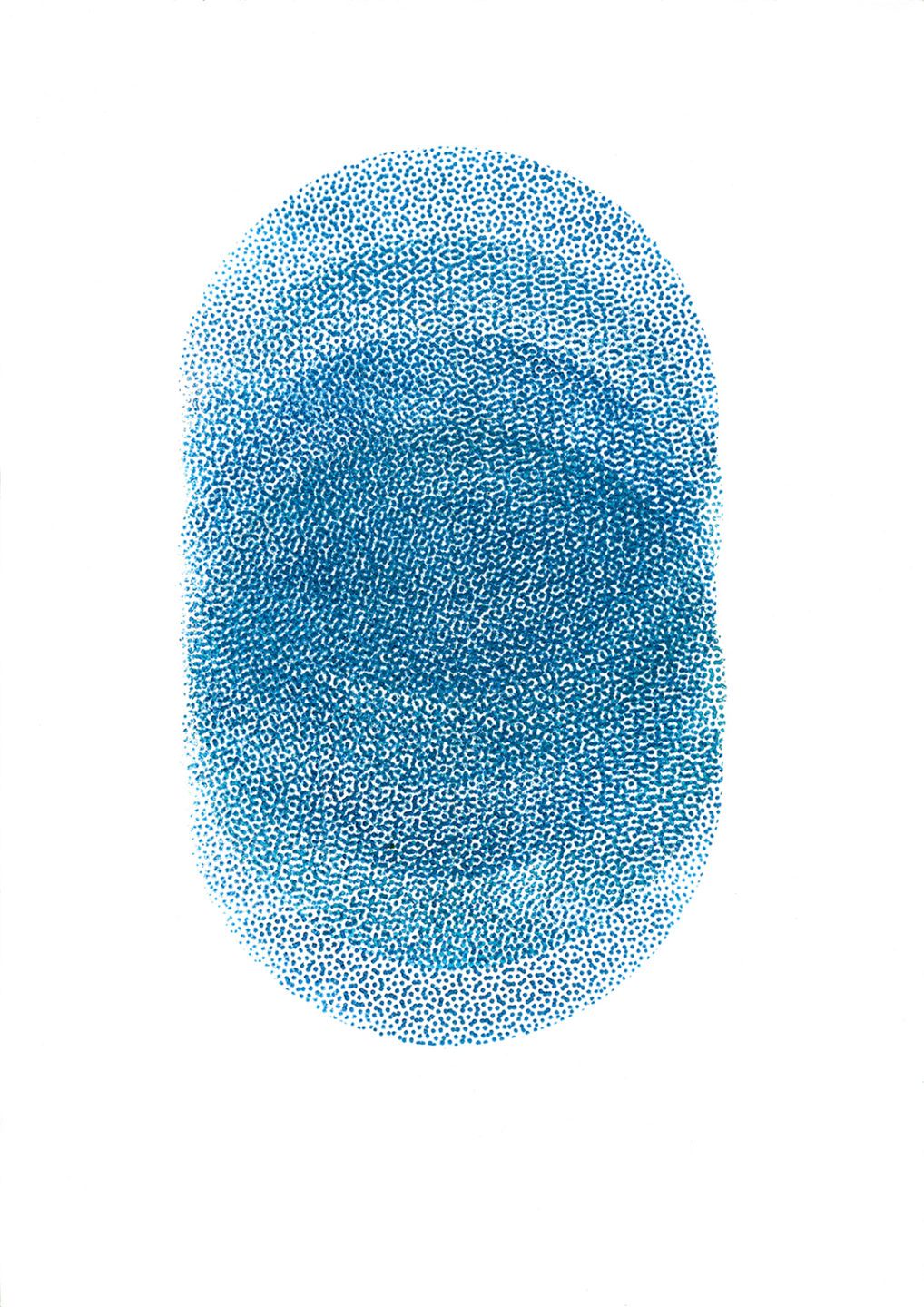 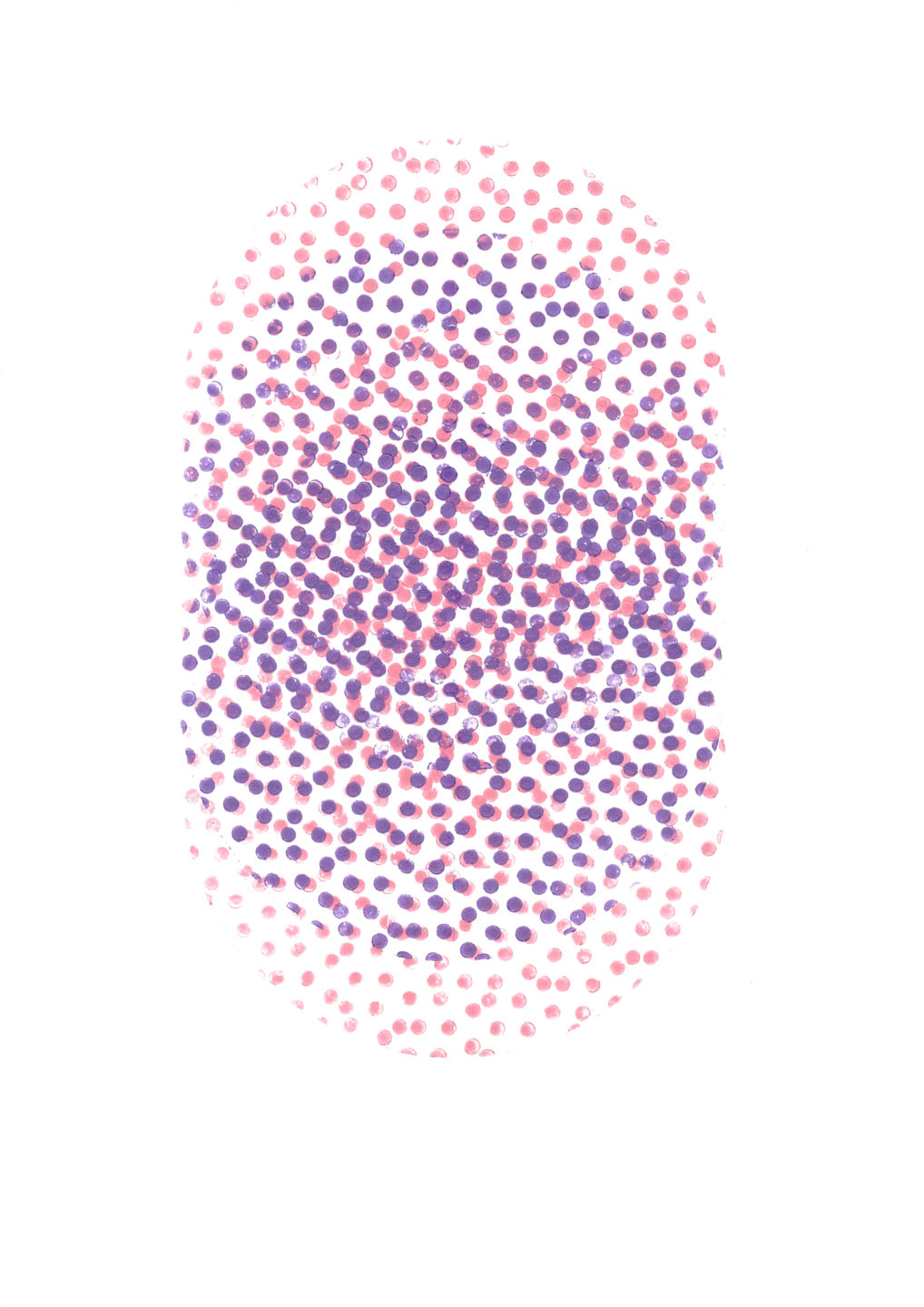 Conrad Shawcross, Study For The Patterns of Absence; Venetian Array (Pearl/Pink/Purple) 5 a, 2021 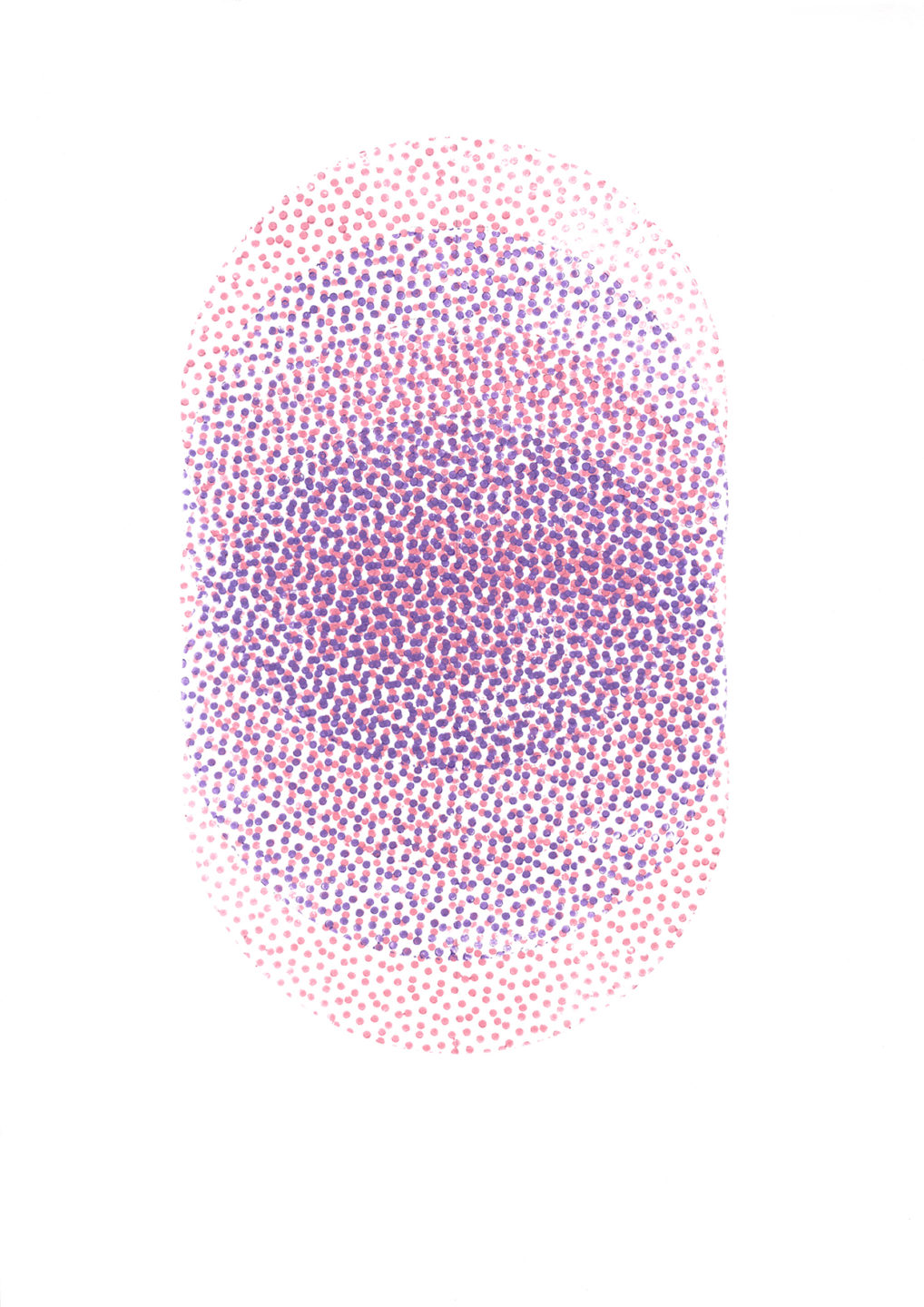 Conrad Shawcross, Study For The Patterns of Absence; Venetian Array (Pearl/Pink/Purple) 5 b, 2021 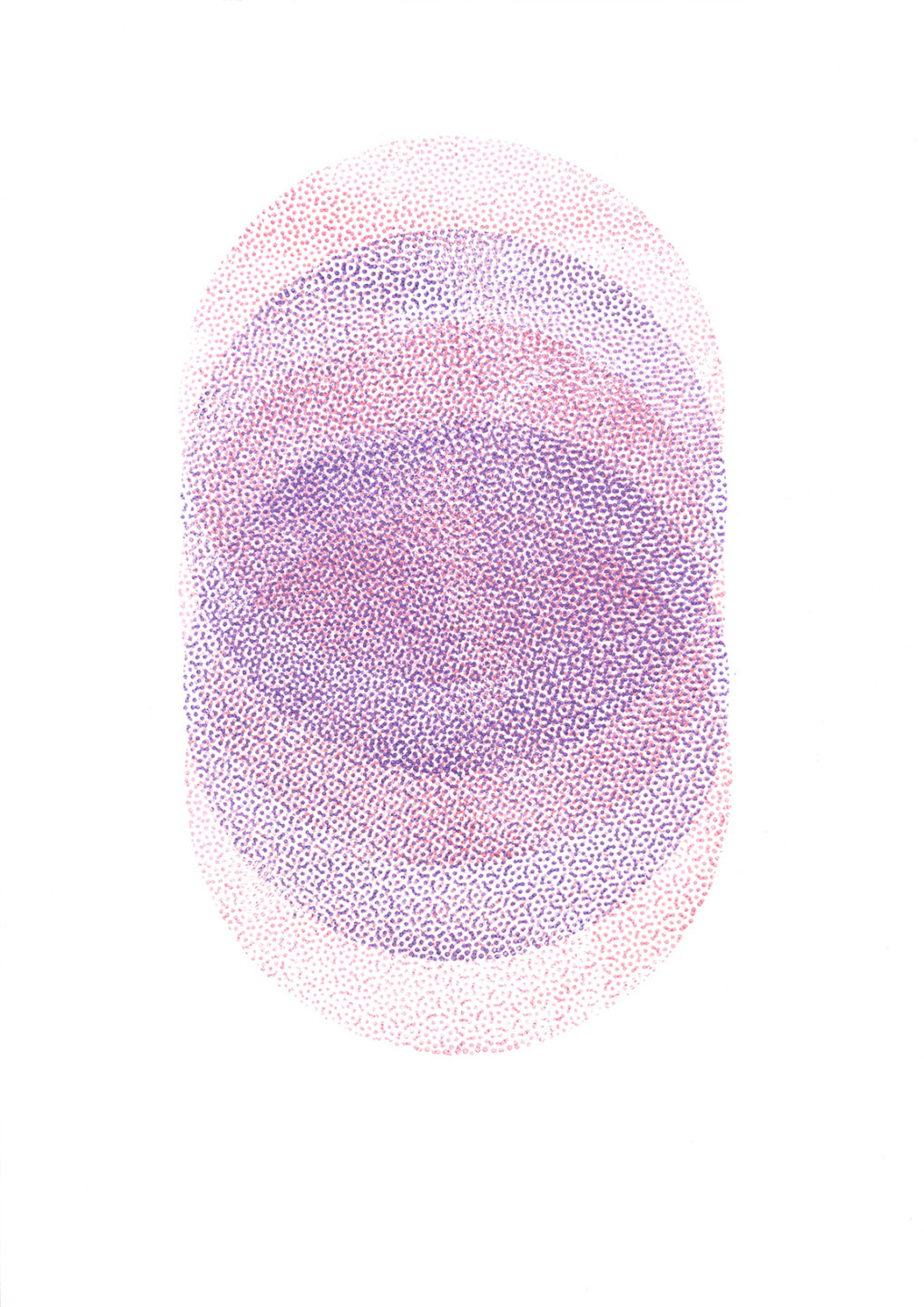 Conrad Shawcross, RA, was born in 1977 in London, where he currently lives and works. Recent major exhibitions and commissions include Escalations, a solo exhibition held at  Chateau La Coste, Provence, France, where the artist’s monumental new permanent commission Schism (Château La Coste) is on view; Pioneering Places, a major public art work for Ramsgate Royal Harbour, UK; and an exhibition to mark the 800th anniversary of Salisbury Cathedral, Wiltshire, UK.