‘With self-portraits, there are no feelings to hurt. I love it, it’s pure freedom…’ — Chantal Joffe

Victoria Miro is delighted to present a series of large-scale pastel self-portraits by Chantal Joffe.

Chantal Joffe brings a combination of insight and integrity, as well as psychological and emotional force, to the genre of figurative art. Defined by its clarity, honesty and empathetic warmth her work is attuned to our awareness as both observers and observed beings, apparently simple yet always questioning, complex and emotionally rich.

This exhibition premieres a number of large-scale pastel self-portraits. Self-portraiture is one of the cornerstones of Joffe’s art. It is one that, aside from issues of practicality, she considers ‘a way of thinking about time passing’ – in regard to herself and to her relationship with her heroes and forebears, not least Paula Modersohn-Becker who painted what is likely the first ever half-length naked self-portrait by a female artist.

These works, charting the topography of the artist’s body as she stands, bends, places her hands on the small of her back, shifts her weight on to one foot then the other, are especially searching. Often she seems to be looking down – studying her own form from different angles – just as the works themselves, not confined by the paper’s edge, range speculatively across multiple sheets. They are among the largest works on paper Joffe has made. Yet, whether intimate or monumental – and Joffe’s work is capable of being both at the same time – her self-portraits are always in pursuit of the truthfulness that she seeks in all her subjects. Here she applies it to herself, the advantage being, as she says, that ‘there is no obligation to the sitter.’ 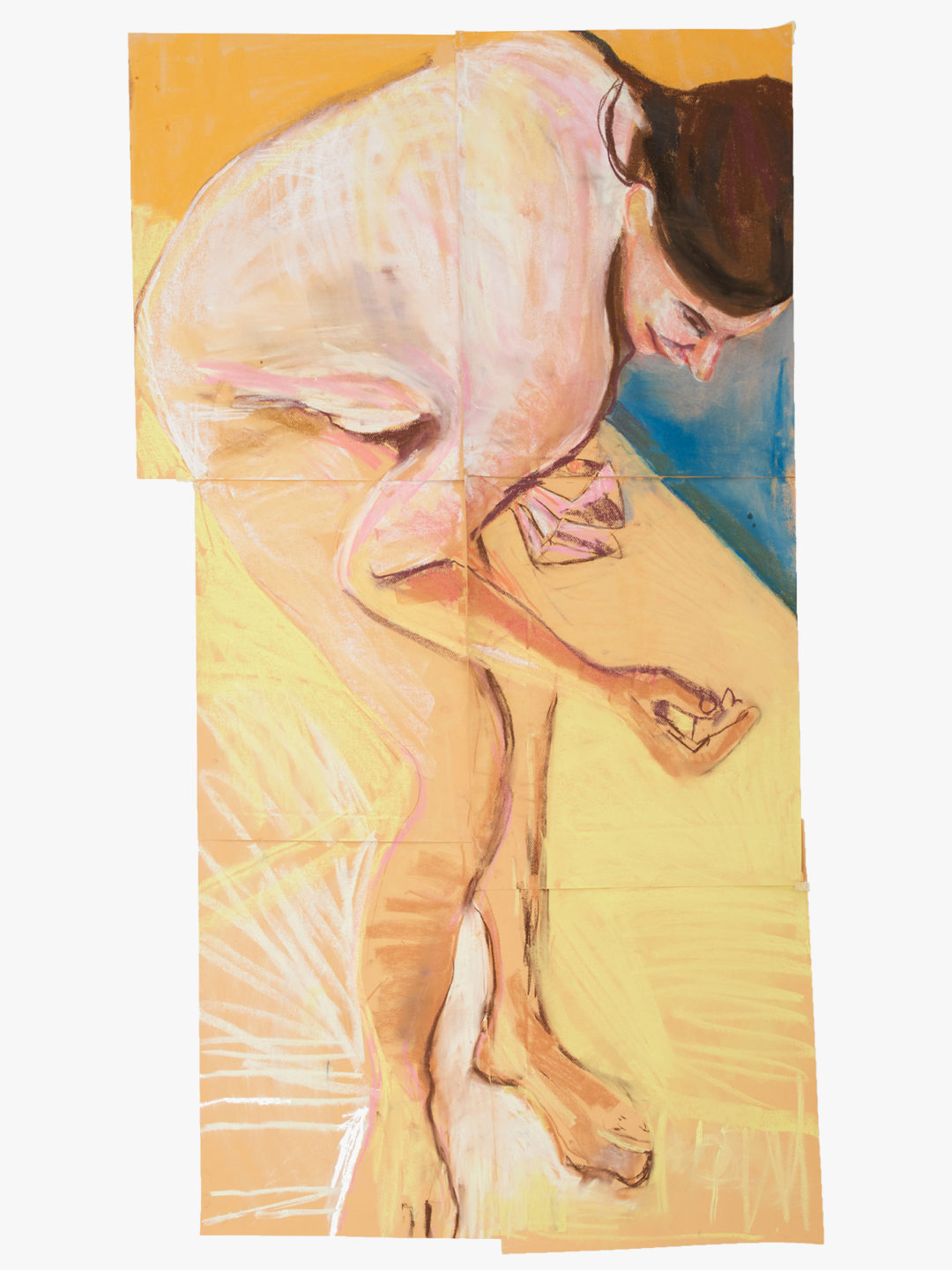 While drawing has always been integral to Joffe’s practice, the medium of pastel offers a number of unique challenges and opportunities as she brings images robustly and truthfully to life. The artist has discussed the engrossing and highly physical experience of the work’s making, with pastel accumulating with a luminous purity across multiple sheets of paper laid out on her studio table or floor, as being markedly different from the act of painting and the ways in which oil behaves on canvas or board. ‘You can get a kind of brutality with pastel that you can’t with paint,’ she explains. ‘With paint there’s always an extension of your arm and brush. Whereas pastel is so primitive. You can’t draw hard enough.’ 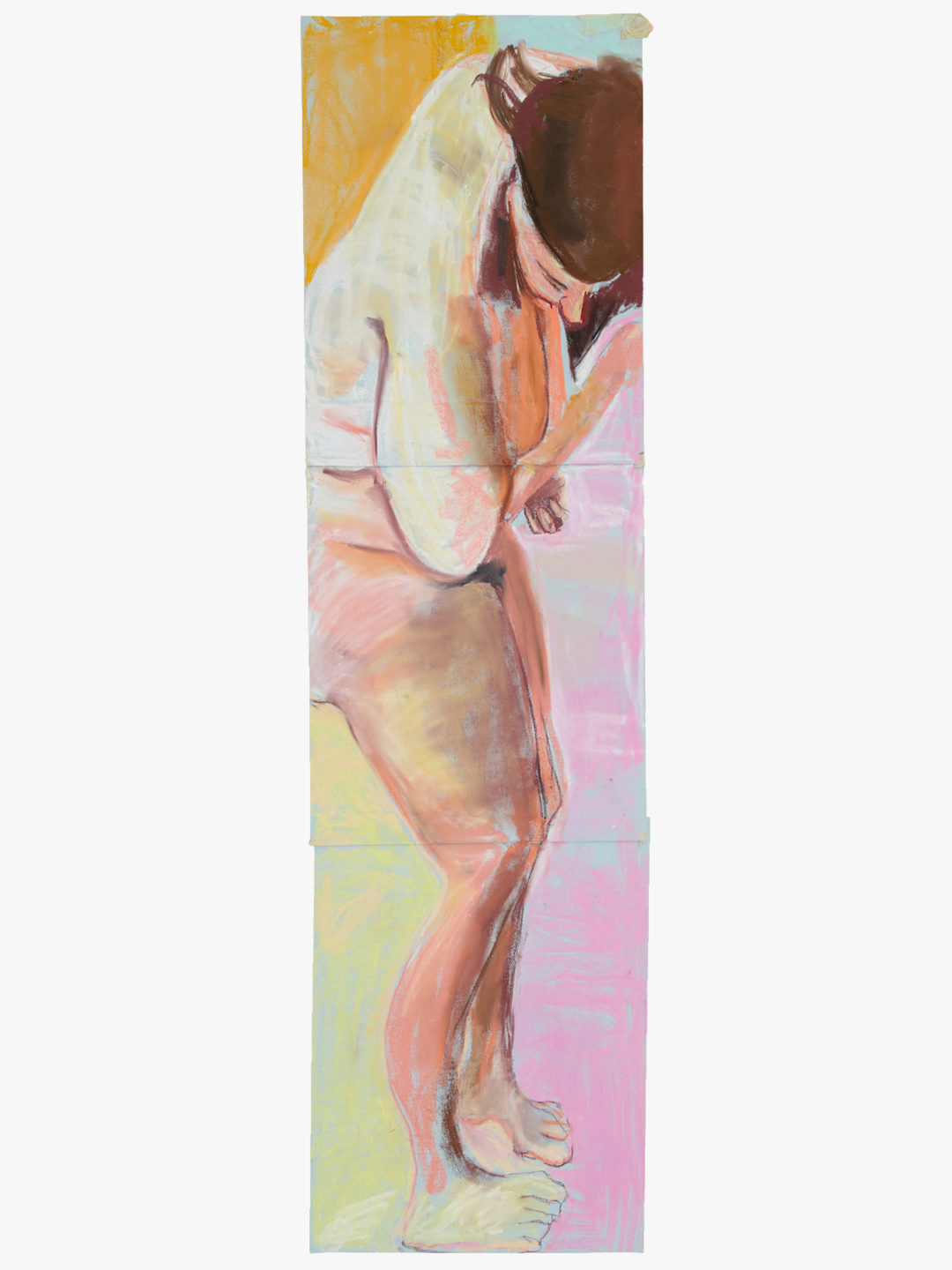 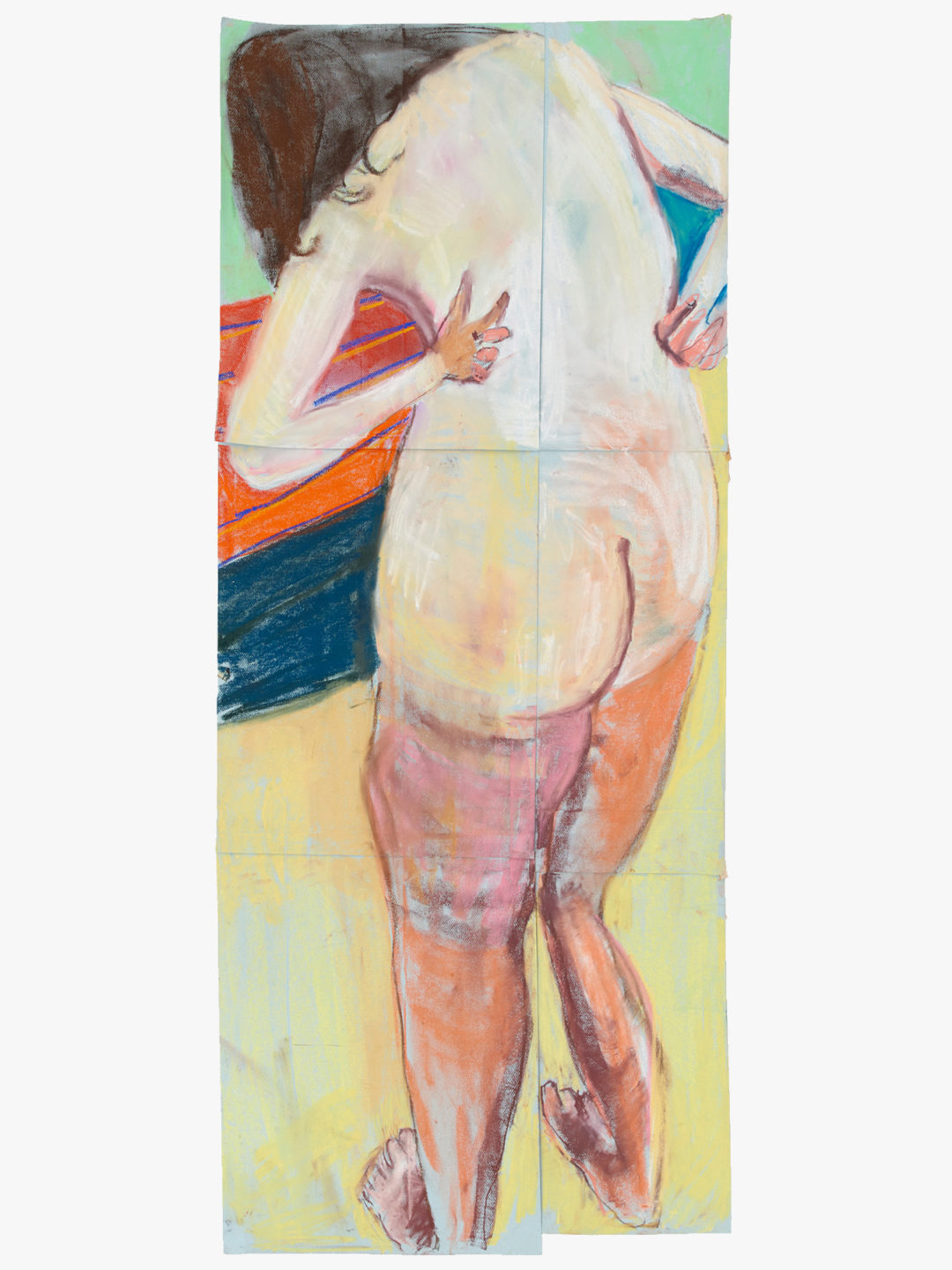 Chantal Joffe, Self Portrait from behind with Arms Bent Back, 2015

‘As both artist and model she holds all the cards and remains unflinching in her self-directed gaze.’— Dorothy Price

In these works, and a contemporaneous series of smaller pastels titled (After Degas), Joffe’s poses refer to those depicted by Edgar Degas in his famed drawings of nude bathers. Writing in the catalogue of the exhibition Chantal Joffe: For Esme – with Love and Squalor, recently on view at Arnolfini, Bristol, Dorothy Price comments that Joffe’s pastels ‘reimagine the contorted poses of Degas’ nude bathers: leaning forward to pull up stockings, scratching her back, standing one moment, crouching the next, seen from behind awkwardly cupping her nakedness, or more boldly and self-absorbedly looking up, past the viewer, hands on hips. Her ability to both admire Degas’ draughtsmanship and empathise with the women whom he paints is subtly but insistently invoked… Whilst Degas’ pastels have been the subject of much critical and art historical controversy, not least accusations of misogyny levelled at the artist for the strenuous poses he expected naked models to hold intermittently for hours at a time in an unheated studio, Joffe’s works completely disrupt this visual paradigm. As both artist and model she holds all the cards and remains unflinching in her self-directed gaze.’ 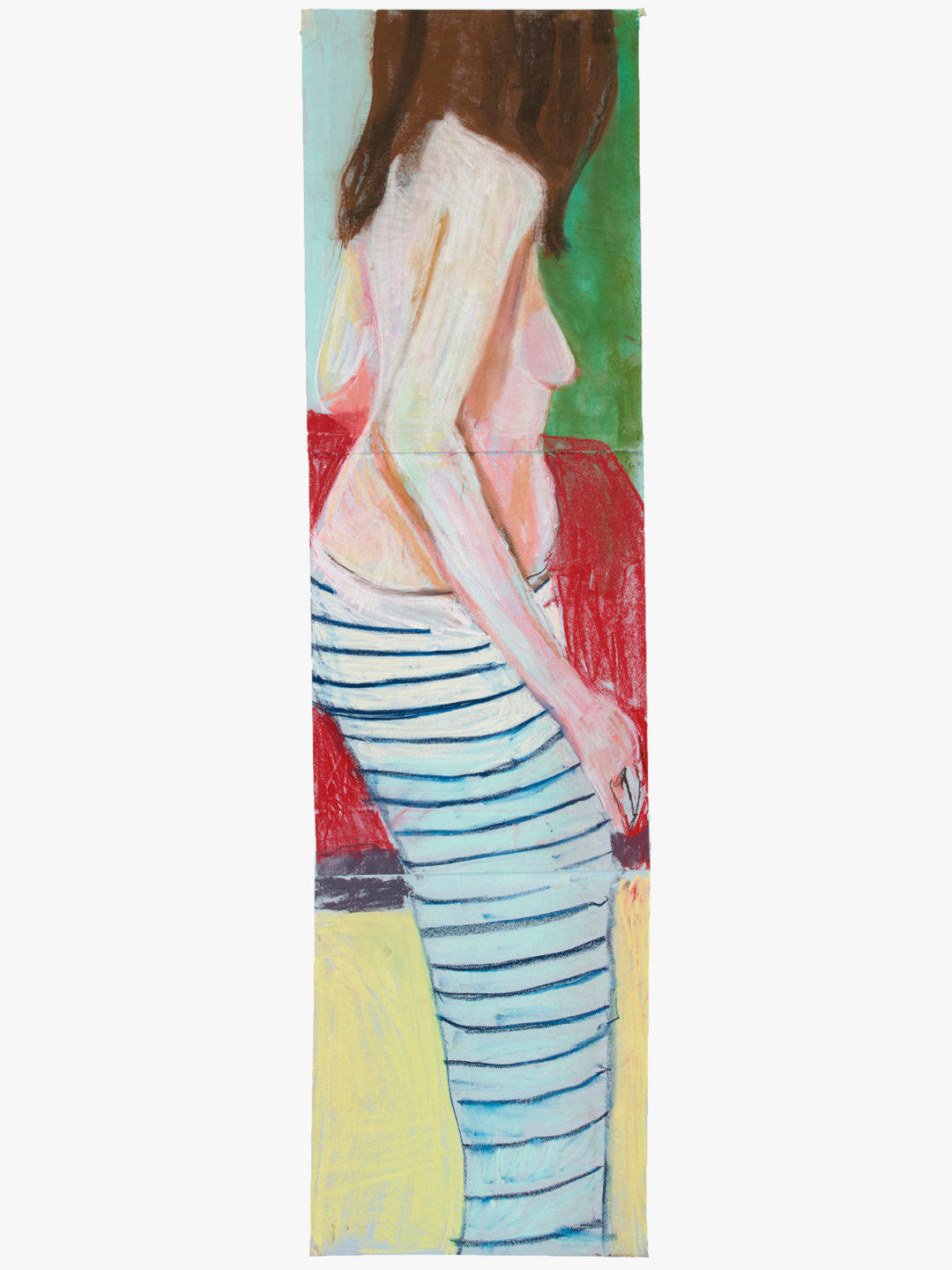 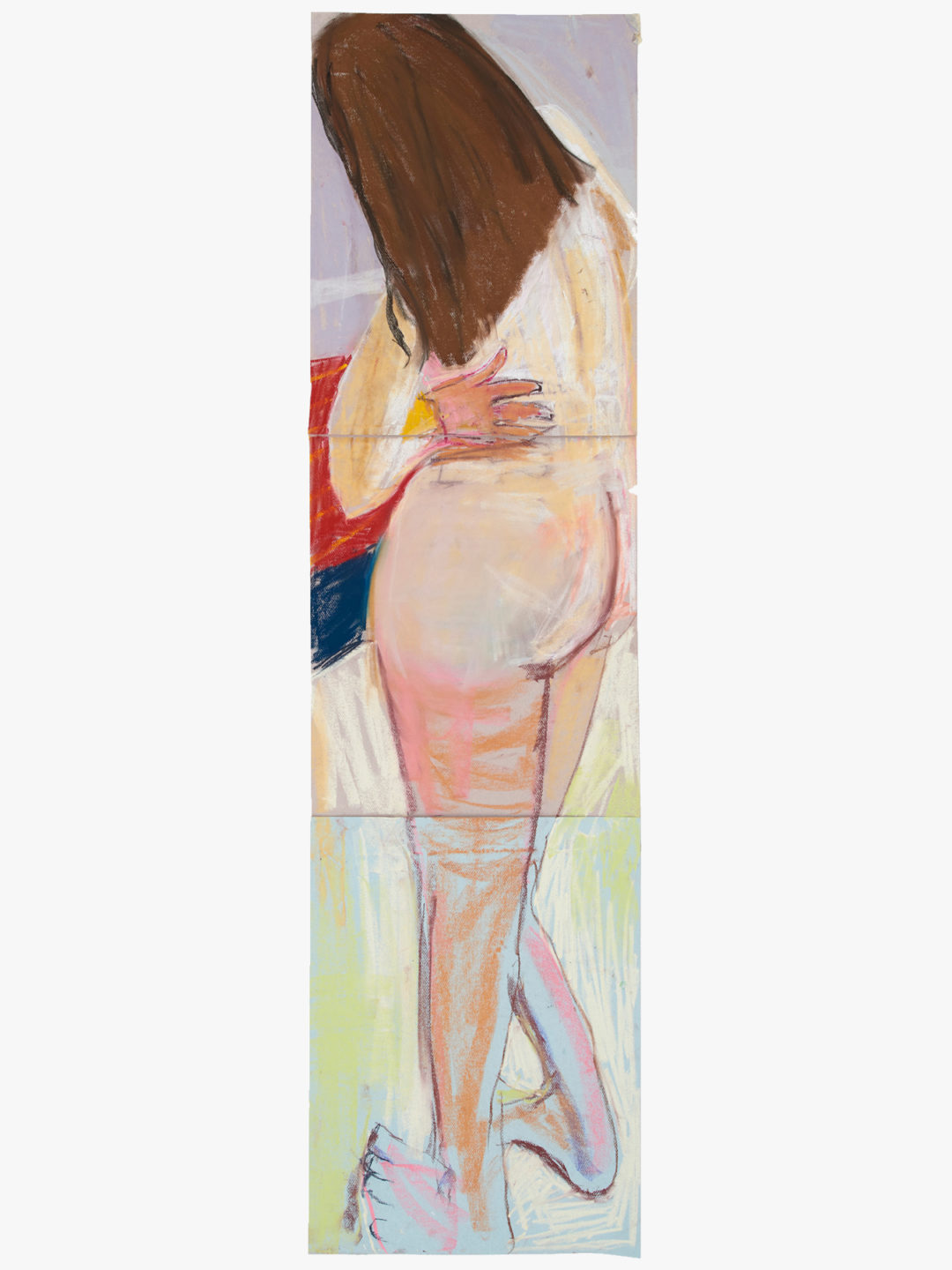 Chantal Joffe, Self Portrait from Behind with Hand on Hip, 2015 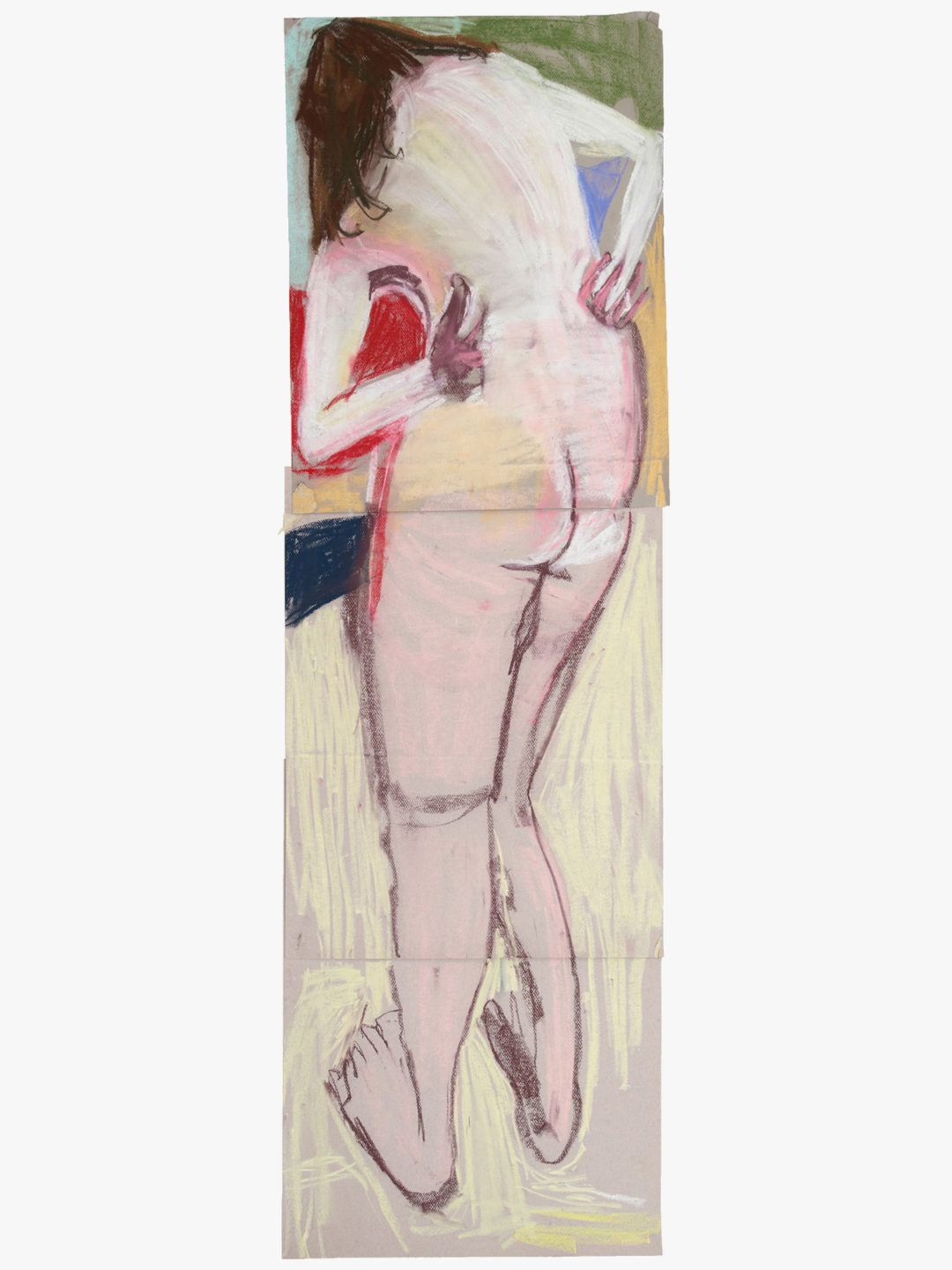 Chantal Joffe, Self Portrait from Behind with Arms Bent Back II, 2015

Born in 1969, Chantal Joffe lives and works in London. The acclaimed British painter has exhibited nationally and internationally with venues including Royal Academy of Arts, London; Whitechapel Gallery, London; Jewish Museum, New York; Scottish National Gallery of Modern Art, Edinburgh; and Neuberger Museum of Art, New York. Her work is in numerous institutional and private collections, including the Institute of Contemporary Art, Boston; Detroit Institute of Arts; National Portrait Gallery, London; and The Metropolitan Museum of Art, New York. Joffe will create a major new public work for the Elizabeth line station at Whitechapel, London, which will be on view when the Crossrail station opens in 2021. The exhibition Chantal Joffe: For Esme – with Love and Squalor was recently on view at Arnolfini, Bristol. The exhibition Chantal Joffe: Story, featuring a number of paintings of the artist’s mother and focusing on the complex relationship between mother and child over time, will take place at Victoria Miro in January 2021 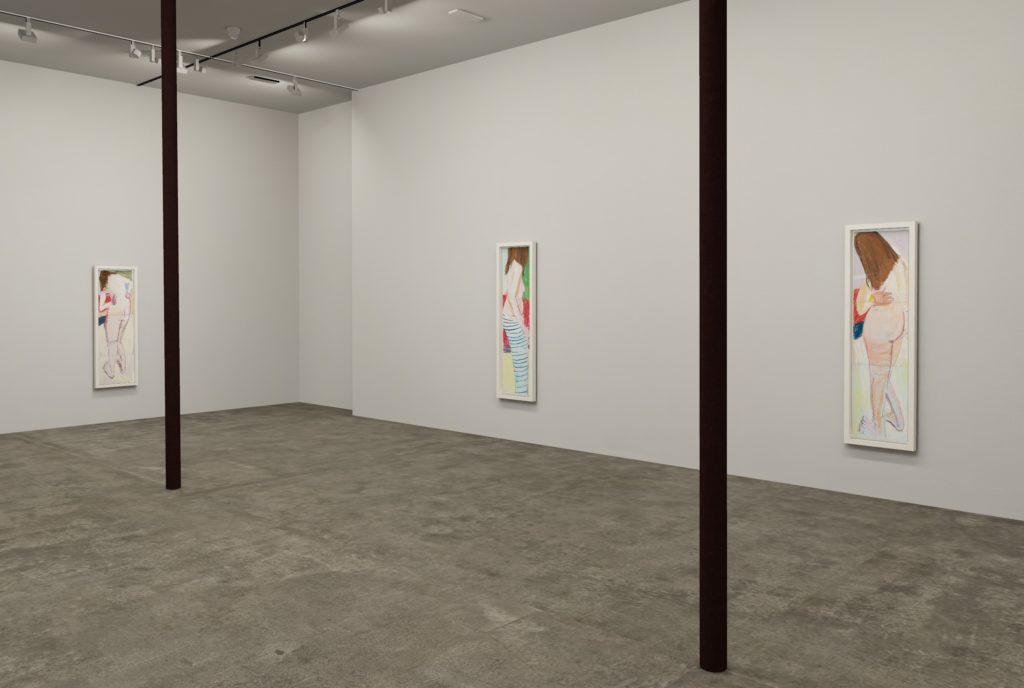 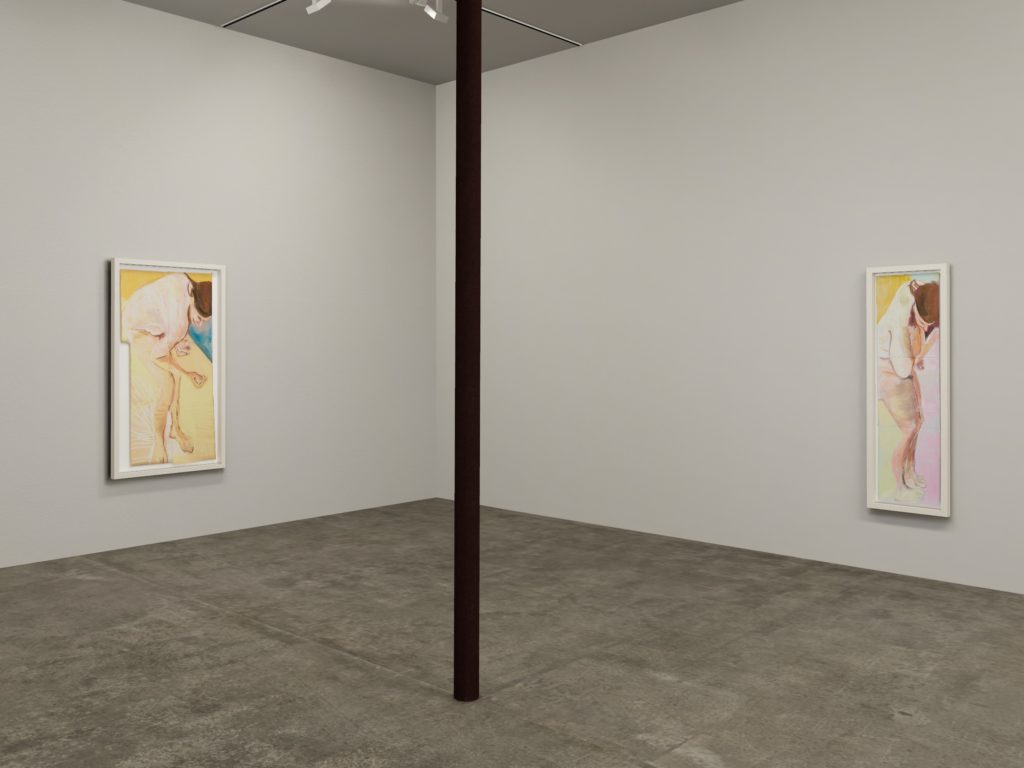 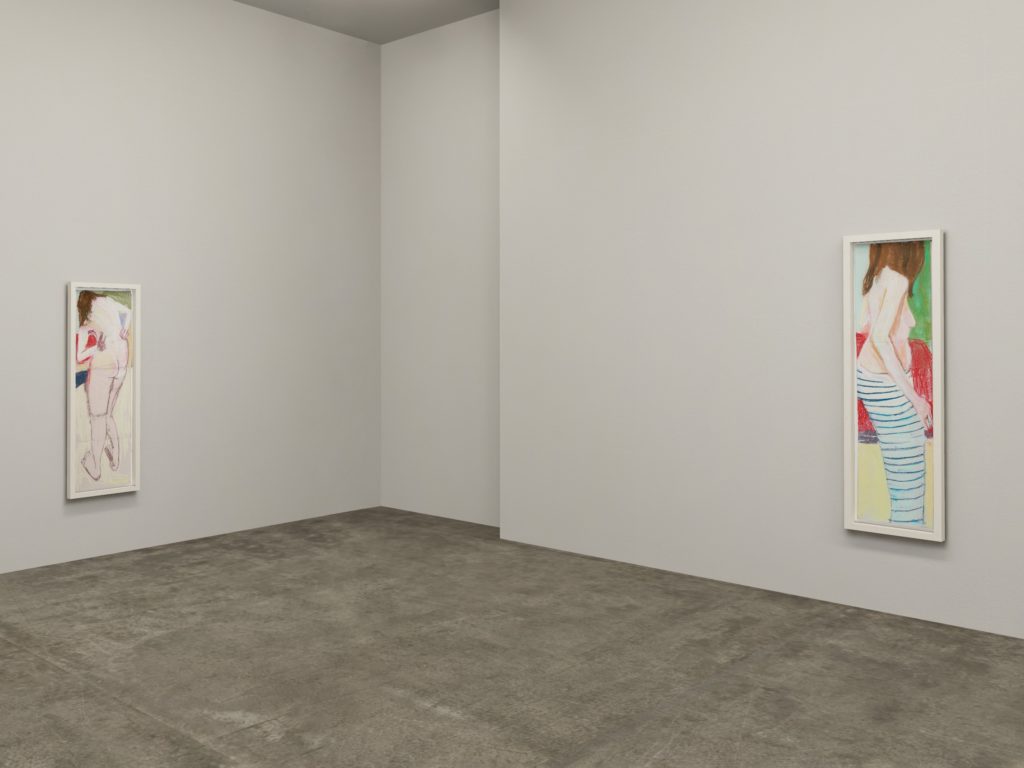 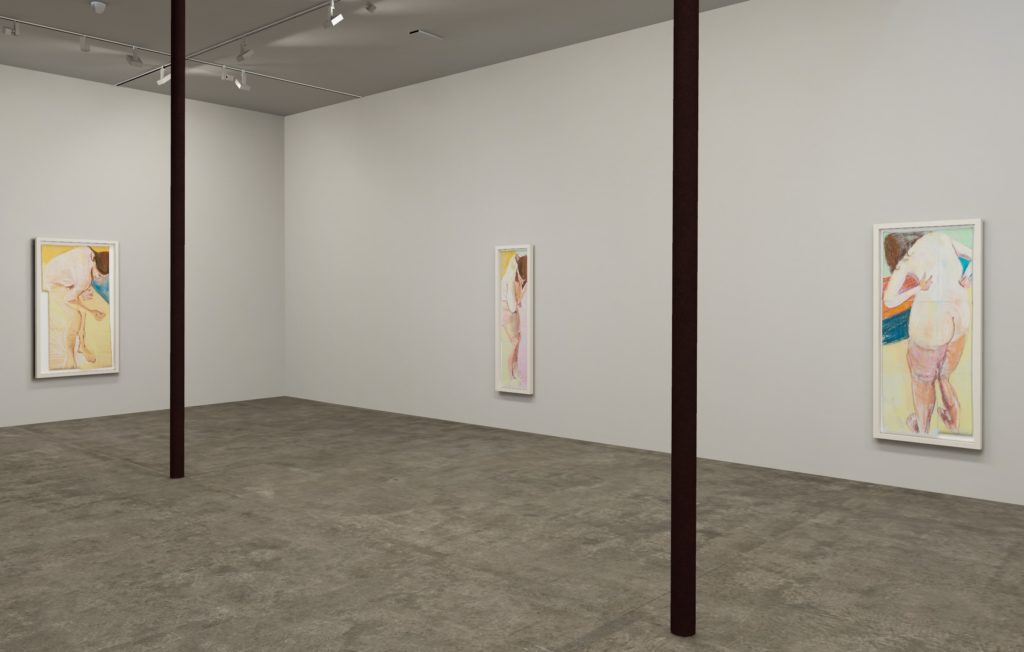 Vortic is the leading extended reality (XR) platform for the art world. Created in response to the unique demands of today’s art market the platform consists of three different tools for galleries and collectors. Galleries use Vortic Curate, a back-end content management system, to create publicly accessible virtual exhibitions, private views and art fair booths on Vortic’s two apps – Vortic Collect and Vortic VR. Using the latest 3-D scanning technology, galleries are able to stage exhibitions in a photogrammetrically captured replica of their gallery space or in a choice of fully customisable generic gallery spaces. Collectors can also use the Vortic Collect app to view how artworks would look in-situ and to scale in their homes using augmented reality (AR).

The Vortic Collect app is available to download from the App Store now. Learn more about Vortic here.