Victoria Miro is delighted to present There’s Still Another I See, an exhibition that focuses for the first time on pairings of Alice Neel’s paintings of the same sitter.

‘When he came in the door the fourth time he looked different… And do you know, there’s still another I see. I could paint him again.’ – Alice Neel*

Among the foremost painters of the twentieth century, Alice Neel’s reputation has only ascended further during recent years, with landmark exhibitions such as the acclaimed 2021–2022 touring survey Alice Neel: People Come First, organised by The Metropolitan Museum of Art in association with the Guggenheim Museum Bilbao and The Fine Arts Museums of San Francisco.

Throughout her life, Neel (1900–1984) developed a unique talent for identifying particular gestures and mannerisms that reveal the singular identities of her sitters. Yet, she was also acutely aware of changes within an individual in spirit and in flesh, and how these changes might reveal themselves over minutes, days or decades. The above quote, in which Neel describes her experience of painting the poet Frank O’Hara, gives a sense of what compelled her to look at and paint people more than once, and by extension to know as much as possible about the people and the world around her.

This exhibition, the first of its kind, focuses on pairings of paintings by Neel of the same sitter, sometimes completed only a year or two apart, sometimes decades apart. With works ranging in date from the 1930s to the 1980s, it charts physical transformations over time, changes of mood, temperature or temperament – in sitter and artist – along with developments in Neel’s art, which grew ever more penetrating and succinct. Neel said, ‘If I hadn’t been an artist, I could have been a psychiatrist.’ In presenting Neel’s paintings of the same subject, There’s Still Another I See invites consideration of her desire and motivation to look and paint again, in addition to the constancy of her vision and the unwavering visual and emotional intelligence she applied to others.

The exhibition is accompanied by a publication featuring new scholarship by art historian Minna Moore Ede that draws connections between Neel’s art and that of Old Masters such as Francisco Goya, whom Neel greatly admired, underlining the art historical grounding of her radical vision and affirming her place in the pantheon.

* the artist in conversation with Ted Berrigan, published in ARTnews, January 1966 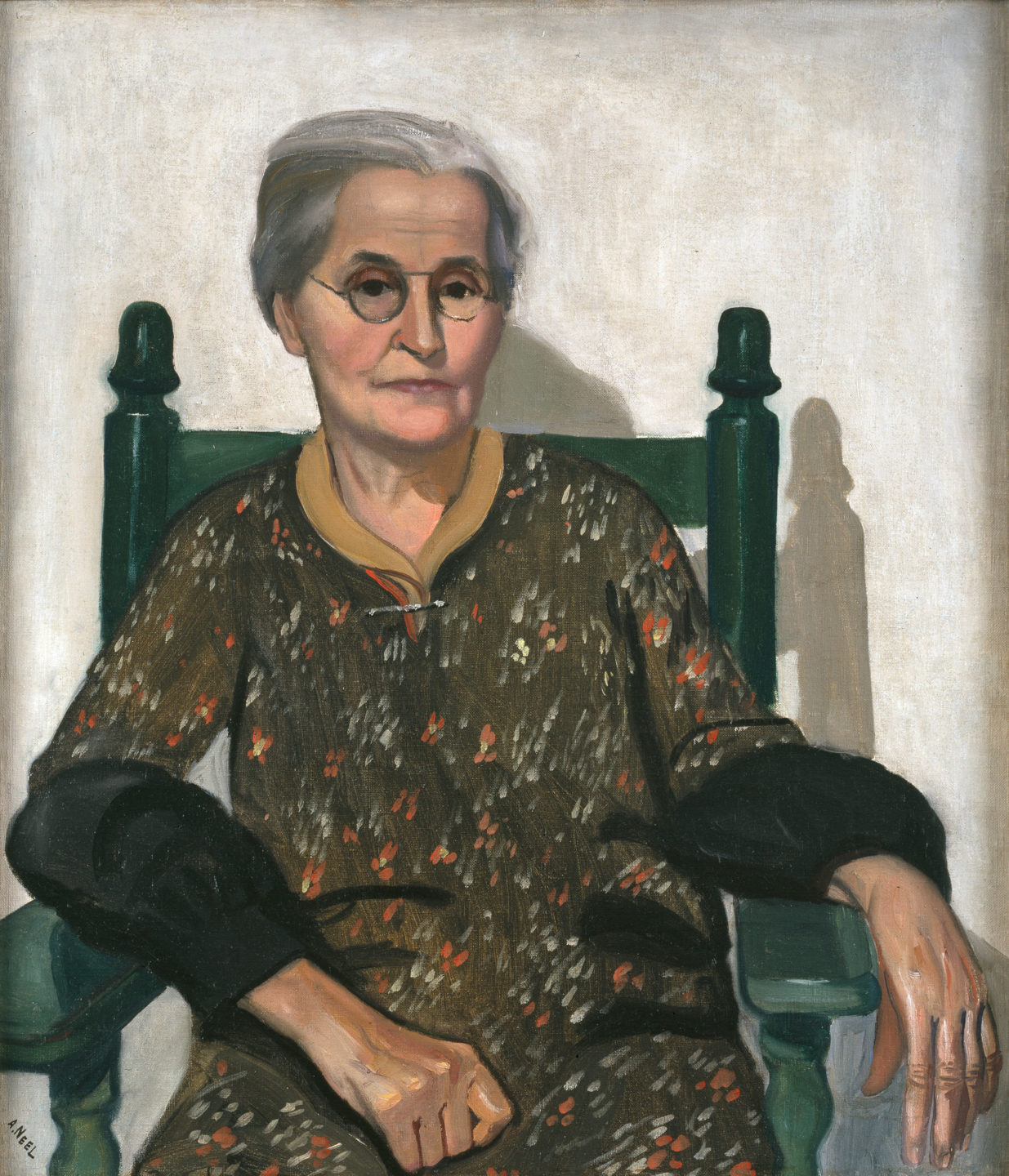 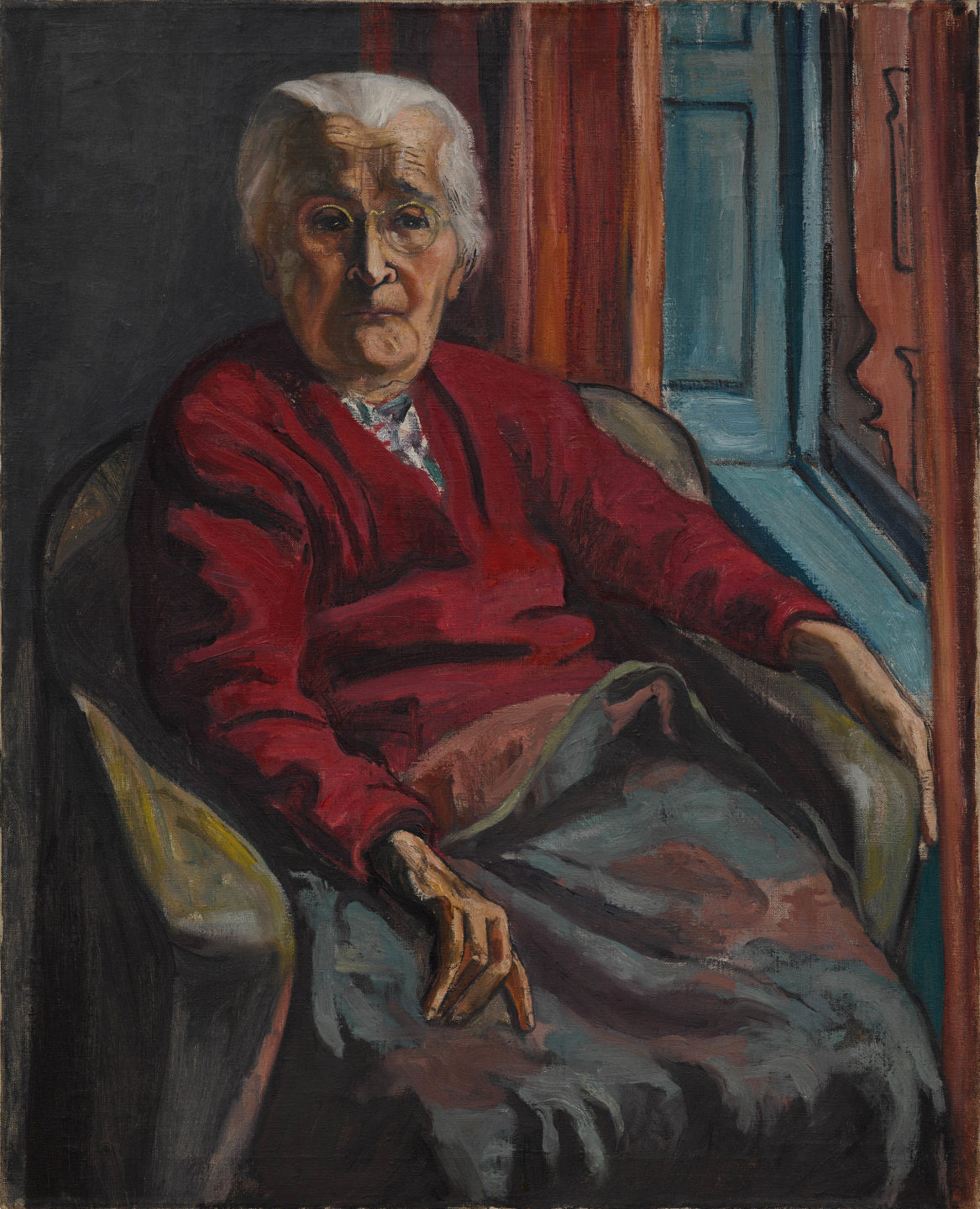 ‘I liked to watch my mother’s face… It had dominion over me.’ — Alice Neel*

Neel completed just four paintings of her mother, Alice Concross Hartley Neel (1868–1954), two of which are on view: My Mother, 1930; and My Mother, 1952. Painted 22 years apart, they reveal a strong empathy for the changes in body and mind that accompany old age. Yet, just as striking is an unusual dynamic – that of the artist looking and, just as powerfully, being looked at by her subject. Neel said that it was through the expression of her mother’s face that she judged her own actions; as she explained to art critic Judith Higgins ‘My psychiatrist told me I got interested in painting portraits because I liked to watch my mother’s face… It had dominion over me. Since she was so unpredictable, he thought I watched her face to see whether she approved of things or not.’ * 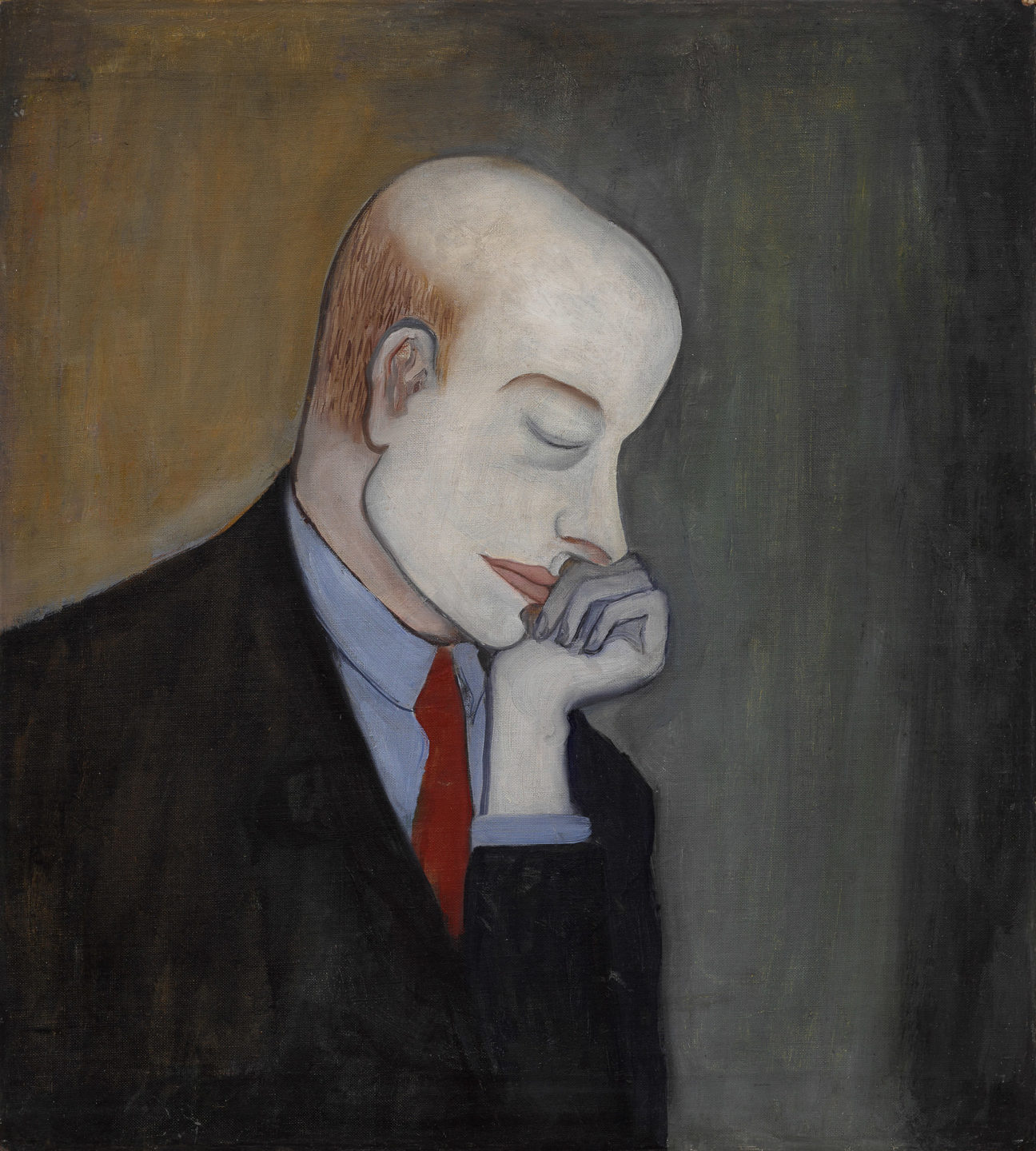 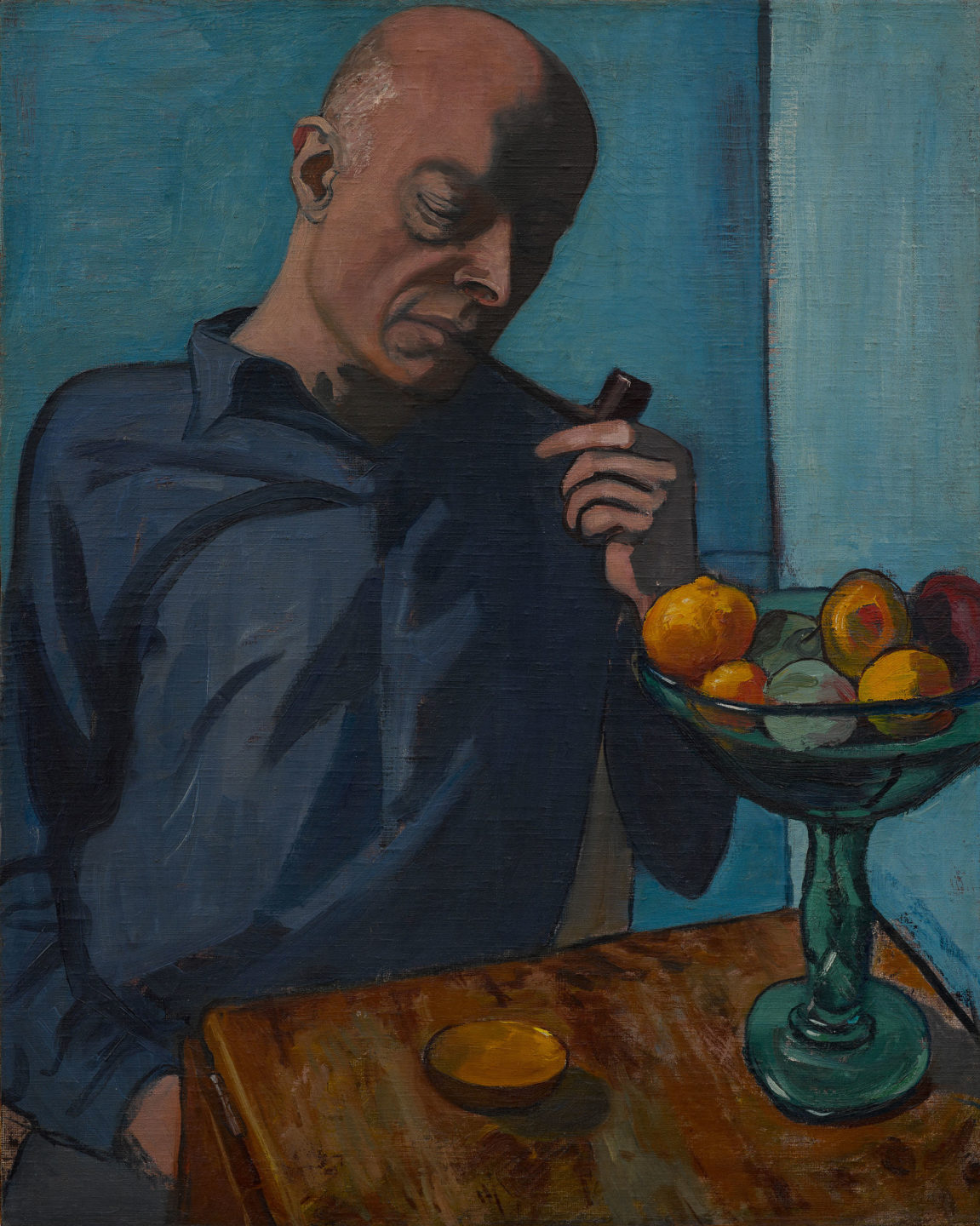 Neel first met John Rothschild, a Harvard-educated businessman, at the Washington Square Park annual outdoor exhibition in 1932, where she was exhibiting, and they remained loyal friends until his death in 1975. A dreamlike atmosphere pervades Neel’s 1933 painting of him, while John with Bowl of Fruit, painted in 1949, has an air of calm as well as contemplation that seems to speak to the ease of friendship. 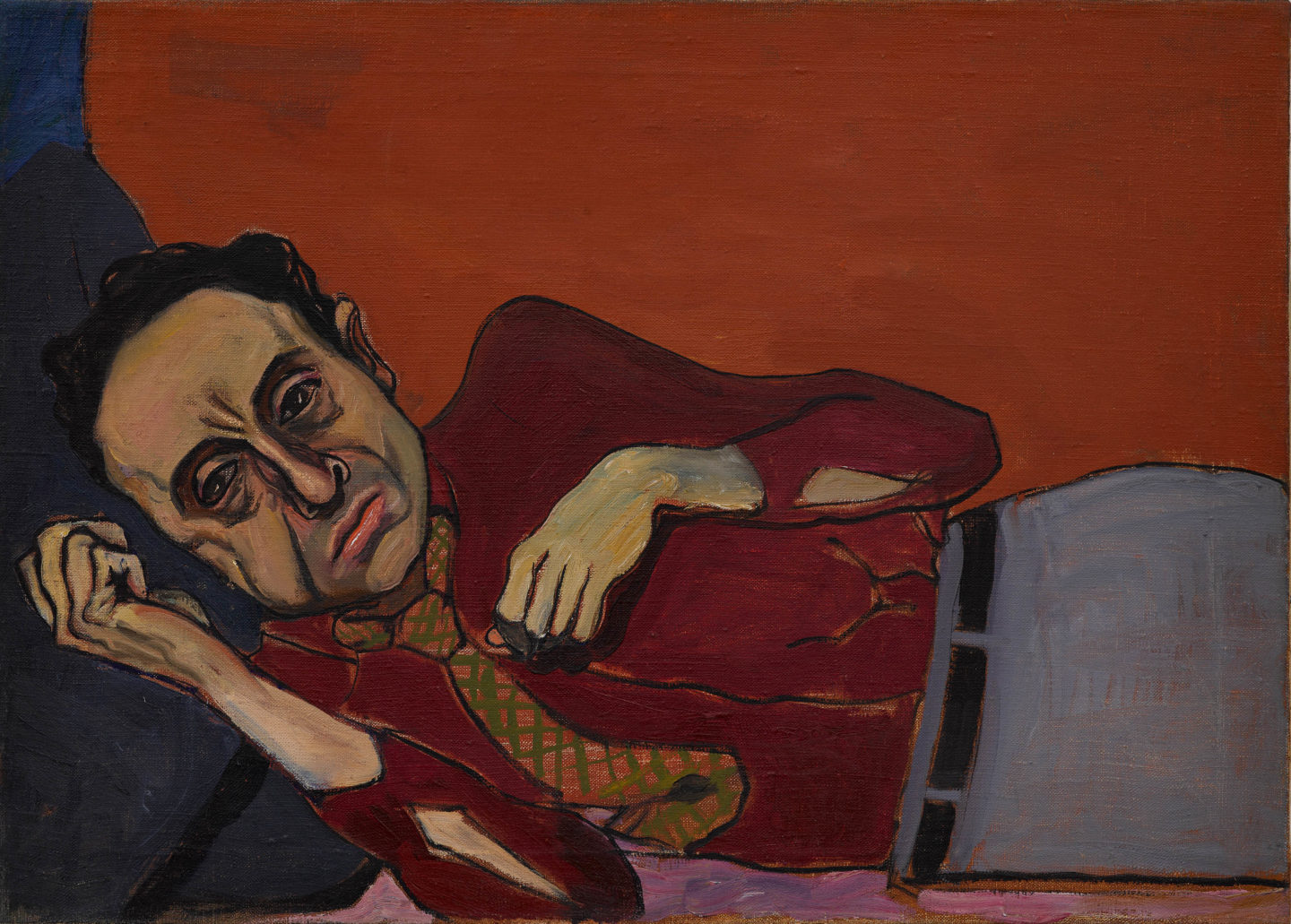 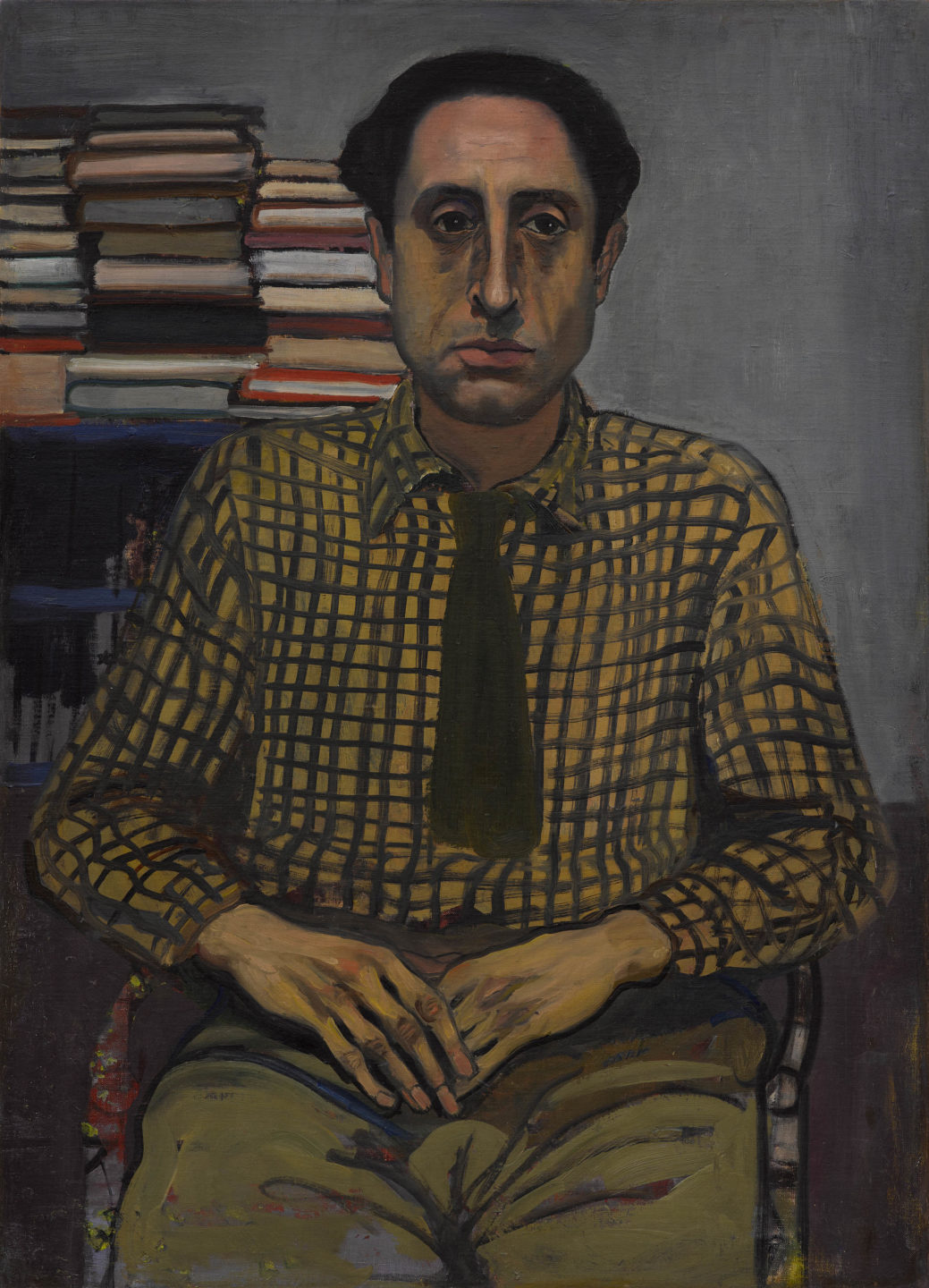 ‘…it is the pose of a man who at this moment in time cannot face the world.’ — Minna Moore Ede

Neel met Sam Brody, a documentary filmmaker, film critic and photographer, in 1940; their son, Hartley, was born the following year. Writing about the two paintings of Brody on view, Minna Moore Ede comments, ‘although their relationship was turbulent, it was the longest romantic attachment of Neel’s life. [In Sam Reclining, 1941] his fists are clenched tightly and his arms are held against his body… it is the pose of a man who at this moment in time cannot face the world. In her later, larger version of Sam in Checkered Shirt… Neel’s choice of a dark, heavy palette overall, full of shadows, speaks of a morose, heavy mood between artist and sitter.’ 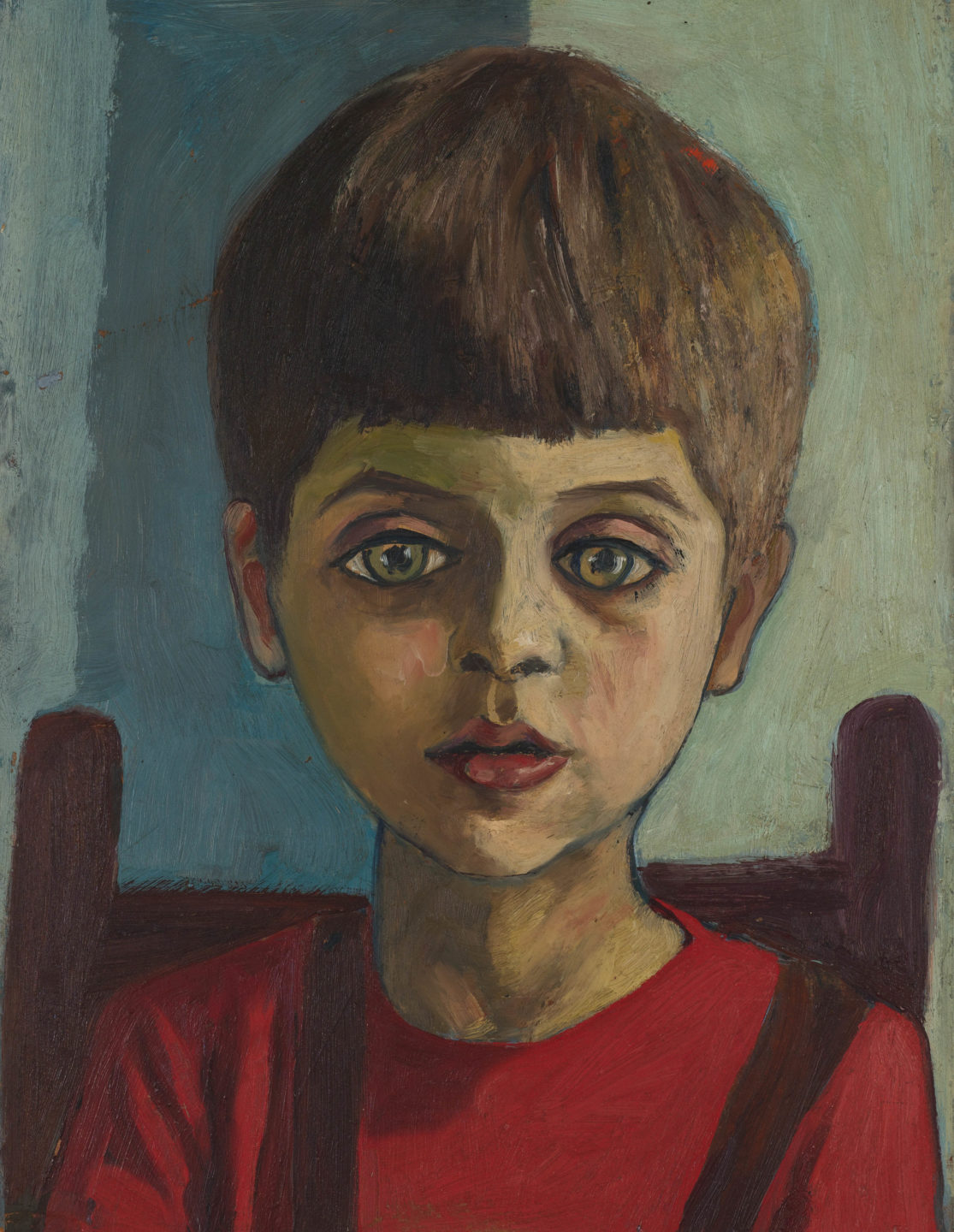 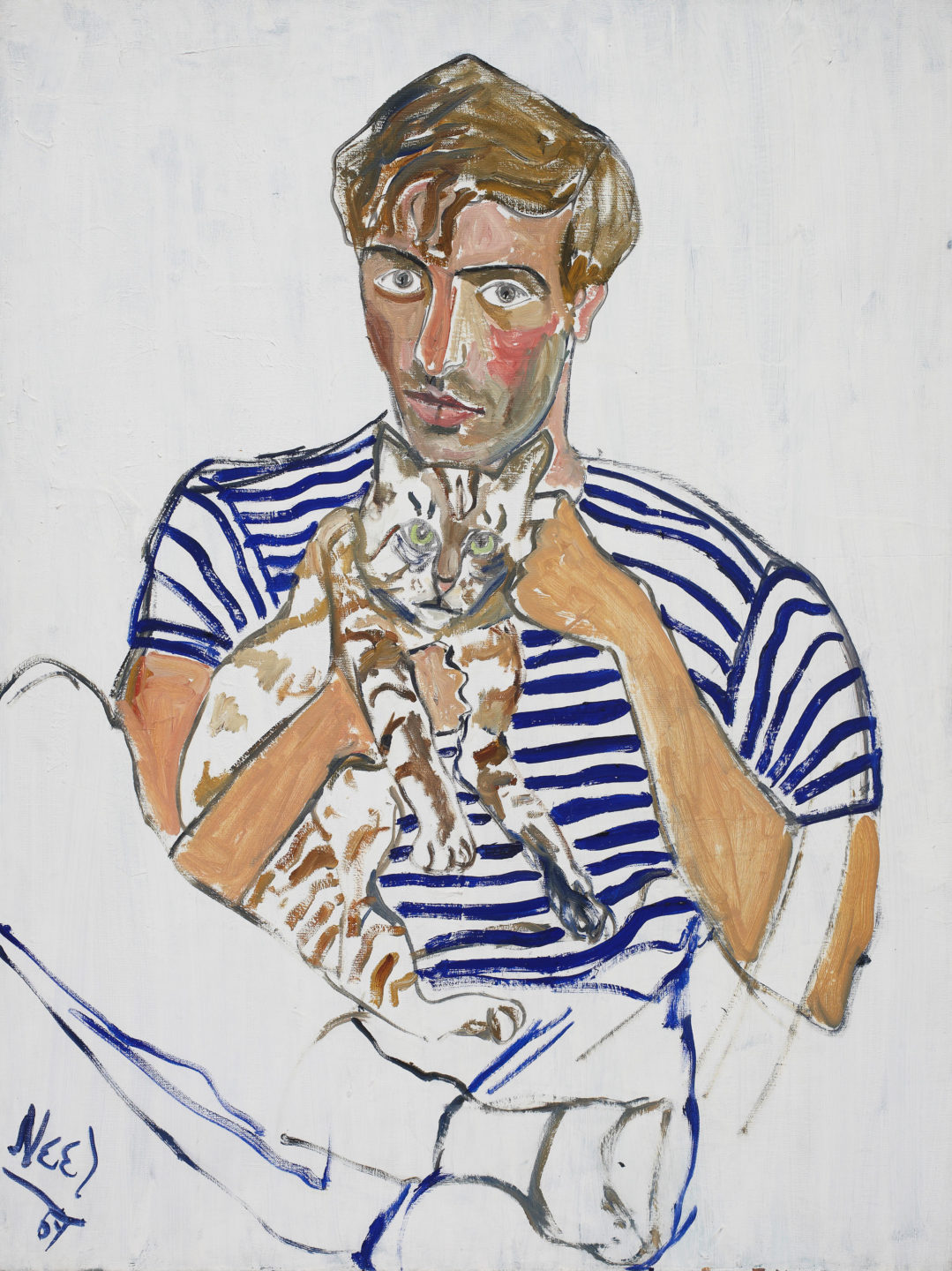 Paintings of Neel’s younger son, Hartley – a tender portrayal as a child of around six years-old and a more loosely-defined depiction as a man in his late-twenties cradling a cat – reveal the distillation of form and economy of line that occurred in her painting between the 1940s and the 1960s. 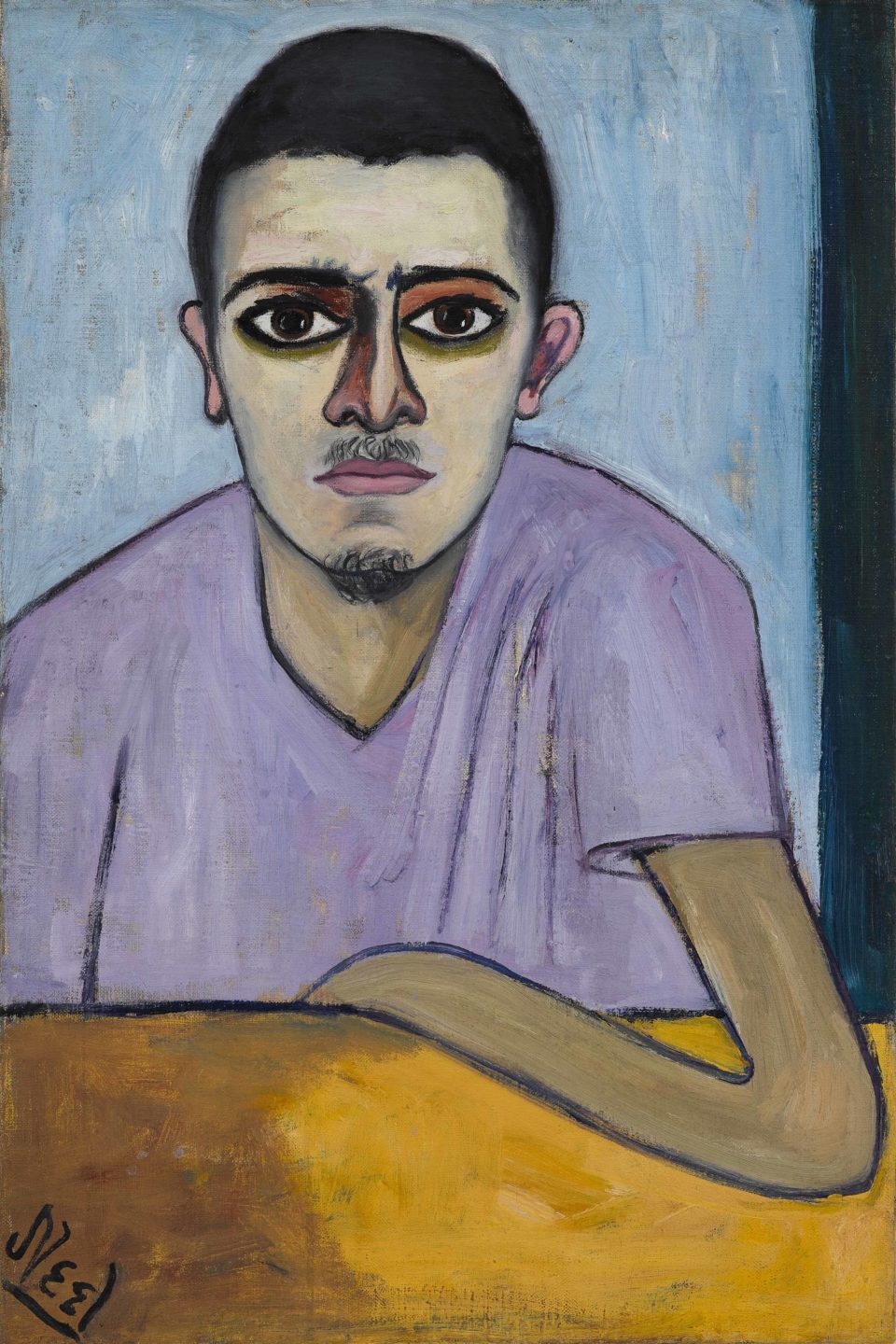 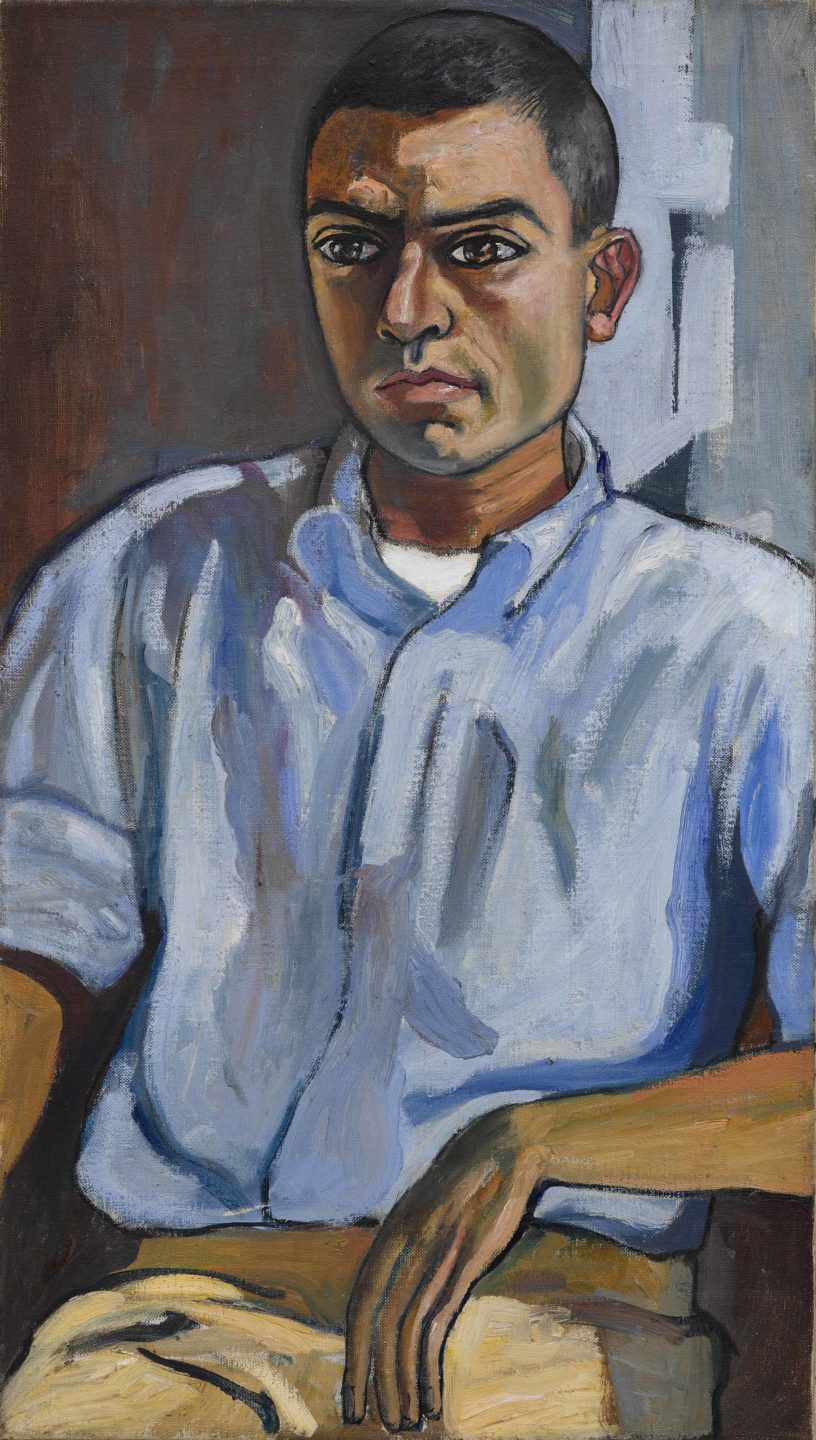 ‘In Neel’s arresting second image of Brody, the freshness of youth has been replaced by a more introspective demeanour…’ — Minna Moore Ede

Julian Brody was the child of Sam Brody’s first marriage. Minna Moore Ede comments, ‘Neel’s image of Julian aged 20 focuses on the intensity and directness of this young man’s face and gaze… In Neel’s arresting second image of Brody, the freshness of youth has been replaced by a more introspective demeanour… He is only five years older and yet Neel presents him at a new stage of life, conventionally dressed and absorbed in thought.’ 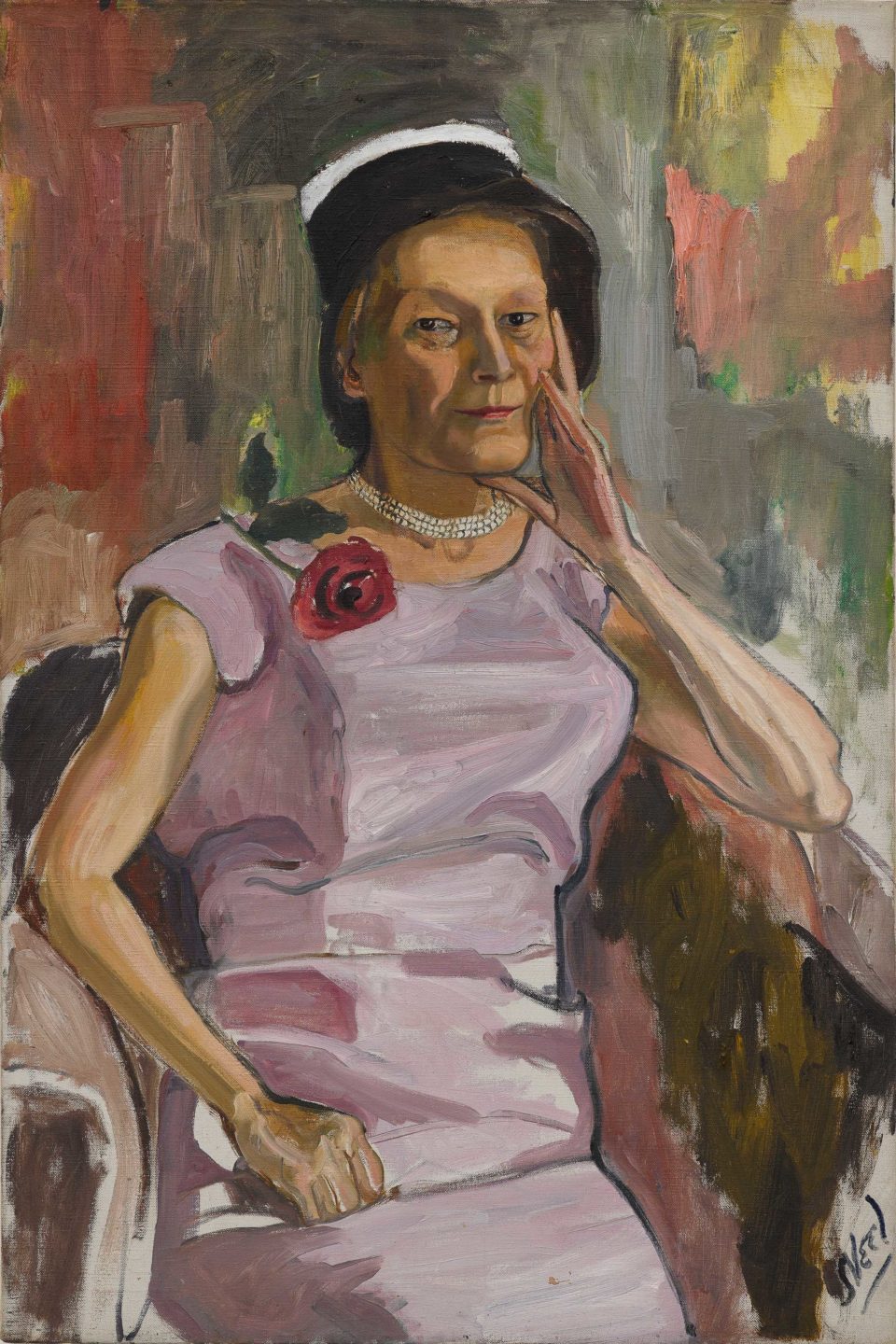 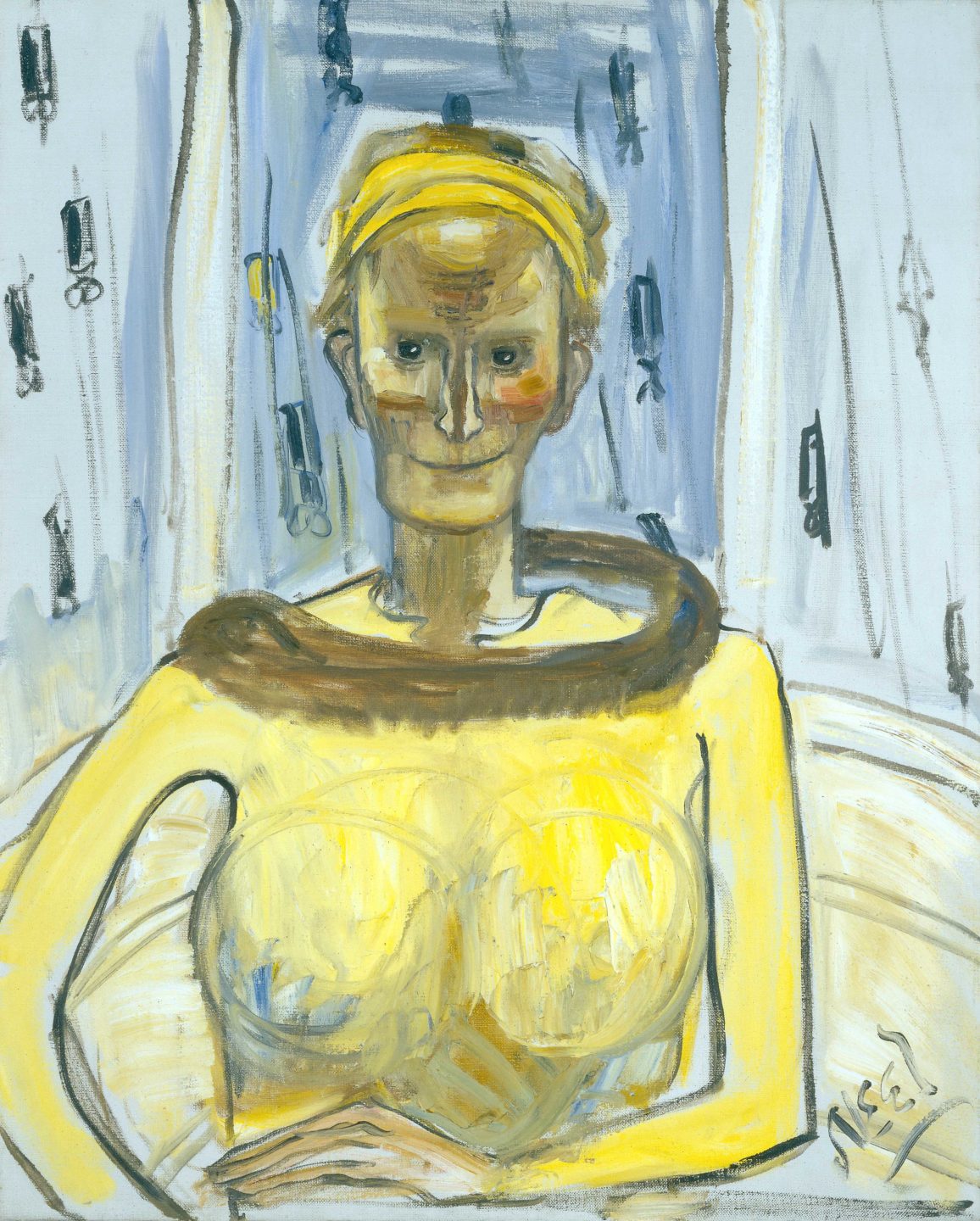 Ellie Poindexter was a New York gallerist who Neel painted twice in quick succession. Keen to cultivate a professional relationship, Neel made a flattering first depiction in which Poindexter wears a lilac dress with a rose corsage. The second, painted from memory after a disappointing encounter, demonstrates in no small measure Neel’s ability to convey her psychological impressions of her subject. Colour and personal detail were instrumental signifiers for Neel, and here, Poindexter becomes as she existed in Neel’s mind – a rather brittle figure with breasts protruding pneumatically within her yellow dress, a fox fur slung around her neck. 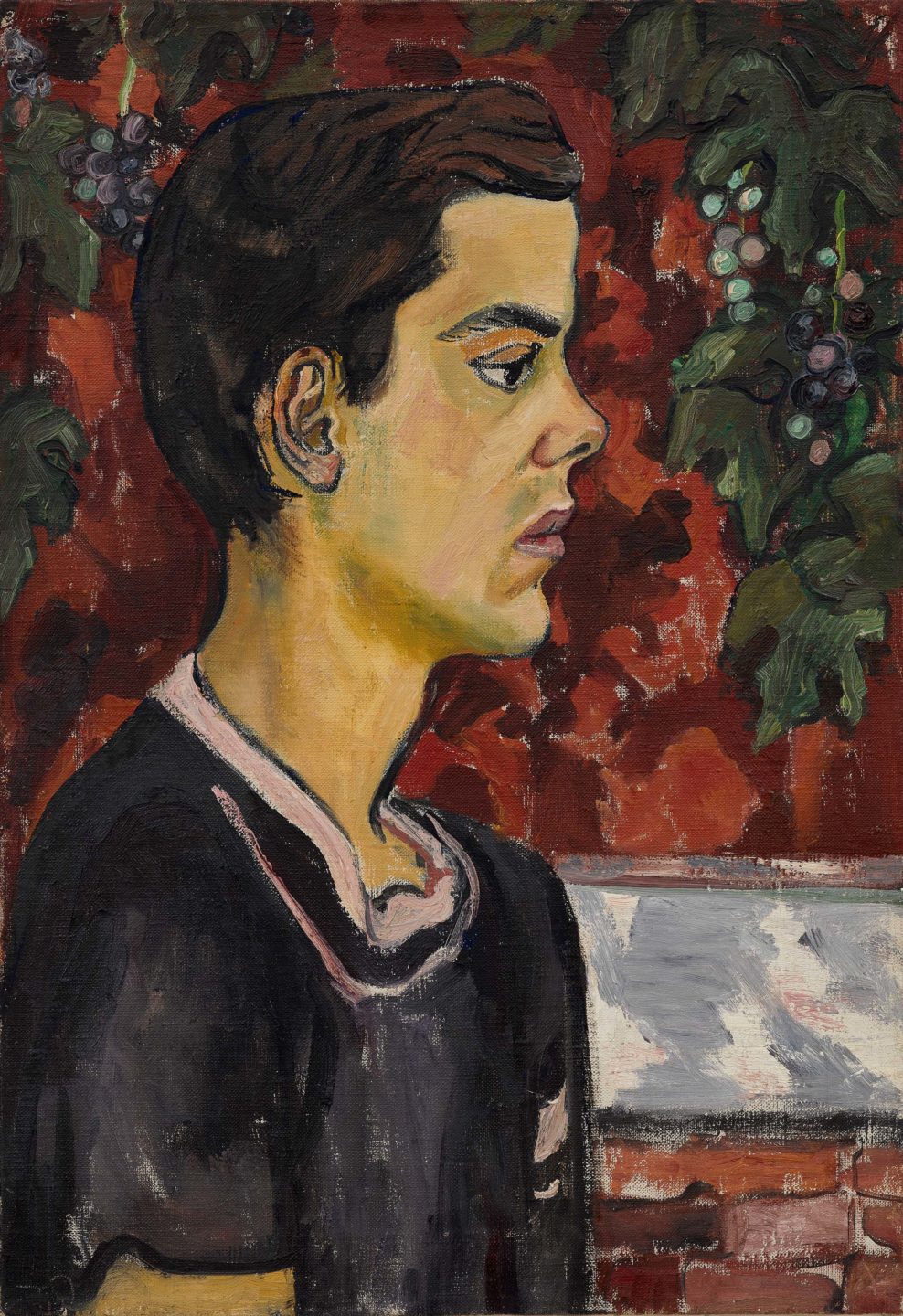 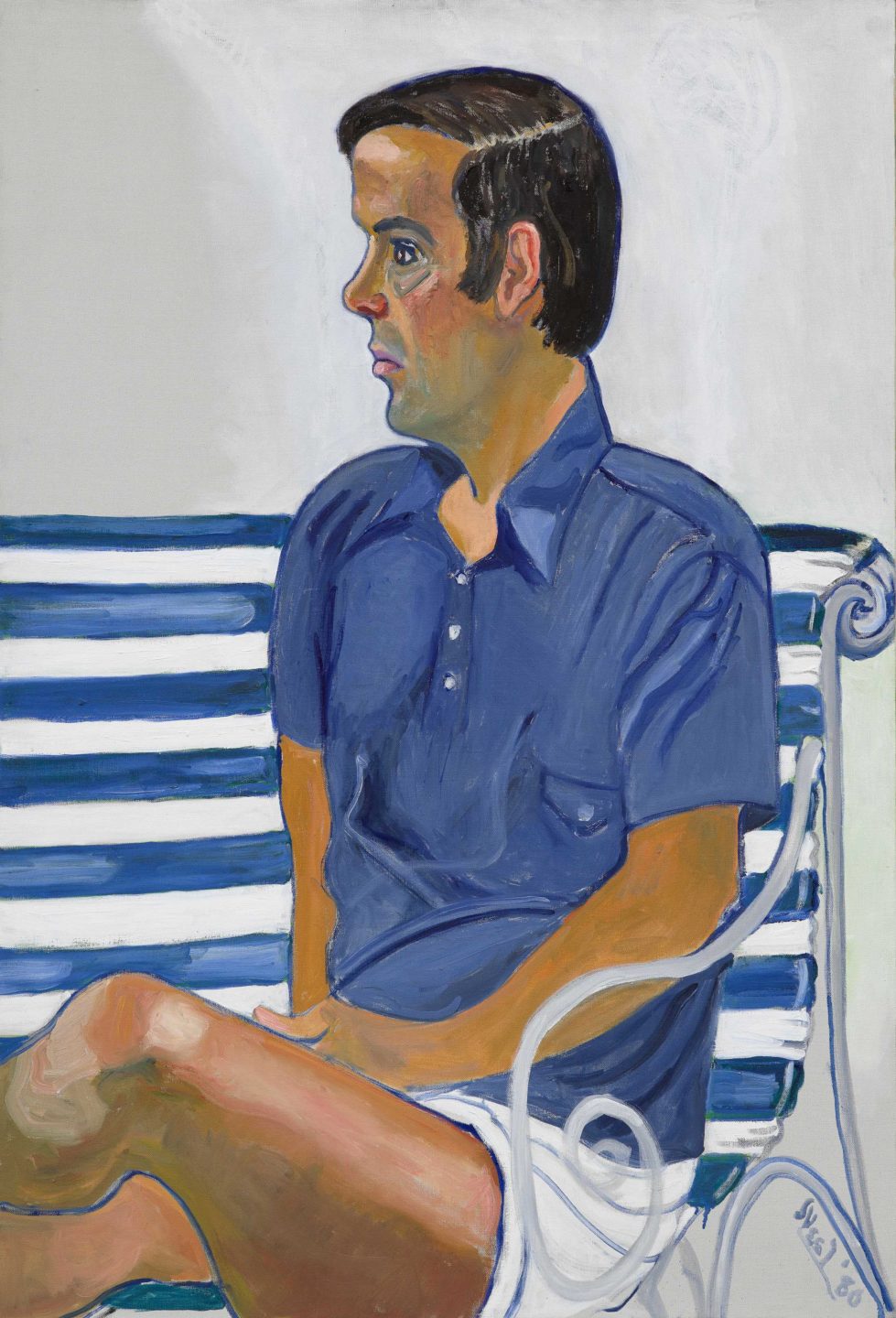 ‘It is a poignant age for a mother, and the dark shadow of a moustache was a reminder perhaps to Neel herself that her boy was, at this very moment, in the process of becoming a man.’ — Minna Moore Ede

Paintings of Neel’s elder son, Richard, show him as a teenager and as a man in his early 40s. Both are profile views, and near mirror images across time. In the earlier work, completed in 1952, Richard is depicted in a garden where, having just turned thirteen, he appears somewhat brooding. As Minna Moore Ede writes, ‘It is a poignant age for a mother, and the dark shadow of a moustache was a reminder perhaps to Neel herself that her boy was, at this very moment, in the process of becoming a man.’ In the later work, completed in 1980, Richard is again seated outside, tucked into the corner of a garden bench, casually dressed in shorts; by this point in his life he had become a successful lawyer.

A thirty-year timespan separates paintings of Richard Neel’s father, José Negron. Neel first met Negron, a Puerto Rican nightclub singer and guitarist, in around 1934 and her 1936 painting of him reveals the intensity of Negron’s glamour and Neel’s ardour. They lived together, first in Greenwich Village then in Spanish Harlem, until 1939 when Negron abandoned Neel and their three-month-old son. Neel didn’t see Negron again until 1966 when she visited San Miguel, Mexico, with Richard. While Negron wears a white shirt as he did three decades earlier, very little of the former romantic lead is evident in the later work, in which the man we see before us is no longer a nightclub singer: Negron would go on to become an Episcopal priest. 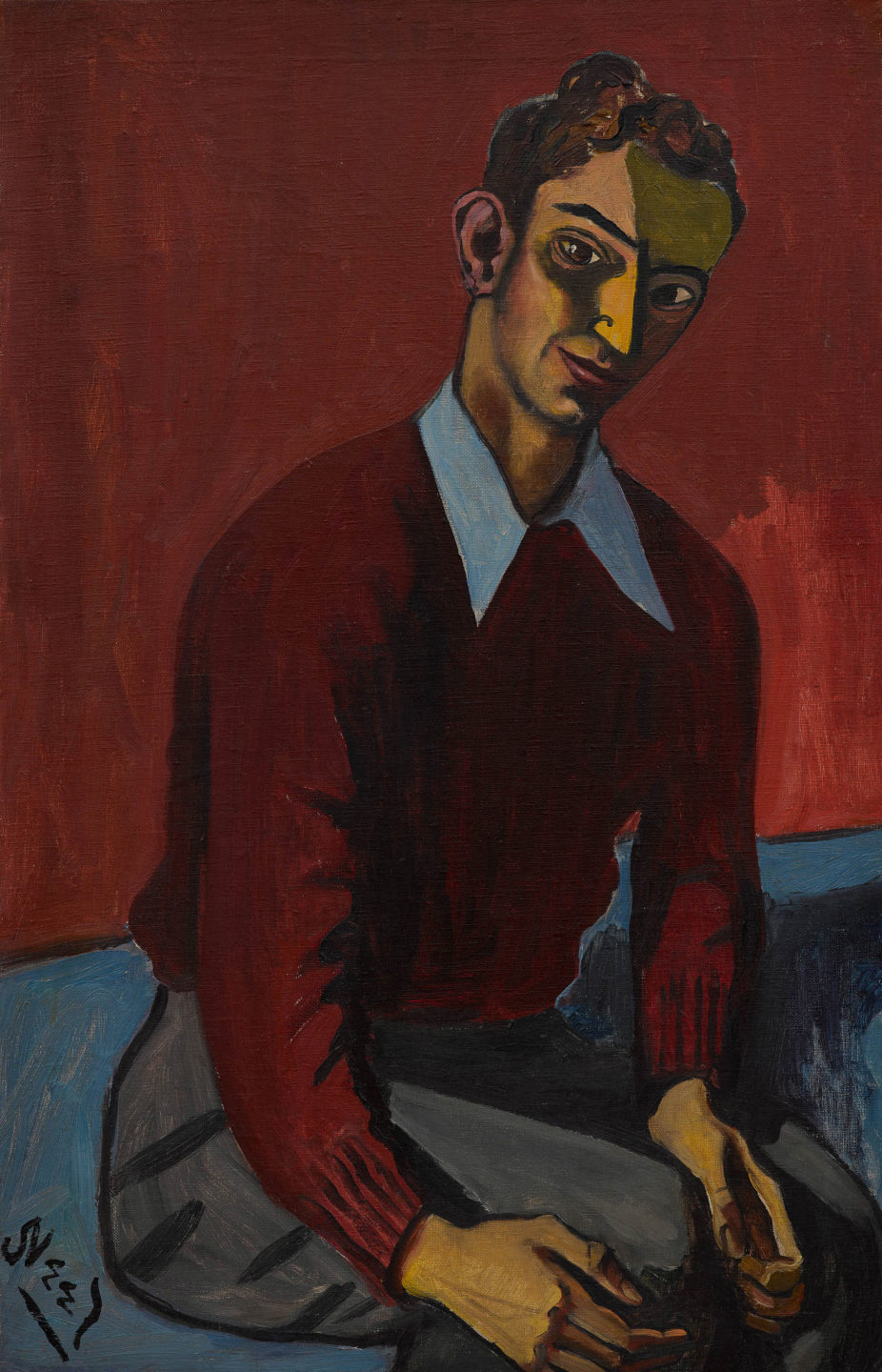 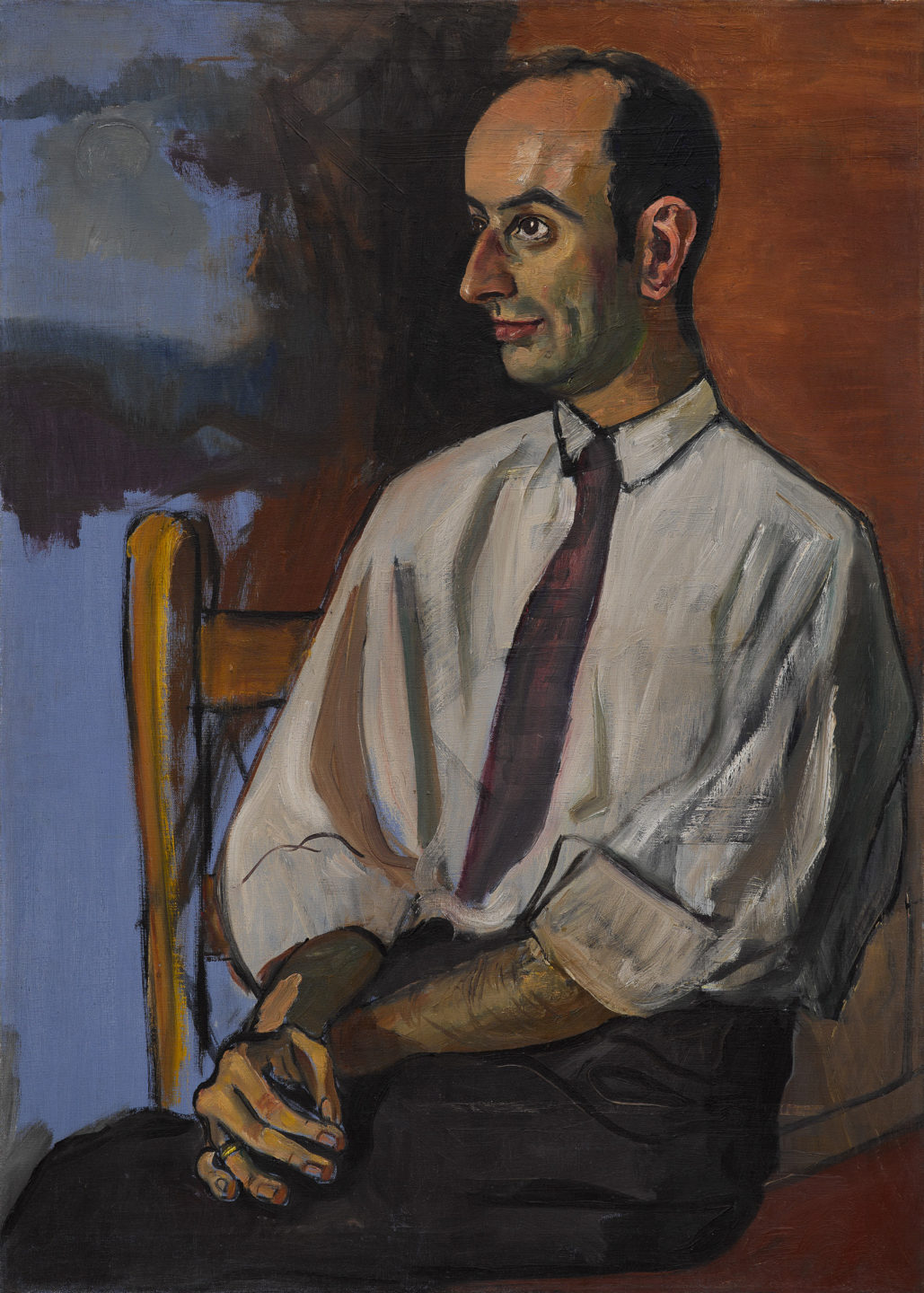 Two paintings of Georgie Neel, the child of Alice’s brother, were completed in 1947 and 1955. Minna Moore Ede writes, ‘Often it seems that Neel was struck by a particular mannerism or feature in a sitter which then becomes the starting point for a work. Georgie Neel, 1947, for example, seems to be a painting all about diagonals inspired by the young man’s aquiline nose… Her later painting of him is more naturalistic. Georgie’s prominent nose remains a point of focus but it is his sympathetically painted, endearing face that is the heart of the work.’ 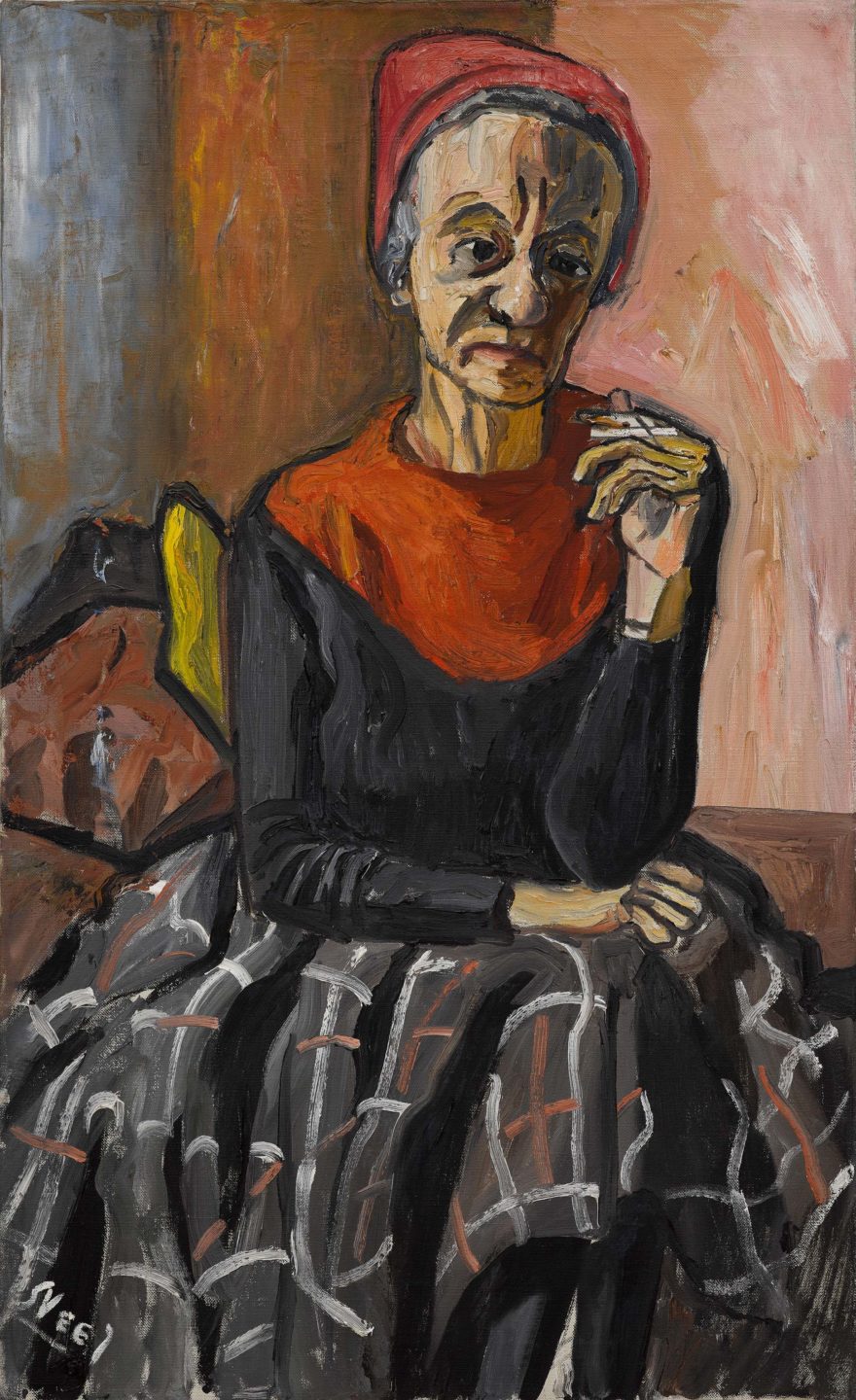 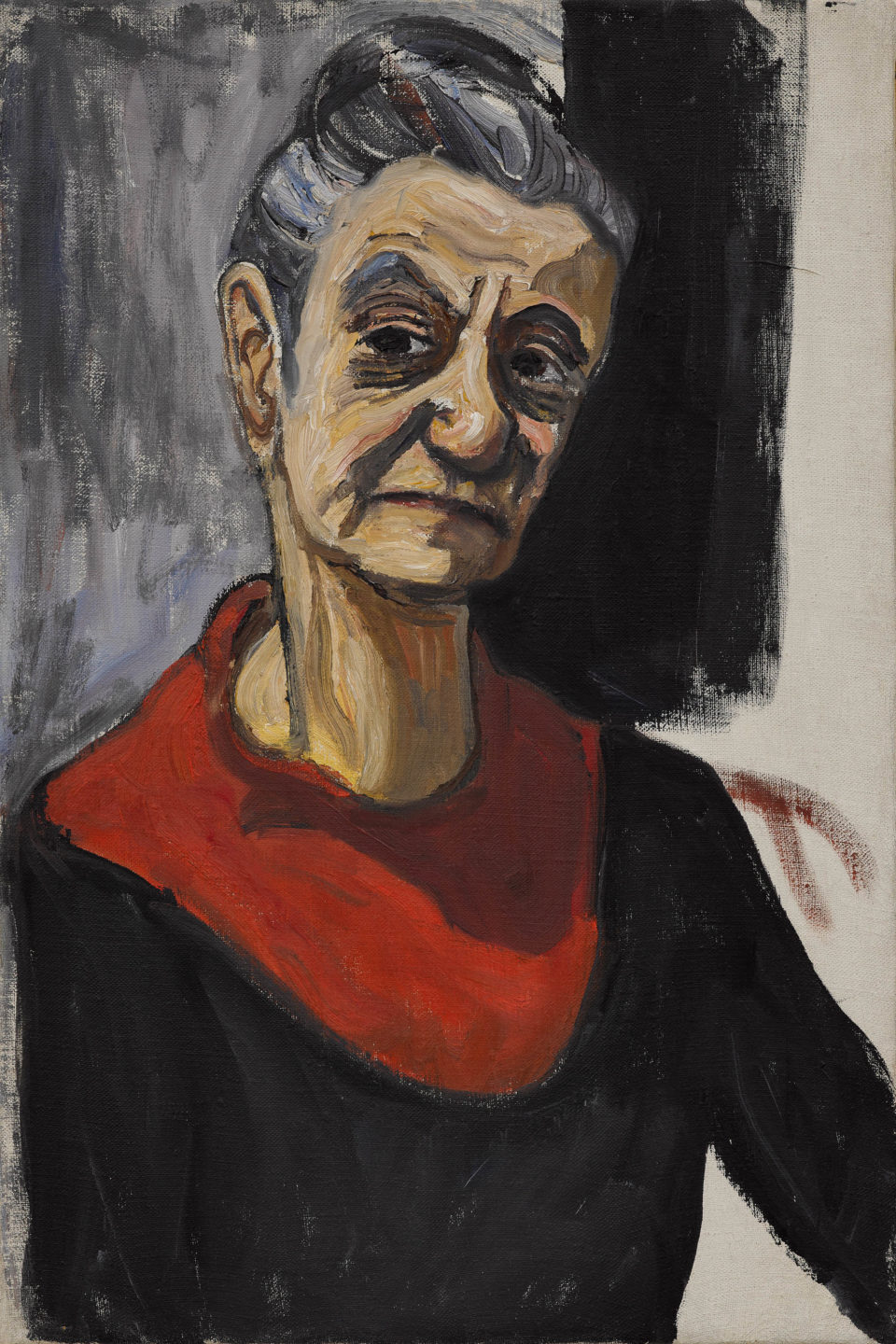 ‘Although we know nothing about Matilda, our overriding impression is of a character, a personality, a life lived hard.’ — Minna Moore Ede

Minna Moore Ede writes, ‘Neel’s two paintings, in 1957 and 1958, of a woman known only as Matilda are the most freely, loosely painted of this group… Her face is brought to life with a multitude of different colours – yellows and reds – and we see before us an eccentric old woman clothed in a variety of ill-fitting garments (the same in both paintings), leggings beneath her skirt… There is a sense of both release and curiosity in the way Neel’s paintbrush moves with zeal around the canvas, trying to capture the contours and undulations of this woman’s features, her wry smile, one eyebrow raised. Although we know nothing about Matilda, our overriding impression is of a character, a personality, a life lived hard.’

Alice Neel was born near Philadelphia, Pennsylvania in 1900 and died in 1984 in New York. Recent solo institutional exhibitions have included the acclaimed 2021–2022 touring survey Alice Neel: People Come First, organised by The Metropolitan Museum of Art in association with the Guggenheim Museum Bilbao and The Fine Arts Museums of San Francisco; Alice Neel: Painter of Modern Life, Ateneum Art Museum, Helsinki in 2016, subsequently travelling to the Gemeentemuseum, The Hague and the Fondation Vincent Van Gogh in Arles, France (2017), before concluding at the Deichtorhallen Hamburg (2017); Alice Neel: The Subject and Me, Talbot Rice Gallery, The University of Edinburgh (2016); Alice Neel: Intimate Relations at Nordiska Akvarellmuseet, Skarhamn (2013); Alice Neel: Painted Truths, a retrospective that toured to the Museum of Fine Arts Houston (2010), the Whitechapel Art Gallery, London (2010) and the Moderna Museet, Malmö (2010–11).

A major upcoming retrospective, Alice Neel: Un regard engagé, opens at the Centre Pompidou, Paris, in October 2022 (5 October 2022–2 January 2023). Work by the artist was included in the recent exhibition Women Painting Women, on view at The Modern, Fort Worth (until 25 September 2022).