‘The work plays with the idea that a photograph is a frozen moment, that the moment is held in time and that the image is held physically by the Perspex box.’ — Alex Hartley

New works from Alex Hartley’s acclaimed series The Houses bring together photographic and overlaid painterly elements to examine the idea of the viewpoint, the frame and the boundary – between interior and exterior, manmade and natural environments, public and private space, two and three dimensions.

Alex Hartley’s work shows us new ways of physically experiencing and thinking about our constructed surroundings. Iconic examples of modernist domestic architecture, photographed by the artist over the past twenty-five years, form the basis of these atmospheric monochrome works, in which the photographic image lies separated beneath hand-painted elements – describing and embellishing a verdant landscape – applied directly to a layer of semi-transparent acrylic. These include the first UK houses featured by Hartley, examples of British modernism that speak to the extremes of fate that befall early- to mid-twentieth-century architecture in the UK, some maintained in a pristine state, others fallen into disrepair.

For Hartley, a sense of narrative is key and these latest works feature additional natural elements – photographed separately, combined with the photographs of the architecture and then hand drawn onto the surface of the work. While different in character to his sculpture and architectural interventions, these works are an integral part of a career-long investigation into our sometimes uneasy relationship with the built and natural environments. He explains, ‘In contrast to the sculptural ruins I’ve been making, these works attempt to look at the way these houses (often recognised as icons and listed accordingly) are kept in frozen preserved perfection, more akin to a museum object than a dwelling. The passing of time is alluded to through my addition of accelerated and untamed nature. I think the real connection in all my work is the barrier between you and the artwork. It’s all about the tension of that, and what that tension gives rise to. It’s a good way of telling a story.’

The exhibition is also available to view via the App Store on Vortic Collect as part of London Collective, a new section on the Vortic Collect app that brings together 42 of the UK’s best commercial galleries to present exhibitions on the new extended reality app for the art world. 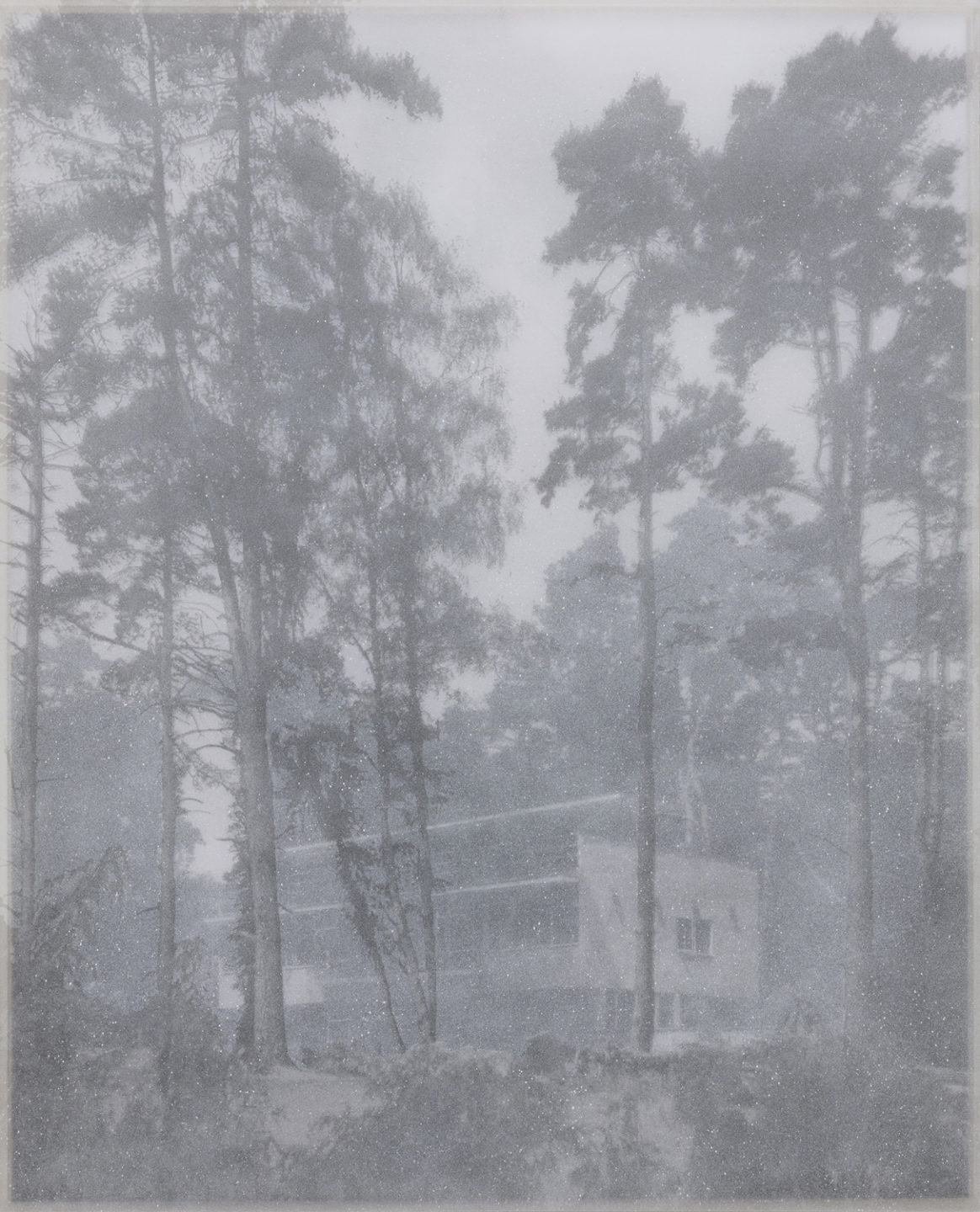 ‘The idea of approaching something obliquely is similar to the way that you might make a portrait, as a way of getting closer to the real thing…’— Alex Hartley

While these recent works straddle a line between painting and sculpture, Hartley prefers to think of them as portraits, explaining that ‘because of my twenty-odd year obsession with these houses, they do have personalities to me. And often, while many of these buildings are very famous, the image of them you might find in a magazine or architecture journal doesn’t seem to me to reveal the personality of the building. I think that’s partially why I was driven to take on those angles and viewpoints, because the idea of approaching something obliquely is similar to the way that you might make a portrait, as a way of getting closer to the real thing, a way of giving a truer story within a single image. The feeling of being uninvited and the vulnerability of the house is all part of that. I think of the actual life of the house as being the subject of the work.’

Greenside (Bracken House) by Connell, Ward and Lucas. Completed in 1937, and bearing the influence of Le Corbusier and Mies van der Rohe, the house was destroyed by its owner in 2003, despite being listed by Historic England as a building of special interest. It is now regarded as one of England’s ‘Lost Moderns’. 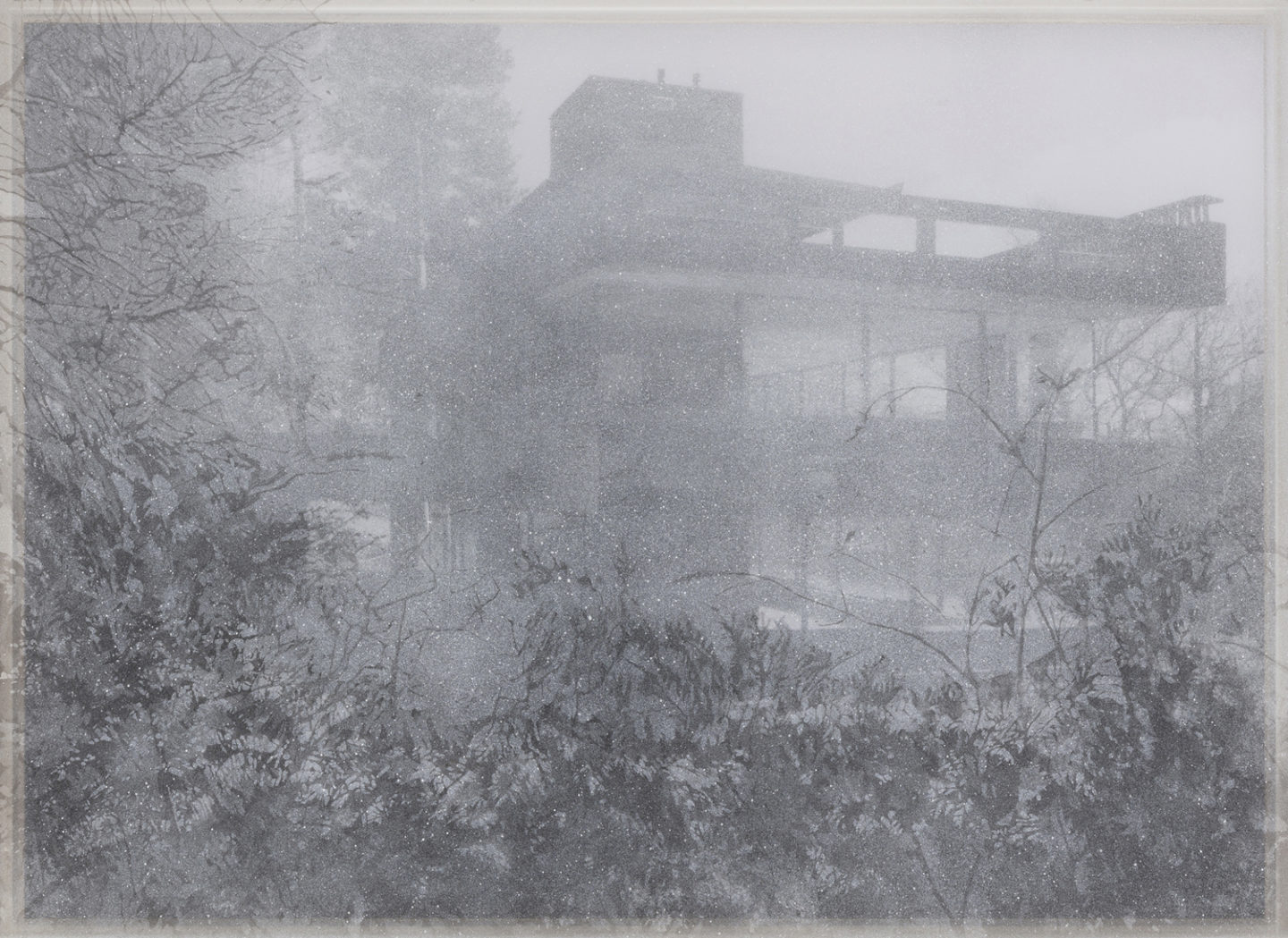 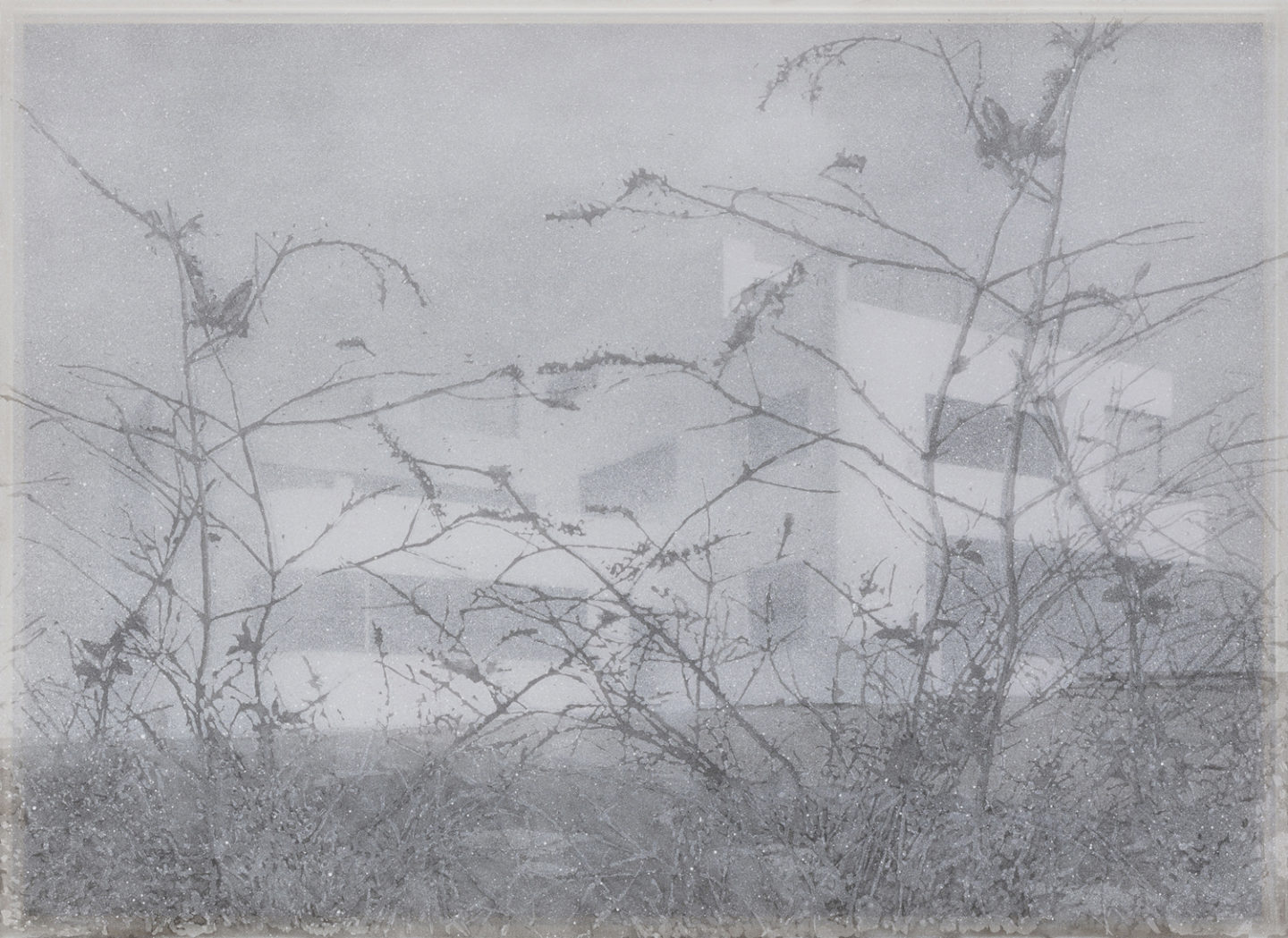 ‘I do think about what this type of modernism once stood for and what it stands for now, and I think there is an interesting story in that.’— Alex Hartley

Completed near Selkirk in the Scottish Borders in 1972, Bernat Klein Design Studio is perhaps the most celebrated work of architect Peter Womersley. It was commissioned by the textile designer Bernat Klein as a workspace for his business and lies adjacent to his home, High Sunderland, also created by Womersley, in 1958. Designed to connect harmoniously with its surroundings, its horizontal cantilevers contrasting with the verticals of surrounding trees, it bears a resemblance to Frank Lloyd Wright’s seminal Falling Water. An icon of the last century, it has spent most of this one in urgent need of renovation and remains on Scotland’s Buildings at Risk register.

High Cross House, situated on the Dartington estate in Devon, is one of the earliest International Style buildings in the UK. It was commissioned by William B Curry who, when he was offered the role of headmaster at the newly created Dartington Hall School, suggested William Lescaze as the architect to design the new headmaster’s residence. Completed in 1932, High Cross stands as a testament to Curry’s belief in a modern society and to ethos of Dartington, which began in 1925 and encompassed a holistic approach to education, farming, arts and craft. The building itself was restored in the 1990s, taken on the by National Trust in 2012, but closed to the public two years later.

Hartley comments, ‘I do think about what this type of modernism once stood for and what it stands for now, and I think there is an interesting story in that. The people who buy these buildings now, how do they keep them? So much of their existence is about renovation and repair. Of course, today you can repair something to look pristine, to look like it’s always been held in this moment. I’m interested in all of that: what is the realistic lifespan of a building like that, what do you have to do to maintain it? Given that they’re not all treated like monuments, how are they liveable, and how, in the coming crises of the world, will they be overtaken?’ 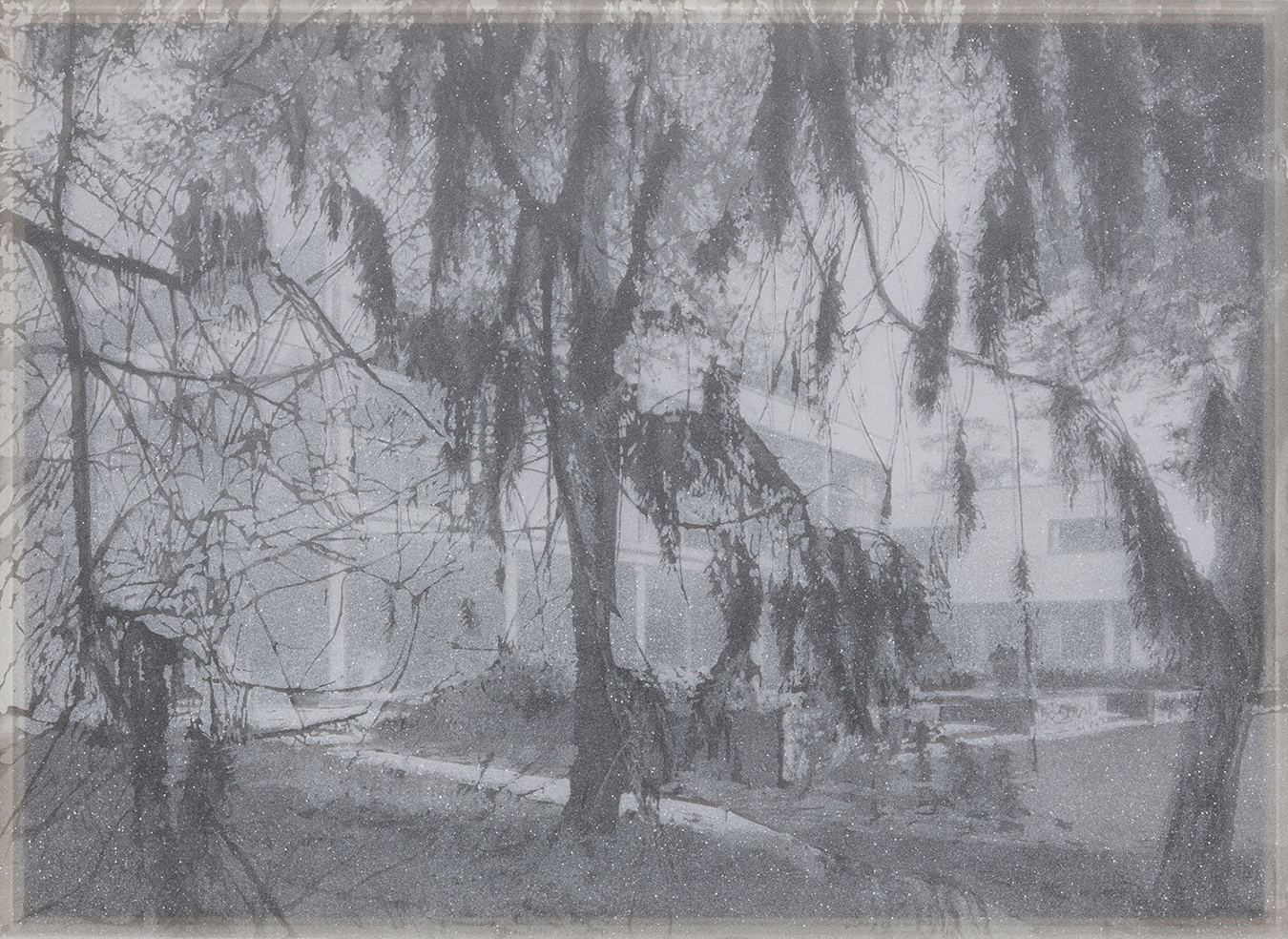 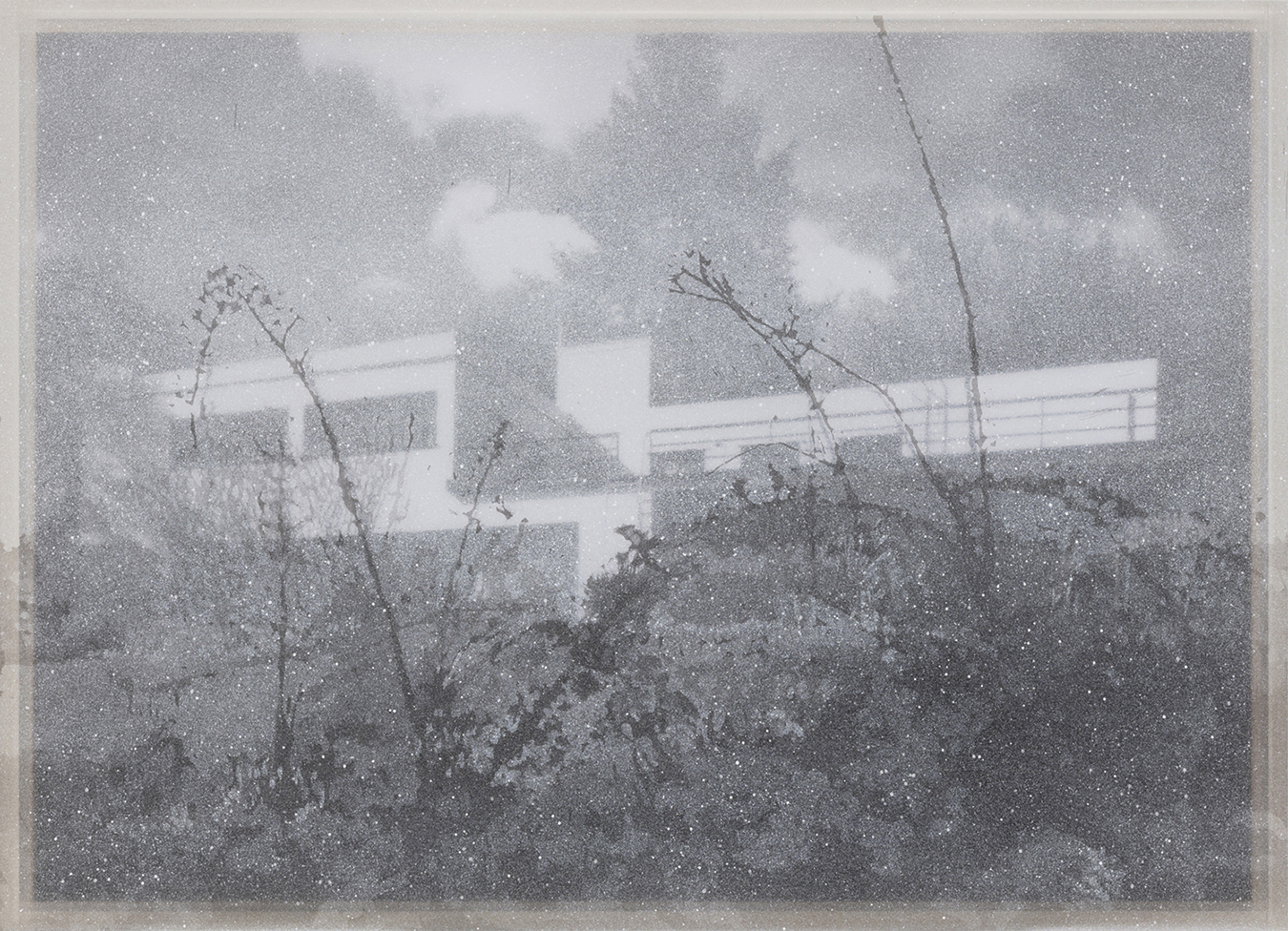 ‘The passing of time is alluded to through my addition of accelerated and untamed nature.’— Alex Hartley

The Homewood Jungle, 2019, features an iconic example of British modernism, Patrick Gwynne’s masterpiece The Homewood, which the architect completed in 1938 as a home for his family. Situated in a woodland garden in the Surrey countryside, it is now owned and cared for by the National Trust.

Pen Pits is a Grade II* listed building, completed in 1935 by PJB Harland in Pen Selwood, Somerset, for the composer Sir Arthur Bliss. A two-storey building in the International Style, it sits within the Pen Pits quern quarries, a series of bowl shaped pits which were used as stone quarries during the Iron Age, Roman period and Middle Ages, and now a Scheduled Ancient Monument. 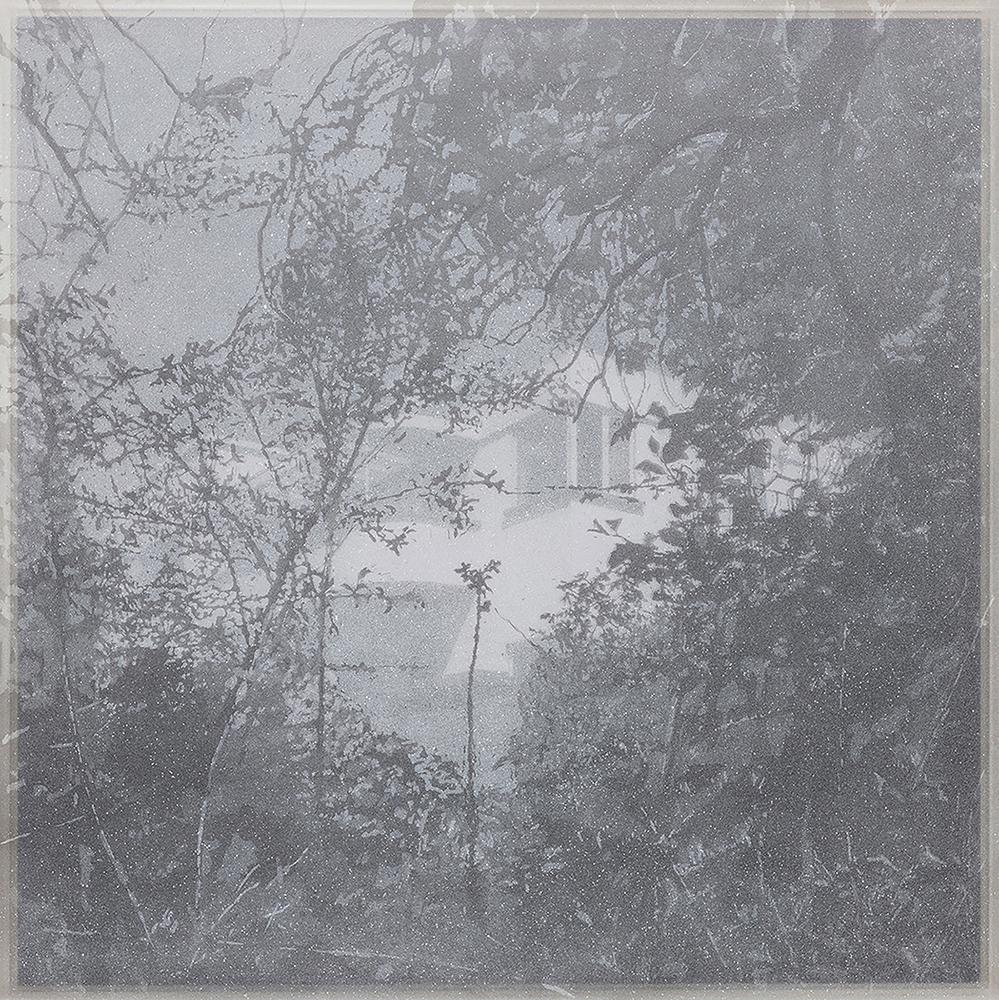 Encapsulated in The Houses are conflicting ideas of the modernist ideal and its legacy, these decades-old beacons of progression – architectural, cultural, social – appearing spectral, almost dreamlike in their delicate greyscale tones. Caught up in them, too, are Romantic ideas of the picturesque as seen also in Hartley’s ongoing Ruin series, such as his architectural intervention for Wharf Road’s waterside garden, A Gentle Collapsing II, 2016, which, resembling an International Style domestic building apparently abandoned to the elements, offered poignant reflection on themes of entropy and decay.

The source material for the series commenced while Hartley was living in California at the beginning of the 2000s. Often frustrated by the fences and hedges that have grown up to screen these buildings since their construction half a century ago, the artist found himself ensnared in trees and undergrowth in a bid to capture the ideal image. This in turn led to his 2004 book LA Climbs: Alternative Uses for Architecture, published by Black Dog Publishing, in which Hartley went a step further by climbing the buildings themselves and recording his unconventional routes through the city. While modernist architecture has been a constant touchstone, amplified in Hartley’s recent work is a sense of narrative, of the viewer having arrived at a situation of ambiguous cause and uncertain outcome.

While The Houses are intact, yet to be reclaimed by nature, they are preserved only through the concerted efforts of human intervention. The works hinge on the glass-walled pavilion giving rise to the desire for boundaries of other kinds and an ensuing sense of disquiet between architecture – angular, airily modern – and nature which, as evoked by the artist, often appears to engulf and overcome the depicted buildings, heightening a sense of ambiguity. 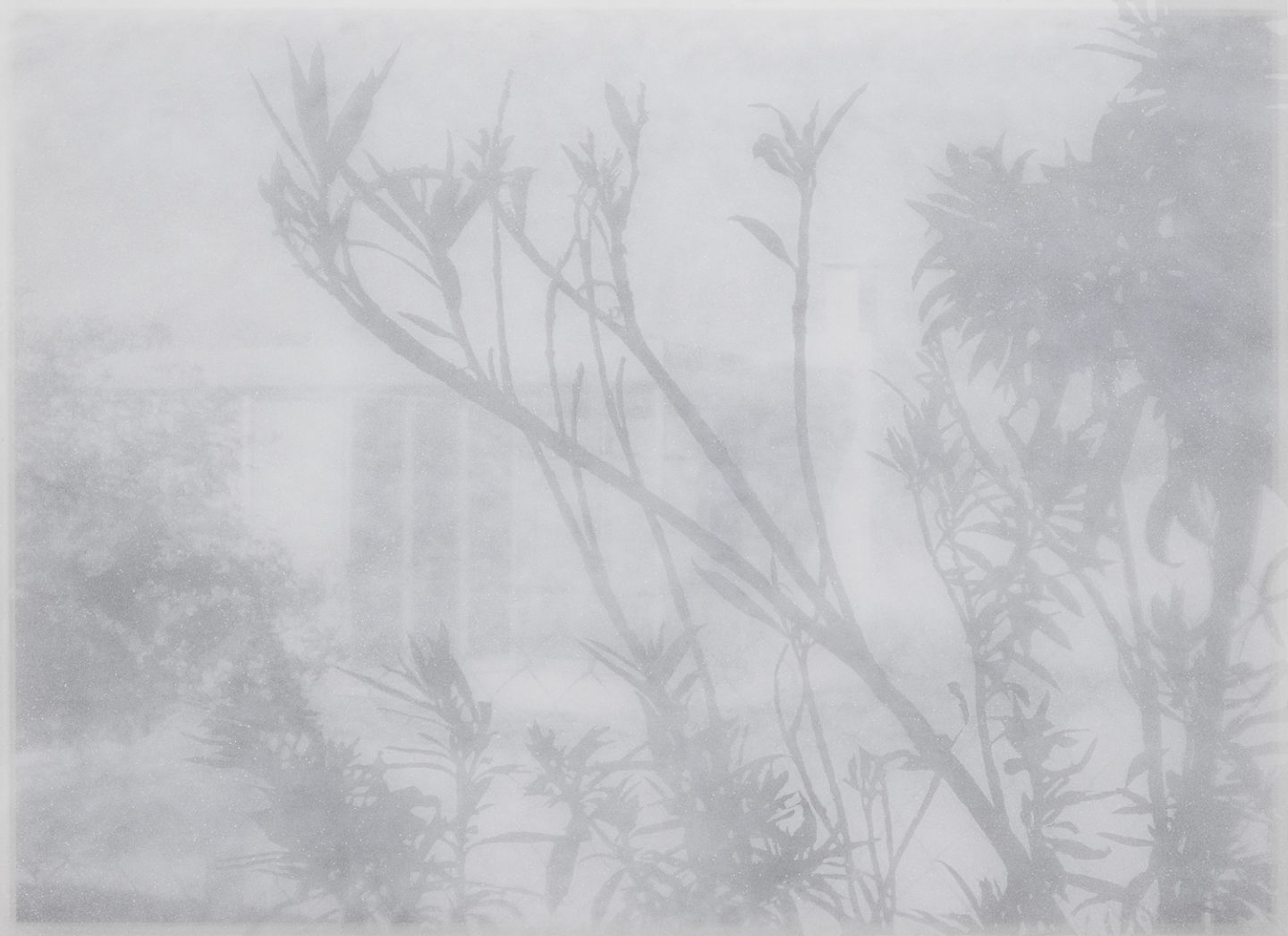 Grace Miller House in Palm Springs is an early building by Richard Neutra, completed in 1937. The second ‘desert Modern’ house built in Palm Springs, and now the earliest surviving example, it was built for Grace Miller, a dance therapist. This small gem of a house had fallen into disrepair when Hartley first photographed it in 2001. It has now been beautifully restored, but whereas it was once an isolated retreat, it is now part of Palm Springs’ suburban sprawl. 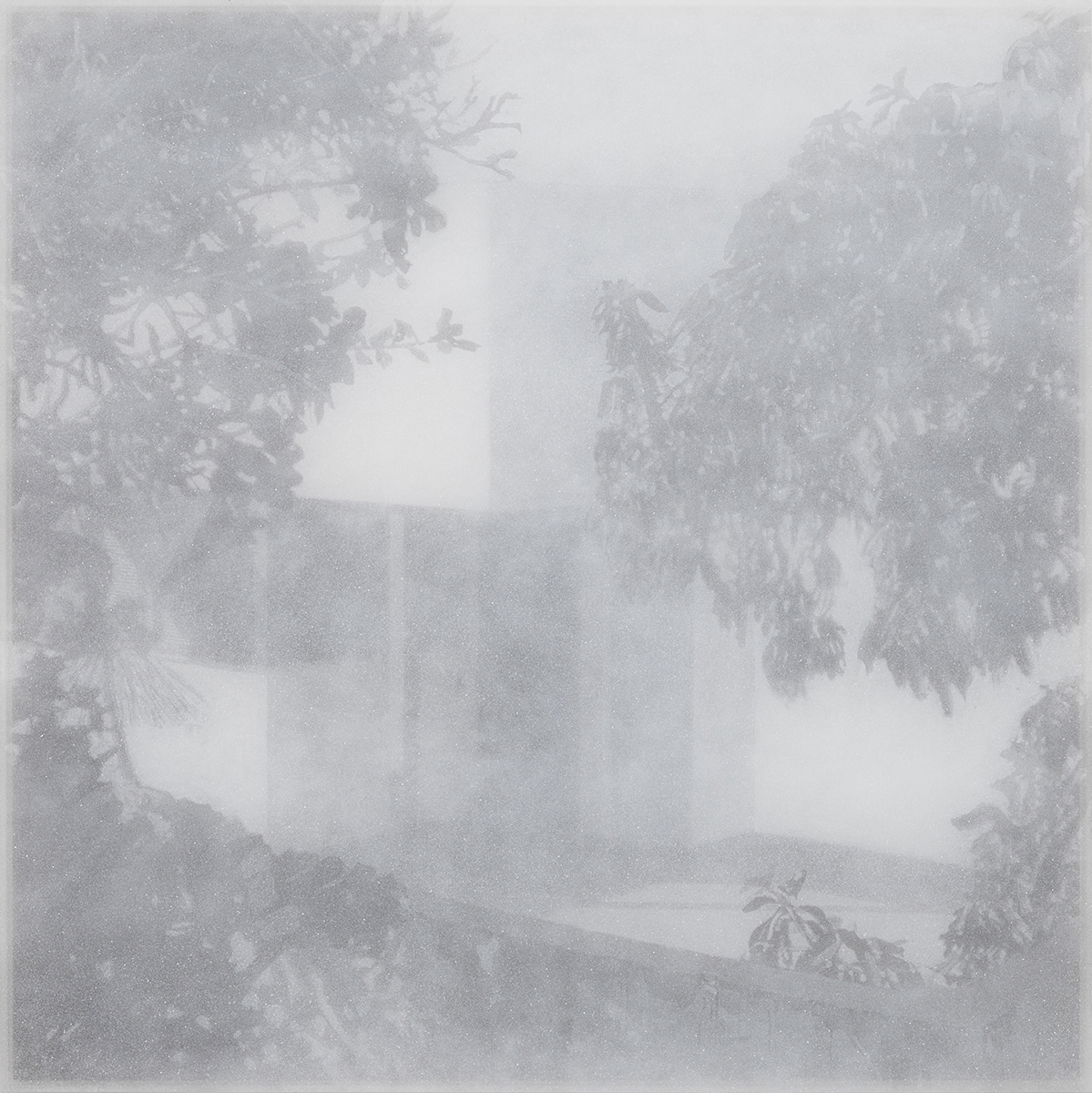 ‘I think the real connection in all my work is the barrier between you and the artwork. It’s all about the tension of that, and what that tension gives rise to.’— Alex Hartley

Physician and naturopath Philip Lovell commissioned two icons of modernist architecture: the Lovell Beach House in Long Beach, completed by Rudolph Schindler in 1926; and this house, Lovell Health House, completed by Richard Neutra in 1929. An icon of International style and the first true steel house in the USA, it is built on a steep hillside in the Los Feliz Canyon and signifies the completion of the move from arts and crafts to modernism. Somewhat ironically, this house, which was built for a doctor, was used as Pierce Morehouse Patchett’s house in the 1997 film LA Confidential.

Born in 1963, Alex Hartley has exhibited extensively both nationally and internationally at venues including KØS Museum of Art in Public Spaces, Koge, Denmark (2019); Royal Academy of Arts, London (2017); Contemporary Arts Centre, Ohio, US (2014); Louisiana Museum of Modern Art, Denmark (2013); Fundación Canal, Madrid (2008); and The National Museum of Art, Osaka, Japan (2001). In 2017, the artist’s work featured in the Yokohama Triennale while the monumental, site-specific installation Wall was on view as part of the Folkestone Triennial until November of the same year. In 2013, Hartley undertook a residency with the National Trust for Scotland. 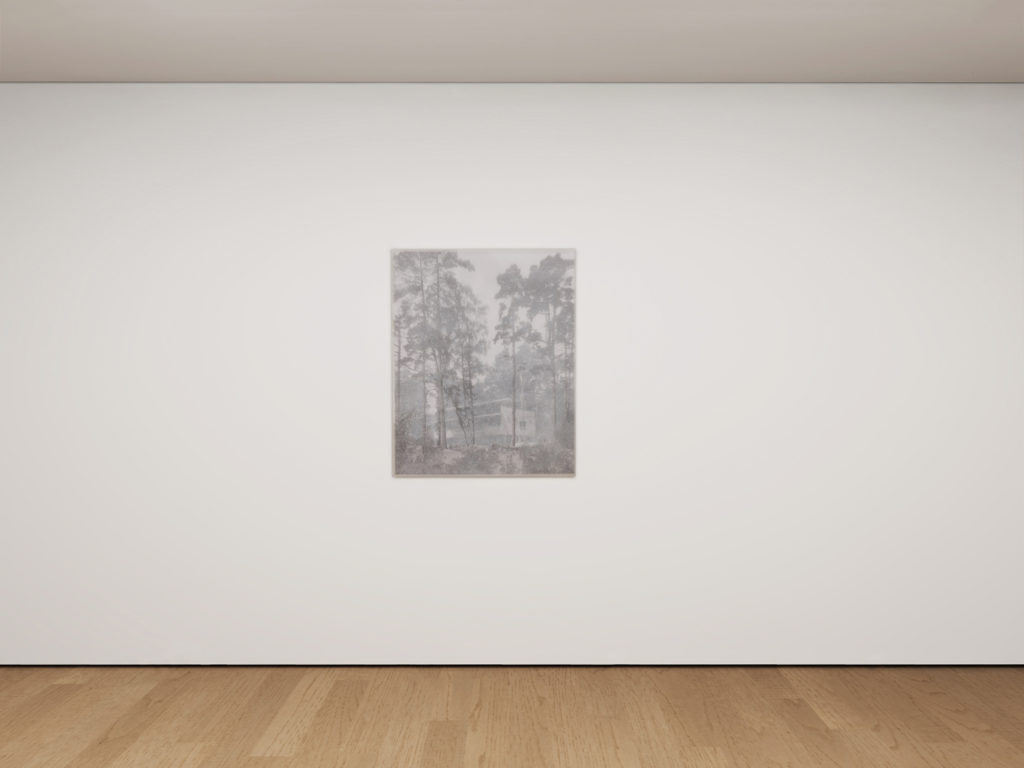 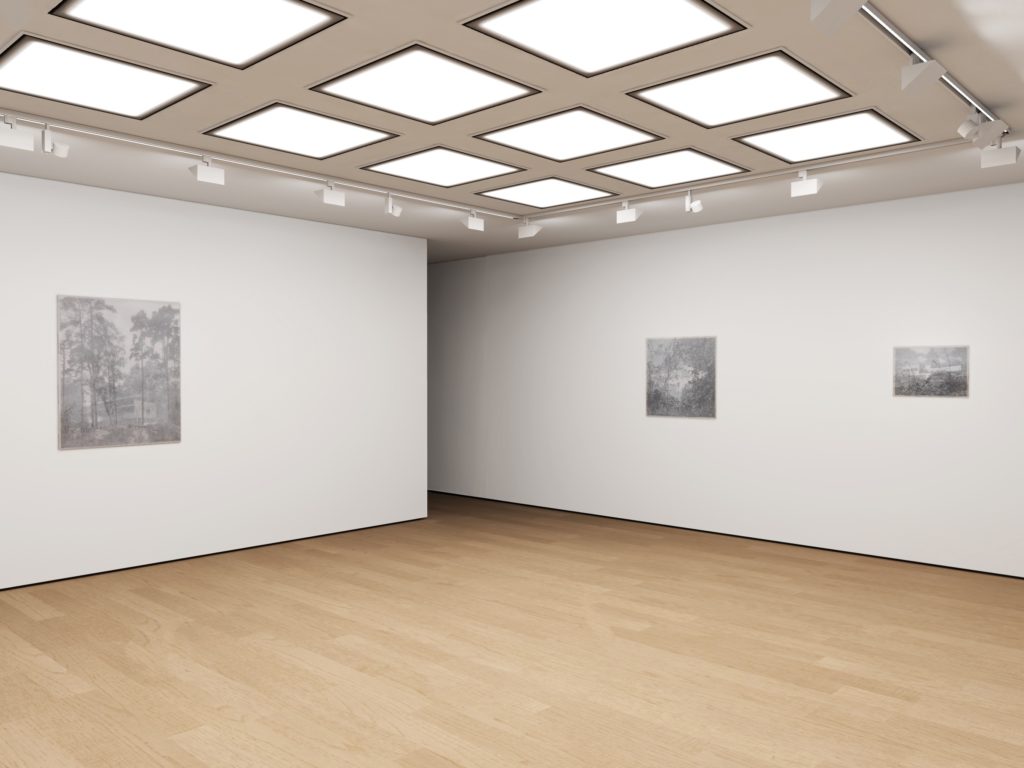 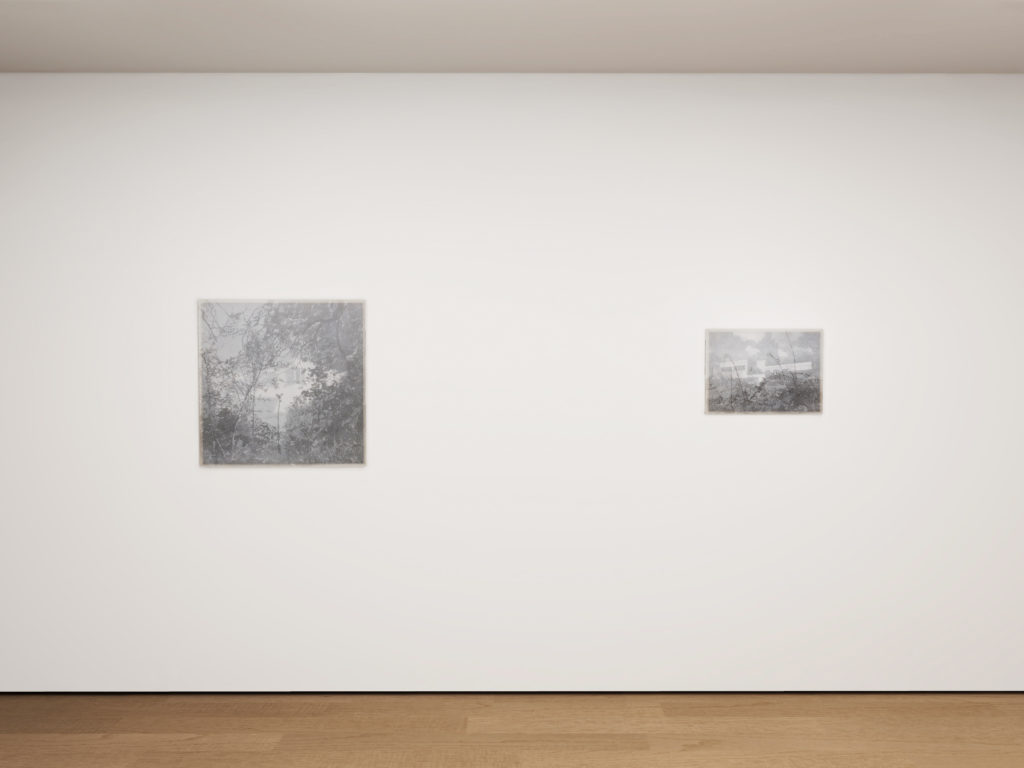 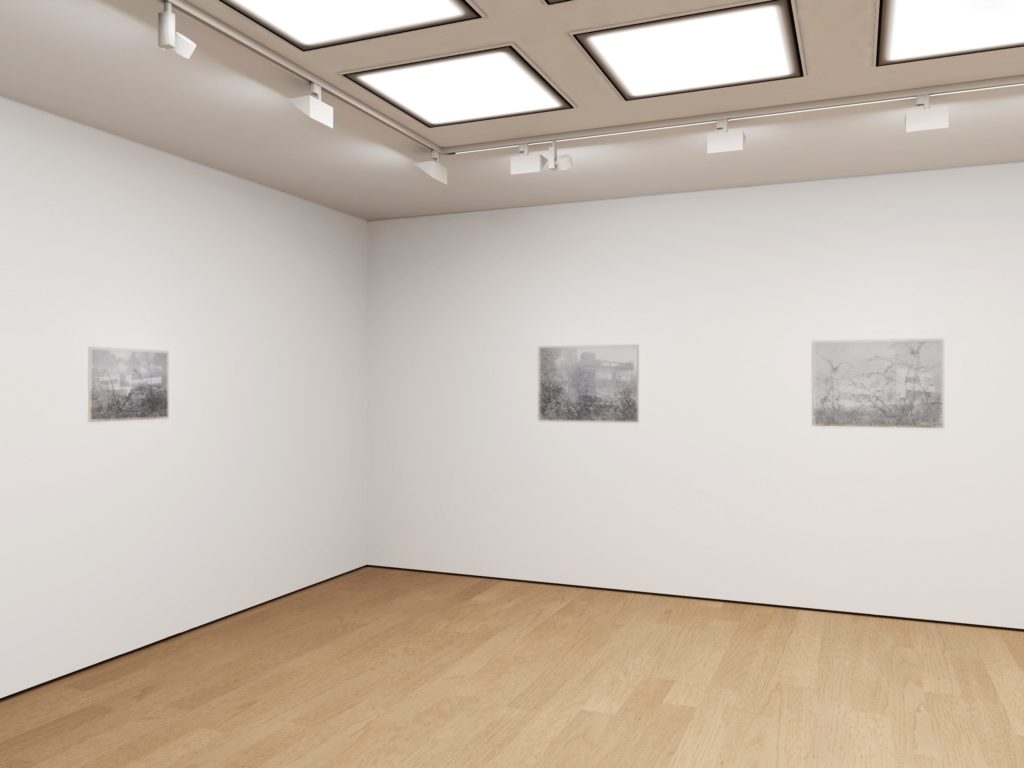 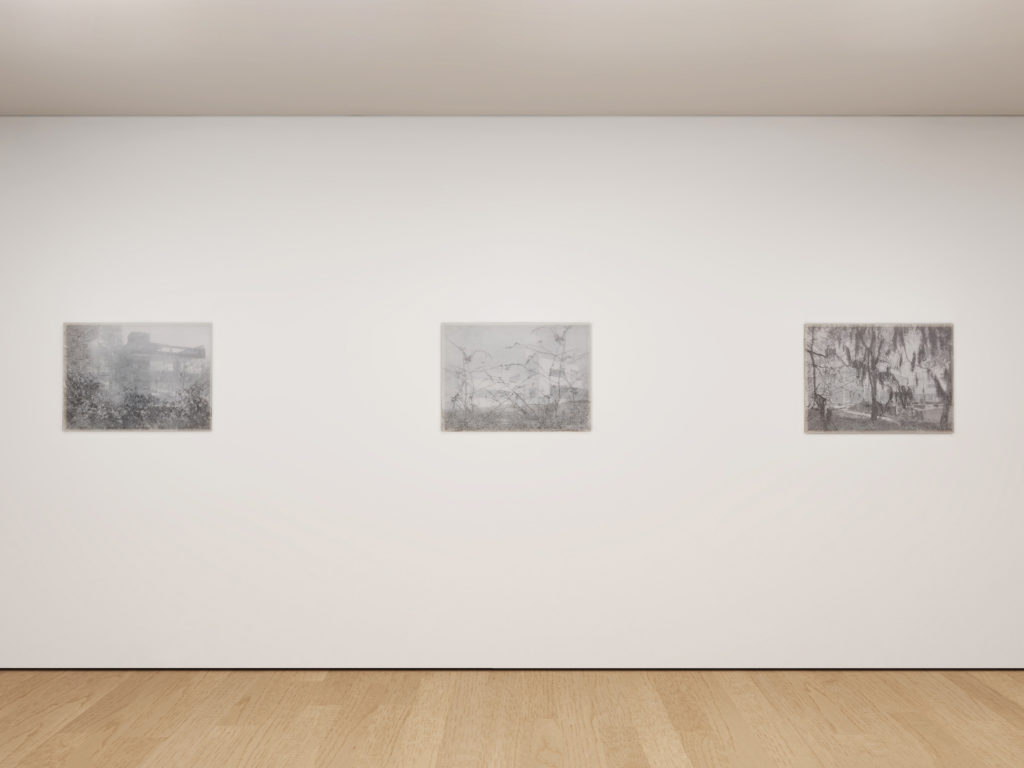 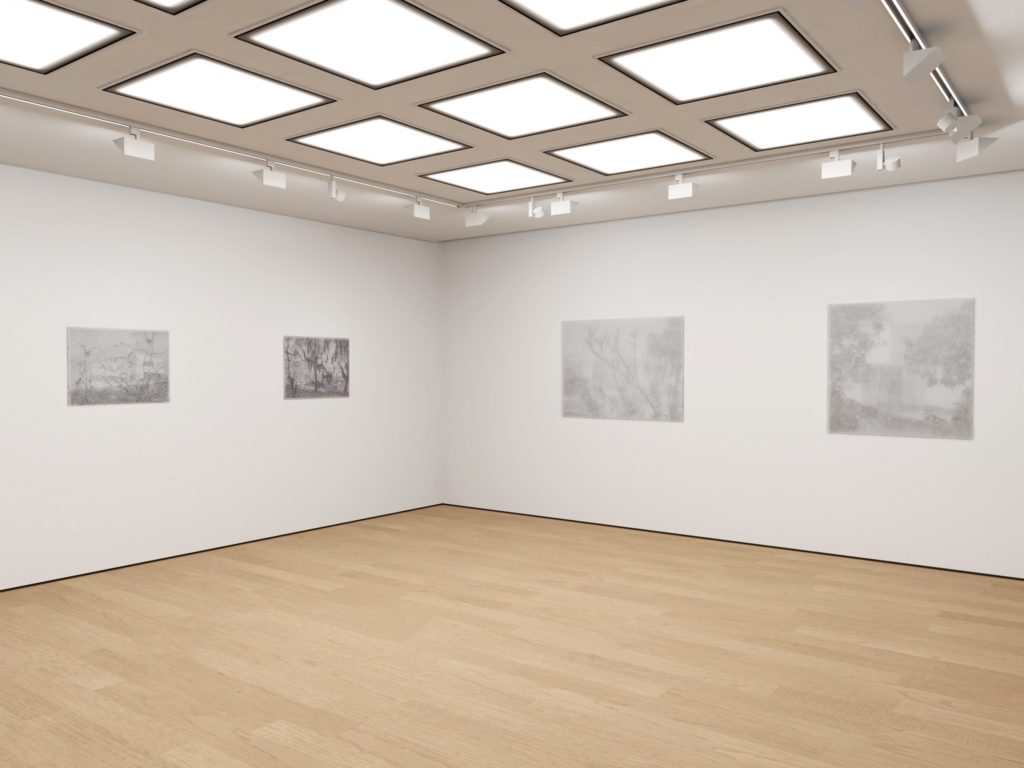 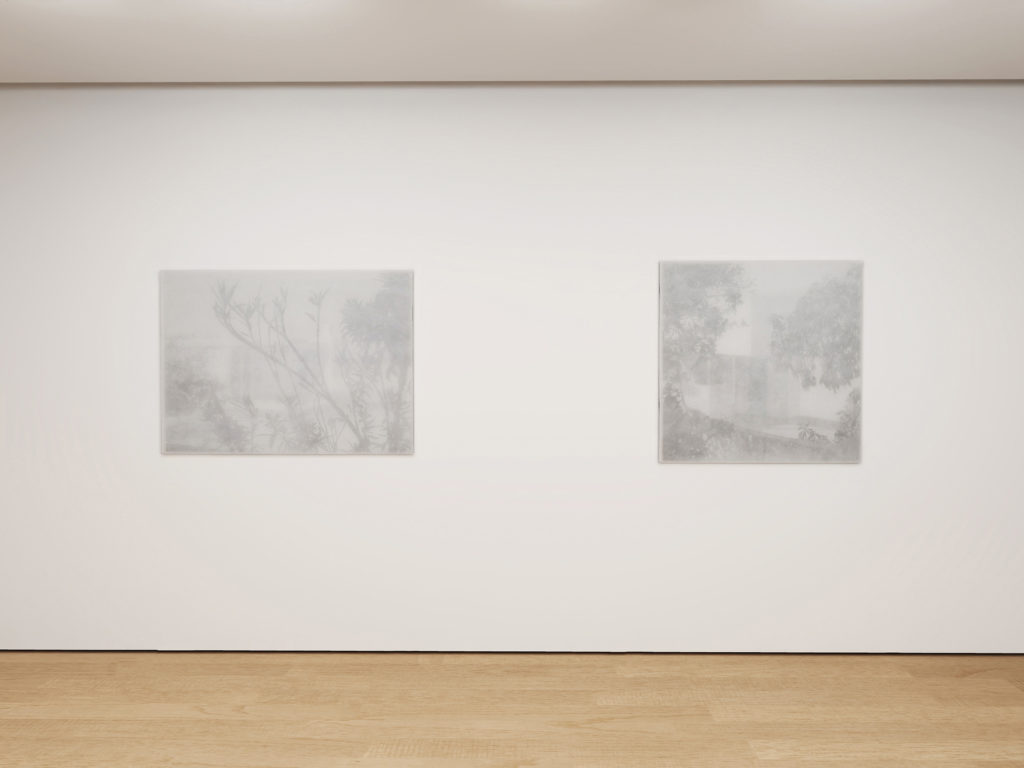 About London Collective on Vortic Collect

London Collective is a section on the Vortic Collect app, bringing together 40 of the UK’s best commercial galleries to present exhibitions on the new extended reality app for the art world.

London Collective consists of 42 art dealers and gallerists who came together in recognition that this is a defining moment of change in how art is accessed. Whilst a number of London galleries have recently reopened, travel and other restrictions mean many people are still unable to visit exhibitions in person.

In the London Collective section of the Vortic Collect app, galleries will show specially curated presentations, providing them with an additional virtual space to complement their physical gallery programmes.

The new initiative enables galleries to support one another by sharing their audiences and enables visitors to simulate the experience of visiting multiple London gallery locations.